Dialing In the Stylized Italian Riviera Waters of Pixar’s ‘Luca’

Effects supervisor Jon Reisch drew on his experience as a guitarist to develop ocean wave simulation controls, much like sliders on an equalizer, to hit director Enrico Casarosa’s mark for an expressive, lyrical Japanese woodblock look, in the studio’s upcoming animated feature. 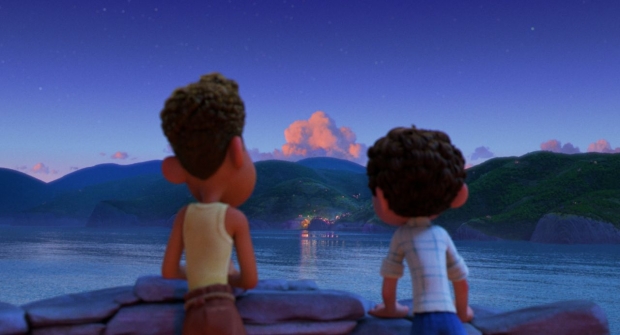 Premiering June 18 on Disney+, Disney and Pixar’s Luca, according to director Enrico Casarosa, is “about the friendships that change us, a love letter to the summers of our youth -- those formative years when you’re finding yourself.” Set in a beautiful seaside town on the Italian Riviera, the film tells the story of Luca, a young Italian boy who along with his newfound best friend, Alberto, experiences an unforgettable summer filled with gelato, pasta, and endless scooter rides. But all the fun is threatened by a deeply-held secret: they are both sea monsters from another world just below the water’s surface.

To capture the viewpoint of a 13-year-old boy and the carefree idea of summertime in an idyllic Italian seaside setting, the director envisioned a truly nostalgic era with a stunning painterly style. “The artist’s hand is something I think a lot about,” says Casarosa. “We try to bring some of that warmth and imperfection to the computer animation. And our story takes you to a place that’s fantastic, but also inspired by where I grew up.”

The look of the film is influenced by Japanese animation and artistry, specifically Japanese woodblocks. According to production designer Daniela Strijleva, “Enrico would draw these simple, sinuous shapes of reflections in the water that looked like traditional woodblock prints. With that in mind, we were challenged with simplifying the look of a 3D film, which was super fun to do—hitting a certain level of caricature that’s true to Enrico’s style. It’s very expressive and lyrical.” A key member of the film’s core creative leadership is Luca’s effects supervisor, Jon Reisch. Reisch joined Pixar in 2004 during the production of Cars; in addition to effects development, shot, and supervising work on a host of studio films, he led effects on Domee Shi’s Oscar-winning short, Bao, before joining Luca early in development.

As effects supervisor, Reisch worked closely with Casarosa, Strijleva, and director of photography for lighting Kim White to help craft the visual language of the film’s effects. He also provided daily artistic and technical direction for his team throughout the course of shot production.  Part of the challenge for him and the effects team was embracing the hand-crafted, more 2D-inspired feel of the film and supporting that aesthetic and storytelling with each of their effects elements. All told, there are more than 800 effects shots on the film. “Typically, 30-40% of the shots on any given Pixar film are effects shot, but with all the water on this film, taking place on the Mediterranean Sea, we were closer to 60-70% of the shots in the film,” he notes. “It was just a huge amount of work. And I'm super proud of my team for delivering it, doing all this work from home from the first shot to the last.”

On an animated film, the effects team is primarily responsible for all the natural phenomenon you see. On Luca, that meant the sea that the story takes place in and around, all the waves and splashes, as well as fire smoke, rain, dust, and debris, even the pasta Luca and Alberto eat at a dinner with Giulia and her father Massimo, who live in the town of Portorosso where much of the film takes place. But the biggest area of effects on the film was water, and the biggest challenge was designing water effects where photorealism was not the goal. “Early on in the process, it was really clear that Enrico had this vision of a beautiful, simplified elegance for the film,” Rausch explains. “And that elegance was inspired by leaning into our 2D influences as well as delivering on all that visual richness we expect from ourselves at Pixar. There were a few key touchstones we kept coming back to. Not just the artistry of Miyazaki and Studio Ghibli, certainly, but also these Japanese woodblock paintings with their suggested details and simplified forms and shapes; they have very clear silhouettes and sinuous reflections that we wanted to capture in the look of our stylized water. On Luca, we really wanted our effects elements not just to integrate into the stylized world, and the plausible, but to truly enhance the world with their visual language, ultimately supporting the storytelling of the film.”

“If we could draw a picture of water with 50 lines, Enrico would want us to draw it with three,” Reisch continues. “We really wanted to distill down the essence of what he was trying to go for, and make sure we were getting more caricature, this simplified elegance of silhouettes in our splashes and in the shape of water itself.  It was an intentional decision from the get-go and everybody, from creative leadership on down to the artists, had to go through this learning process of really understanding that, and adjusting to this new style. It was like, ‘Hey, this is what you've been doing on past films. Looks great, but we're going in this other direction.’”

For a studio with an effects pipeline geared toward photorealism, “elegant simplicity” was quite hard to achieve, for the most part, because it required a change in artistic thinking as much as development of new tools. “At Pixar, especially in the effects department, we're very comfortable with realism,” Reisch shares. “We knew how to achieve that. Look at the beautiful water work in Finding Dory, or the gritty, grounded realism of Cars 3. Honestly, stepping towards stylization with our effects was sort of a hard left turn away from everything we knew, all our instincts as effects artists, and all the techniques that we perfected and relied on. Even our effects tool set, which relies heavily on physically based simulations. All those forces were pulling us back towards layering on details and defaulting into this more photorealistic look that we knew how to achieve and that the tools actually make very simple to achieve.”

“Our whole world was being turned upside down,” he continues. “All the answers that had been right on previous films were wrong for this film and the new look we wanted to deliver.” What the team needed was needed was a new approach, and new tool controls, to hit Casarosa’s creative mark. For Reisch, that new approach borrowed from his years as a musician. “I'm a guitarist and I’ve played in bands for 25 years,” he reveals. “I had this thought about trying to control the ocean look almost like you control a graphic equalizer to bring up and down certain frequencies in the music you're listening to.” So, by programming the ocean toolset to provide direct control over different wave frequency bands through sliders that allowed mixing in specific wave sizes, they were able to produce more stylized, less real-world physics and oceanographic data-based wave simulations. “That started to really crack open this idea of injecting artistic control into the wave effects,” he adds. “Now we could dial in less of this high-frequency detail and emphasize more of those middle frequencies, where we started to see those beautiful sinuous reflections that we were chasing based on the Japanese woodblock prints.”

“Hopefully,” Reisch concludes, “this all gives you a different kind of feel experiencing the film. There's sort of a childlike wonder to Luca, and the visual analogy of pushing towards a more storybook, illustrative look, with more art-directed, stylized effects, was challenging, but highly rewarding. The amount of work we've put into the water effects here, it all felt like such a new and interesting challenge for us to tackle.  I'm hoping that employing this more expressive and artistic language is something that our next films can pick up on, because it sure feels like the right direction for us to push into. It's certainly beautiful.”