Delve into the Making of Blender Short, ‘Cosmos Laundromat’

Learn 10 things about open-source Blender technology and Project Gooseberry in the making of the Blender Foundation’s ‘Cosmos Laundromat – First Cycle.’ 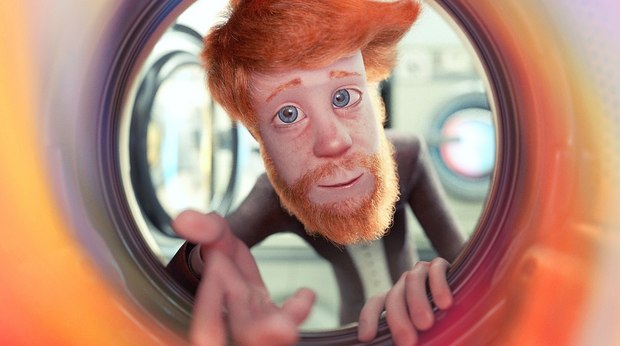 The SIGGRAPH 2016 Computer Animation Festival Jury’s Choice winner Cosmos Laundromat – First Cycle was developed as a pilot by the Blender Foundation for what plans to be the first open-source animated feature film production.

Originally code-named “Project Gooseberry” by its Blender team based in the Netherlands, the 10-minute CG-animated short film was produced by Ton Roosendaal, and follows Franck, a depressed sheep, who sees only one way out of his boring life until he meets with the quirky salesman Victor, who offers him any life he ever wanted.

Here’s the official synopsis, and, if haven’t seen it yet, you can watch the full short in the player below:

On a desolate island, a suicidal sheep named Franck meets his fate…in the form of a quirky salesman named Victor, who offers him the gift of a lifetime. The gift is many lifetimes, actually, in many different worlds -- each lasting just a few minutes. In the sequel to the pilot, Franck will find a new reason to live…in the form of a bewitching female adventurer named Tara, who awakens his long-lost lust for life. But can Franck keep up with her?

For those unfamiliar with open-source Blender technology and Project Gooseberry, the endeavor has been chronicled in detail on the Gooseberry site. Here are 10 things from Project Gooseberry you might not know about the making of Cosmos Laundromat – First Cycle:

1) The team offered weekly livecasts on its YouTube channel during production to go over various processes. There are more than 150 videos, including the one below:

2) Everything is licensed under Creative Commons Attribution 3.0, meaning the art of Cosmos Laundromat is free to access, share and use as a guide. Find it all on the Blender Cloud.

3) Three production pipeline tools were developed as part of the project: BAM, Flamenco, and Attract. Learn more about these here.

4) Animation tutorials are now available with breakdowns of complex shots from the short, include the one below from animator Hjalti Hjalmarsson.

5) Some of the trickiest animation sequences involved the cable from character Victor’s headphones. Learn how this was overcome here.

6) Production took place primarily at studios in Amsterdam and Paris.

“I knew we had to make the constraints part of the story, that I had to come up with an idea that would make every scene different from an artistic direction point of view,” Cosmos Laundromat director Mathieu Auvray comments about the project. “But I also knew that to make such a thing pleasant to watch, we should have a strong story and something that provided continuity along the narrative.” 9) There were several major development milestones achieved during the course of production, including an Enhanced 3D View that provided cool effects like screen-space ambient occlusion and depth-of-field.

10) Blender’s GreasePencil feature was used for storyboarding the project: