For creator Michael G. Stern and supervising producer Simon J. Smith, their all-new CG series, hitting Cartoonito October 17, is a fun show that fans of all ages will enjoy, with legit new superheroes, a legit Gotham City, and a mysterious, cool Batman who isn’t dumbed down or ‘kiddified.’ 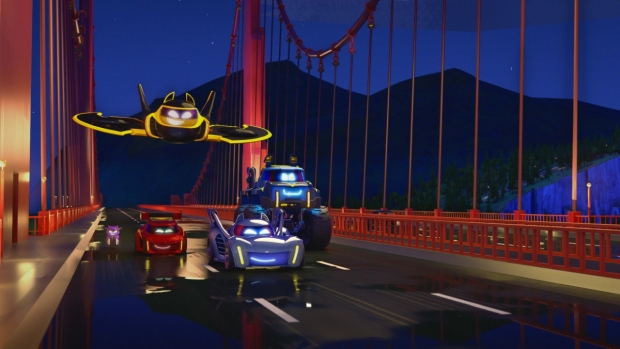 The phrase “kick-ass” is probably not one often heard associated with a preschool show. But, then again, how else does one describe a Batmobile car chase? Even if it’s geared toward four-year-olds.

Batwheels – starring award-winning actor, writer, and director Ethan Hawke as Batman – marks DC’s first-ever Batman preschool series, offering young viewers a high-speed, vibrant CGI-animated iteration of the Caped Crusader. The series features a team of super-vehicles - Bam (the Batmobile), Bibi (the Batgirl Cycle), Redbird (Robin’s racecar), Buff (the Bat-Truck), and Batwing (the Bat-plane) - as they help Batman, Batgirl, and Robin keep the streets of Gotham City safe. Whether it’s facing down the Legion of Zoom or one of Gotham City’s notorious Super-Villains, the Batwheels will use their incredible gadgets and creative teamwork to save the day.

Based on characters from DC, Batwheels is produced by Warner Bros. Animation, Bang Zoom! Entertainment, and DC Entertainment with animation by Superprod Studio. The first seven episodes will premiere on Cartoon Network’s Cartoonito Monday, October 17 and on the Cartoonito hub on HBO Max Tuesday, October 18.

“I am extremely proud of the show because we tried to attract and involve an audience as young, old, and diverse as possible so everyone can enjoy the ride,” says supervising producer Simon J. Smith. “And we managed to create a legit Batman, in a legit Gotham City, but also create a brand-new set of Batman superheroes. The action is kick-ass and it’s funny too!” Batwheels creator Michael G. Stern, who co-executive produces the series with Looney Tunes Cartoons’ Sam Register, adds, “It still feels like a fully valid Batman world that any fan would love. We just drew out and emphasized the more fun, colorful aspects that are already there and added this batch of new, fun vehicle characters – the Batwheels and the Legion of Zoom. I don’t like to approach adaptations by saying, ‘What do I have to change in order to make this work for young kids?’ I prefer to say, ‘What do I have to make sure stays true to the original, awesome IP, so that kids will fall in love with it the same way I did?’”

“The most rewarding thing for me is knowing that for a whole new generation, this will be their first Batman,” notes Stern. “It’s a huge responsibility, but I feel very proud of the version we’re presenting to them. What’s even cooler is that this will also be their first Robin, and he’s African American, and their first Batgirl, and she’s Asian American. How cool is that?”

But as rewarding as the experience has been for Stern, known for writing and producing preschool series like Doc McStuffins and Sofia the First, it came with plenty of unique challenges. Mainly, creating an entertaining, fun kids' series out of one of pop culture’s darkest superhero stories.

“Obviously, we don’t deal with the trauma in Batman’s past or tell the psychotic origin stories of the villains to a preschool audience,” says Stern, whose show does feature villains Penguin, The Riddler, Harley Quinn, and others. “But we don’t deny the existence of these things either. If you want to believe that The Joker was dropped in a vat of acid and went insane, our show doesn’t contradict that. We just don’t tell that origin story. And Batman is who he is on our show. What made him into that masked vigilante, we don’t get into. But if you want to believe the death of his parents did that, we don’t contradict that idea.” For Stern, it was important to “keep Batman Batman,” the same mysterious, cool character most DC fans all know and love and not dumb him down or “kiddify” him for the show’s audience.

“I believe this audience is underestimated,” says Stern. “They had never been allowed to see Batman the way grownups do. But why not? I want to allow preschoolers to have the same experience we all get to have when we watch a superhero movie or series. They deserve to have the same fun! Once I decided to do that, I needed other characters that young kids could relate to, which is where the vehicles came in. They would be the ‘kid’ characters our young audience would see the stories through.”

In the show, having just been created by the Batcomputer (SungWon Cho), heroes Bam (Jacob Bertrand), Bibi (Madigan Kacmar), Redbird (Jordan Reed), Buff (Noah Bentley) and Batwing (Lilimar, or Lili Mar) are essentially kids with little to no life experience, which means the characters are learning right alongside Batwheels’ preschool audience.

“This is the first TV show that I’ve worked on and I really wanted Batwheels to feel like a Batman movie when you are watching it,” says Smith, known for directing Penguins of Madagascar and Bee Movie. “I wanted to bring as much of a cinematic nature to Batwheels, without being too intense, so the whole family can enjoy it. As soon as I read the first four scripts, I recognized what Michael was doing. Not trying to change Batman or Gotham City, just not highlighting anything that would be inappropriate for our young audience. I really appreciated that.” The team’s approach to the animation also played a vital role in ensuring the show would entertain, and not terrify, its audience. It would be easy to slip into making the color pallet a bit too dark, the character designs a bit too gritty – but the Batwheels crew took an interesting turn with the designs, making them bubbly, almost like a Super Mario game.

“We knew this show was for an audience of four-year-olds and up and that the entire show would be set at night, which is pretty rare for this audience,” admits Smith. “So, we wanted to make sure everyone would gravitate to the screen if they saw an image of the show and a word we kept coming back to was ‘fun.’ It may sound cliche, but it really worked for every aspect of the show. If it didn’t feel ‘fun,’ it shouldn’t be in the show. For the colorscript, we tried to find a reference for a place where families go at night and have lots of fun: a theme park! So that’s how we came up with the colorful palette of the show. We lit Gotham City like it was a theme park.”

He adds, “For the animation of the action scenes, I came up with a shorthand recipe: Fast & Furious: + Batman = Batwheels.” And, of course, these hero vehicles also go hood to hood with villain vehicles, including helicopters. So, the next challenge was making these cars look like legitimate members of the DC universe, fierce defenders of Gotham, but also friendly and approachable for kids.

“Those were the biggest challenges because, in our Batwheels universe, it’s really two shows in one,” says Smith. “It’s not only a human superhero show with the Batfamily and traditional Batman villains, but also an animated vehicle superhero show and all the vehicle villains. And Batman and co get into the Batmobile or Batwing, or Robin’s Redbird car and use them as legit kick-ass vehicles.”

Smith says the team wanted the “visceral impact of the CG but not the intense, realistic VFX that could scare the little ones.”

“Our animation supervisor came up with a test,” explains Smith. “He animated the eyes and mouth of Bam on 2’s, but rendered the CG car on 1’s. It was a resounding success, because you get a familiar 2D animated feel to the character but still retain the high-impact CG properties to the vehicle. We did the same thing as any big VFX in the show and leaned into the 2D feel for surfacing of the world and characters. All the water, fire, explosions, smoke, are 2D animated. And, in the surfacing, there are painted highlights on objects as well as light hitting the objects. So, throughout the show there’s a lot of 2D/3D integration.” With both Smith and Stern harboring a “mega-geek level love” for Batman and the DC universe, the two are hoping and praying they’ve done all they can to bridge the gab between the preschool and older kids’ worlds.

“I would like audiences to not think of Batwheels as, ‘that preschool show with Batman.’ I want them to think of it as, ‘that cool Batmobile show.’ Then I’ll know we have succeeded. And somewhere in there, behind all the awesome action and fun, if young kids learn a little something about how to navigate the issues they face, how to get along in the world, then that’s the cherry on top.”