‘Phineas and Ferb the Movie: Candace Against the Universe’ sees the stepbrothers cross the galaxy to rescue their sister; film premieres August 28 on Disney+. 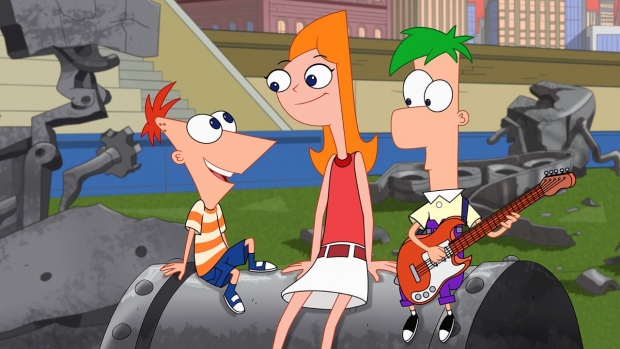 From Disney Television Animation, the all-new animated feature, Phineas and Ferb The Movie: Candace Against the Universe, debuts tomorrow, August 28, on Disney+; executive-produced by Dan Povenmire and Jeff "Swampy" Marsh (creators and executive producers of the long-running Emmy Award-winning Phineas and Ferb series), the animated adventure centers on step-brothers Phineas and Ferb as they set out across the galaxy to rescue their older sister Candace, who after being abducted by aliens, finds utopia in a far-off planet, free of pesky little brothers.

Take a look at the revealing set of clips shared with AWN:

The original series, which launched in 2007, came about, Povenmire jokes, because "Swampy and I were working together and didn't want to stop working together." Marsh laughs, noting, "We thought if we created a show together, we could continue working together." The pair sat across from each other at The Simpsons (where they worked as layout artists in the mid-'90s), before ending up as a writing team on Rocko's Modern Life. Creating a series together certainly guaranteed they'd get to stick around the same office, at least for a little while longer. Who would have guessed their creation would keep them busy all these years.

All kidding aside, Povenmire shares that turning the series into a movie was no simple task. “The series is such a short form show - they're all 11 minutes, so each one has this little structure of a story, just enough to hang a bunch of gags on,” he says. “Whereas, for a movie, you want a much stronger story with a beginning, a middle, and an end, with high points and low points, and that took a lot more working out ahead of time.”

"The series always had each story starting with whatever Phineas and Ferb did, so it was always motivated by fun,” he continues. “We wanted to do a story that was different, so we thought, 'Let's put one of the character's in jeopardy and people have to go rescue them.' And so that's why we ended up going with Candace getting kidnapped by aliens and the boys having to go rescue her on another planet.”

“In a movie, you have the time to develop stronger, more emotional stories,” Marsh adds. Like so many shows AWN has written about these last six months, the production took a hit because of the COVID-19 pandemic. “We were halfway through editing when California shut down, due to COVID-19, and we needed to figure out how to do everything from home, including a voice and music records," Povenmire says.

All told, the film took two and half years to make, with an LA crew of between 50-60 people. Each of the overseas production studios involved has several hundred people working on the project.

"On the up side, Dan and I got to write the first song that we ever wrote together via a Facetime call," Marsh reveals, with Povenmire firing back, “It was the first time we weren't in the same room with each other writing a song.”

With regards to what the series’ huge fan base can expect, Povenmire says, “Anybody who's a big fan of the show is going to get more out of the movie than if they've never seen it because there's lots of little allusions and Easter eggs and references to the series. But it's also just a bigger, more impactful story than they usually get with the same characters that they love."