For director Hiroyuki Imaishi and character designer Yoh Yoshinari, their story about a smart boy of low social status slowly crawling to his own demise is filled with genre-common themes of humanity’s corruption sprinkled with a small glimmer of hope, strikingly presented with a past-meets-present animation and narrative style; the 10-episode series is now streaming on Netflix. 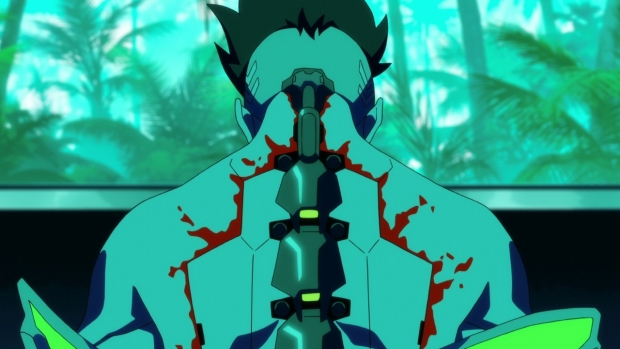 The rain-soaked streets, the thick smog glowing from the neon lights, the too-rich-to-care skyscrapers built for the elite right next to the dumpster fire-lit slums. It’s a world of drugs, tech, and sex and one most cinephiles know all too well: the world of cyberpunk.

Like acclaimed stories from years past – from Blade Runner to Ghost in the Shell and Battle Angel Alita – Netflix’s just released anime series, Cyberpunk: Edgerunners, follows the genre’s common theme of humanity’s corruption, sprinkled with the smallest glimmer of hope, but with its own past-meets-present animation and story style.

“Cyberpunk, as a genre, is very old and it's a genre that's filled with despair,” says Hiroyuki Imaishi, director of the new series from Studio Trigger and Cyberpunk 2077 game developer CD Projekt RED (CDPR). “It’s become a lot less common these days to see a story with a cyberpunk genre. But, even though the genre itself is old, Edgerunners has been put together in a way that, I hope, can be more easily consumed by modern audiences.”

Cyberpunk: Edgerunners is a prequel to CDPR’s Cyberpunk 2077 game, which is part of the same dystopian science fiction universe as the Cyberpunk tabletop role-playing game franchise, written by Mike Pondsmith, and first published by R. Talsorian Games in 1988. Set one year before the events of Cyberpunk 2077, Edgerunners tells a standalone, 10-episode story about street kid David Martinez trying to survive in a technology and body modification-obsessed metropolis of the future, Night City. A private school kid from a low-income, single-parent family, David is painfully aware he doesn’t belong on the bright and shiny side of the city, nor among the wealthy students who make it their mission to remind him of his low status and proper place in Night City’s food chain.

While David is willing to stick it out through the abuse for the sake of his mother, who has given all her resources in hopes of seeing him succeed, her untimely death sees him drop out of school and join a group of cyberpunks in an effort to become an "Edgerunner" - a high-tech, black-market mercenary. Armed with military-grade chrome installed into his spine, David quickly becomes a valuable asset to his team.

But, with every organ and body part an edgerunner replaces with sleek new tech, the more they risk entering “Cyberpsychosis,” an irreversible dissociative disorder, caused by an overload of cybernetic body augmentations.

“David was such a different character from Imaishi’s general characters,” says Edgerunners’ character designer Yoh Yoshinari, who previously worked with Imaishi on shows like Gurren Lagann, Kill la Kill, and BNA. “Usually, Imaishi's characters are very hot-headed, and, in another sense, not very intelligent. David is a smart boy. And the story is about this smart boy slowly crawling down to his demise. With him being an intelligent individual, it was very hard to find a convincing reason for why David is taking these actions because, at least to me, it didn't really make sense. So, it was really difficult to make extremely troublesome situations that would push David into a corner and force him to make these choices. The situation always had to be dire.” The challenge of fleshing out David’s character and decision-making into something believable but still in line with the Cyberpunk universe was an even bigger challenge since, when CDPR came to Trigger – known for PROMARE and Kill la Kill – to pitch Edgerunners, their Cyberpunk 2077 game was still unfinished. While the world of Cyberpunk had existed for quite a long time, the main characters for the anime were pretty much nonexistent. And that was an area where Trigger was given the most creative freedom.

“It was a big struggle but that was the part that we enjoyed the most about making Cyberpunk into an anime,” says Yoshinari. “Working on an adaptation, or on anything that has an original IP, is quite rare for our studio. And it was a first-time experience, at least for myself. The only thing that was clear was that the genre for the game was cyberpunk. And that genre is very nostalgic to both my and Imaishi’s age group.”

Both Imaishi and Yoshinari were born in 1971, at the start of the cyberpunk hype and, for all of Edgerunners’ modernized story features, there are plenty of callbacks to retro anime.

The view of Earth as Lucy takes David for a romantic evening walk on the moon (in virtual reality) reflect scenes from Kazuo Yamazaki’s Please Save My Earth (1994); Lucy staring out her window at the nighttime cityscape looks an awful lot like Major Motoko Kusanagi’s window reflection scenes from Ghost in the Shell (1995); motorbikes somewhat resemble those in Katsuhiro Otomo’s Akira (1989); wide open wastelands shown in the recesses of edgerunner veteran Maine’s memories look like the deserted U.S. plains in A Wind Named Amnesia (1990, also by Kazuo Yamazaki). And the cyberpunk gang dynamic has some Cyber City Oedo 808 (1990) flavors. But perhaps the most unique throwback feature in Edgerunners is the bullet-time animation sequences, shown when David activates his Sandevistan; a piece of machinery installed into his back that will slow down time to a certain percentage, on command, for a set duration. David uses this tech at first to get the upper hand on one of the kids at school who mercilessly berates him and his mother but, eventually, the young edgerunner begins using it in his mercenary work, avoiding being shot, stealing chipware, and capturing targets.

In the anime, Trigger created sequences that show each frame of David’s movement, with varying shades of color for each frame of motion. It’s a pretty trippy visual, not only in David’s action sequences, but also in times of characters experiencing hysterical Cyberpsychosis.

“Replicating that in animation, making movement appear really slow, it's a lot of work,” says Imaishi. “So, our method was to spread out all the frames that would have gone into that particular animation, brake it down, and fill in the gaps. Normally, the previous frames in a lightning-fast sequence would just disappear from the screen and you wouldn’t have to see it. But, with Cyberpunk: Edgerunners, we took those sequences and showcased each frame with a lot of care.”

Yoshinari adds, “And this is a style that actually existed in Japanese anime from older days. So, it's nothing that’s artistically new, it's just a style that's associated with very retro anime. We dusted it off and brought it back to modern animation. I think that it worked out really well.” Old gaming graphics were also inspirations for the “deep-dive” scenes, where the characters in the Cyberpunk world surf the networks by hooking themselves up to the web through connections installed in the back of their heads – a bit like The Matrix.

“The deep dive scenes, I felt, were the hardest,” shares Imaishi. “In the game, [the network] is expressed with a lot of these digital objects or pixels. But, in anime, you can't illustrate that in the same way. We just don't have the tools to replicate it. So, we drew reference from old-school analogs. It looks very different from the original game, and it was the hardest thing for me to make look convincing.”

Imaishi, Yoshinari, and their team at Trigger have managed to create a cyberpunk story that’s a beautiful composition of crisp, modern 2D animation with nostalgic imagery for those who were raised on 70s, 80s, and 90s anime. It has all the tones of favorite dystopian anime but wrapped in a shiny new package. And yet, so much of Edgerunners’ conception is not to cater Japanese viewers’ nostalgia, but for Trigger to reach a new range of audiences.

“Today’s typical Japanese audience isn’t very attracted to this particular sci-fi genre, at least not anymore, and we felt that this might be a good opportunity for Trigger to catch a different audience,” says Yoshinari. “It was refreshing to do the character designs for Edgerunners, because I knew that most of the demographics were going to be outside of Japan. Oftentimes, when I have to design a character with a Japanese audience in mind, what the Japanese audience usually would consider cool or cute has gotten to the point where it all looks the same to me. So, it was refreshing to design something without having these restraints or concerns in mind.”

Imaishi adds, “I also made it in a way so that the folks who play the game would also be able to enjoy and further develop a love for their favorite genre. I was trying to find a balance to make the existing audience and the newer audience happy and I hope that I was able to strike a really good balance between the two.” Cyberpunk: Edgerunners is the first anime Trigger has produced based on a video game, but approaching topics of classism, sex, and brutal violence is nothing new for them – they collaborated with A-1 Pictures on the mature, science fiction monster romance, Darling in the Franxx – and was one of the reasons they’re well equipped to tell this new Cyberpunk story, outside their exquisite skills creating captivating animation.

“We knew that it was going to be streaming-exclusive and that the original game was rated mature,” says Imaishi. “So, there was a part of me that intentionally made it a little bit more unhinged. Ultimately, it boils down to the fact that we don’t want to cater too much to what society says is acceptable and what they say is ‘too much’ because it starts to hinder the creative vision.”

In Edgerunners, a sugar-coated or watered-down version of David’s story just wouldn’t hit home. As Yoshinari said, in order for David’s decisions to make sense to an audience, the situations had to be dire. And, in order to really appreciate the hope, against all odds, that netrunner Lucy embraces at the end of the series, the darkness and total despair has to be tangible, and visceral.

“The game itself was from the late 80s, which is also when the genre of cyberpunk was really still new and popular,” explains Yoshinari. “The genre really kicked off based on how Japan's economy was doing so well in the early 90s and late 80s. The genre of cyberpunk was a reference to the question of, ‘What if Japan kept on growing like this? Would it become a very consumerist, technology-driven world?’ It’s been like a good 30 years since the initial inception of the cyberpunk genre. And, today, the future is a little different than what those in the 90s thought it would be like.”

He continues, “But it's still a very economist-driven society, and there are a lot of folks who struggle to live. And it’s probably not getting any better, either. So, what I would want the audience to gain from Edgerunners is that there are people who struggle to live in a really crappy society. And I hope that provides some insight and sympathy.”