Directors Conrad Vernon and Greg Tiernan return to helm MGM’s CG animated sequel that sees the famously mysterious and spooky family set out on a miserable road trip across the U.S. in an attempt to reclaim its oddly special bond, released today in theaters and via PVOD. 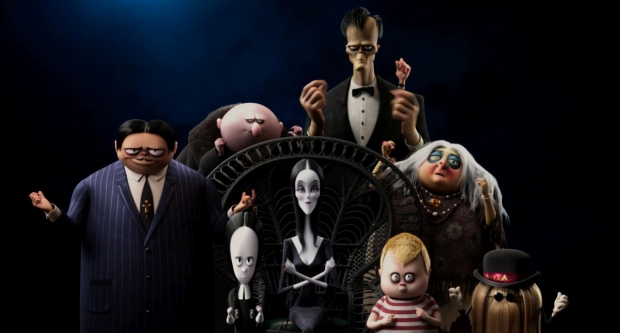 Take the notoriously spooky, and uniquely odd Addams Family matriarch and patriarch, Morticia and Gomez, distraught that their children are growing up, skipping family dinners, and totally consumed with “scream time,” have them cram Wednesday, Pugsley, Uncle Fester, and the crew into their rather uniquely bizarre camper, and hit the road to recapture their bizarre family bond on one last miserable vacation. Send them across America; include several run-ins with iconic cousin It. What could possibly go wrong?

The humor, and timeless relatability of the “Addams Family” franchise lies in its inversion of the ideal American family: an eccentric, wealthy clan that delights in the macabre and is unaware that people find it bizarre or frightening. Originally published as 150 individual single panel cartoons by Charles Addams between 1938 and his death in 1988, Addams’ work has been adapted into a well-known TV series, live-action films, a Broadway musical, and the 2019 animated feature, The Addams Family. Netflix and Tim Burton currently have a live-action series, Wednesday, in production; it’s a “sleuthing, supernaturally infused mystery charting Wednesday Addams’ years as a student at Nevermore Academy.” OK. The sequel, as far as sequels go, was announced unusually fast. Regarding MGM’s quick decision to greenlight the next movie, Vernon says they probably couldn’t have hit a 2021 release date if they hadn’t moved forward immediately after the first film’s completion. “The studio thought the first film was such a hit that they announced the sequel four days after it released in theaters,” he shares. “So, we always knew we were going to do a sequel pretty much since the first one came out. We started thinking about it immediately, especially since they wanted to come out in October 2021. And that was October of 2019. So, we had two years to make a film from scratch. I mean, that's pretty much the only way we got this done in time was that we had all the assets at the studio. We had the team still at the studio and we basically could just hit the ground running. Cinesite [where the film was produced] was ready to go. They were just saying, ‘Where's the script?’ And I was like, ‘Well, that's the hard part.’”

Every director will tell you nailing the story is the hardest part of any production. Vernon is no different, especially on this film, which he claims “was even more daunting” than usual. “The hard part is getting the story to track, to read well, and be as good as it possibly can be,” he explains. “Whenever you're making one of these movies, you're kind of building the car as you're driving it. But on this film, it was literally chasing the car, and as you caught up with it, putting a piece on, and then it would pull away from you. This time around, between creative being given the time to come up with what they needed and churning it through the machine as fast as possible, we had to walk a tight rope.”

Asked how long it took to develop the story to a point he felt comfortable they had their film pretty set, he answers, “Well, there was never a comfort zone on this one. It was a constant drilling forward because we had to hit a Halloween 2021 release date and we were starting from zero. Our writers, to their credit, got in a room, spent a week together, and banged out that story.” [Potential spoiler ahead] “At the beginning, I was a little leery about the whole idea of Wednesday not being an Addams,” he reveals. “I felt, ‘Who's going to buy that she's not an Addams? You take one look at her and you know she's part of that family!’ But they had it in their mind what they wanted to do with it, and they pulled it off brilliantly.”

“I found out, it doesn't matter whether or not people buy it,” he continues. “What matters is that she buys that she might not be part of the family. It’s how this affects Morticia and Gomez. That's the drama. That’s the conflict. So, I got schooled on that, and I'm glad, because you always learn something.”

Vernon wasn’t originally planning to direct the sequel, but is glad he “signed back on, because unlike the first film, I was able to kind of dig deeper into these characters and come up with new ideas for them.” Noting that the first film re-introduced the family to a new generation of moviegoers, he says “we did a lot of stuff that just tread the same ground as past iterations of the Addams family, so that everyone got to know them.”

“In the sequel,” he adds, “we could find out what would happen if when they went out on the road, hit different places, and dealt with different aspects of what happens in the family.” The challenge of directing a sequel is making sure you capture what audiences enjoyed in the previous film while taking them somewhere they haven’t been before. “With a sequel, first off, you have to be unique, which is the whole thing about the Addams family. That surprise is what interests people. You need to surprise people. Every time I make a movie, I asked myself, ‘What are bringing to this that no one else can?’”

According to the director, you also have to make a sequel you can watch on its own without linking it to the first movie. “You can watch Shrek 2 by itself,” he says. “You can watch Madagascar 3 by itself, and you don't have to know what happened to these characters in the past to enjoy the movie. And it's the same thing with The Addams Family 2. You don't have to know what happened in the first film to enjoy this new film. So, it's about making sure you have a tight story with a good beginning, middle, and end unto itself, and then taking the characters you've created and going deep with them into that story.”

“When you do this for 25 years, like I have, you start a film knowing what the process will be,” he concludes. “The exciting part, the fun part, is coming up with that story, storyboarding it, writing it, and working with the animators. All that creativity, it’s great. And it’s different every time. And this time, it came out really well!”

Taking an Old-School VFX Approach in ‘All Quiet on the Western Front’
‘Natural Habitat Shorts’: Like ‘Ranger Rick,’ But for Adults
Framestore Sets Sail on ‘1899’ with New Virtual Production Tools
Animated Characters: The Art of Babbitt – Part 1
Bruce Smith and Ralph Farquhar Talk ‘The Proud Family: Louder and Prouder’ Season 2
VFX is the ‘Thing’ for Tom Turnbull on Tim Burton’s ‘Wednesday’
We Need to Chat
F is for Flake: The (Not So) Great Animation Robbery?
END_OF_DOCUMENT_TOKEN_TO_BE_REPLACED