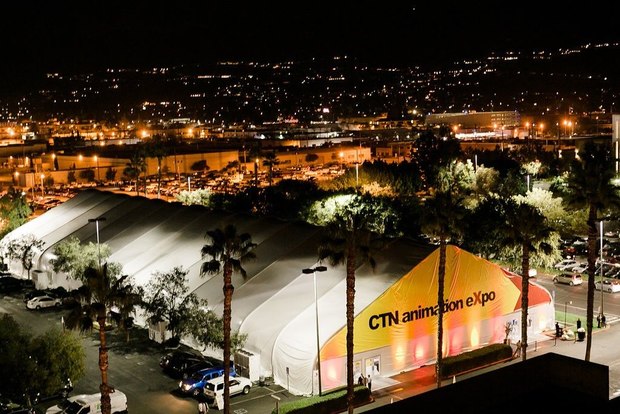 The CTN animation eXpo, or CTNx, returns to Burbank next week, November 15-18, sporting a program packed with talks, workshops, presentations, demos and recruitment sessions, covering just about anything and everything animation-related. The brainchild of industry veteran and Creative Talent Network founder Tina Price, CTNx brings together professionals, educators, students and fans, all rubbing elbows and sketch pads at the Burbank Marriott and adjacent Convention Center. This year also marks CTNx’s 10th annual event, a worthy anniversary considering its humble origins and early skepticism about its viability.

For Price, CTN grew out of a need to stay connected with colleagues after leaving Disney in 2006. “I was at Walt Disney Animation for 23 years,” she explains. “When I was asked to leave during a rather large downsizing, I realized that artists outside of Disney did not have what I was so generously provided inside the studio…such a huge family of talent, where I had the ability to walk into anyone’s office at any time and get feedback. I started CTN to one, stay connected with my peers who I worked with at Disney, and two, to help promote the special work this group of artists does. In those days, no one knew who we were. They knew Robin Williams as the voice of the Genie, for example, but they didn’t know Eric Goldberg and his team of artists behind the scenes making that animation magic happen by bringing it to life. So, I used the inheritance my mother left me when she passed in 2003 and started CTN. It wasn’t necessarily just for the artists in LA, but for artists around the world.”

With CTN launched, she began moving forward on a stated agenda to provide both communication and networking opportunities for the animation community. Price set her sights on hosting an annual event, an “expo” of sorts, to support CTN’s growth and the overall industry as well to provide a bigger communal space where artists could gather to promote themselves, their work and their creative ideas.

Price met with AWN’s Ron Diamond and Dan Sarto, among others, to share her ideas and get feedback, assessing the viability and need for such a gathering. In that meeting, and subsequent discussions about particulars, though the three recognized the considerable hurdles and significant logistic and financial challenges Price would face creating such an event, they nonetheless acknowledged that CTNx could fill a huge void and easily become a vital resource for the community. According to Price, “I am the type of person who has too many ideas and I want to do everything and more. The biggest challenge is not having enough time and money to do everything you want to do and do it the way you want to do it.  The learning curve for an entrepreneur is always steep. I remember coming to AWN first and letting them know that I wanted to host this event and needed their input. Both Dan and Ron were very supportive and let me come back time and again with my newbie questions.” The event was born soon thereafter, opening its doors for the first time November 20, 2009. “The vision and the concept of the event hasn’t changed from the original idea I had back in 2008,” Price notes. “I was warned early on by my skeptical lawyer that I had made a terrible mistake and that no one was going to come to this event and no one would stay in the hotel. He stressed that it was just a ‘local event’ and people are exposed to this everyday here in Los Angeles. But in 2009, we opened our doors to 2,800 people. 4.5% of them came from out of the country, and 45% were from outside the Burbank / Glendale Area. Now, we fill 12 hotels each year. So, apparently, some people are getting in their cars and hopping on airplanes to come.”

So, what’s the draw? What does CTNx offer the industry that makes thousands of people jump in their cars or hop onto planes to attend? “As creative people, we always want to ‘stay current’ and ‘in demand’ and not get stale,” Price describes. “Artists are different. The world is their inspiration and they get inspired at the least expected moments. You never know when that idea will come to you, or from where. They are hired and put to work by companies, to be creative, on demand, day after day, month after month, year after year, without getting bored. How do they do it? Well, like a child, they look at every project, every new design, every new story, as a whole new world. It is vitally important that as a community, we hand down that worldview, from generation to generation, that we cross pollinate, play and connect. This is what makes us the greatest creators of the narrative artform of animation in the world.”

“People may not have noticed, but there is a renaissance going on right now in animation,” she adds. “Artists are at the heartbeat of a multi-billion-dollar industry and moving to Los Angeles and Burbank in droves. To that end, CTN always includes artists and filmmakers in all aspects of the animation community and from all mediums. They are ‘in demand’ and CTN is their champion. It is an amazing time.”

This year, CTNx promises an even bigger gathering than in years past, with an aggressive and extensive program of activities, all designed to connect animation artists, studio executives, producers and community leaders. New this year is an even bigger focus on immersive content creation. “This year we are celebrating our 10th annual event and are proud to include a VR Immersive Storytelling Studio with artists, studios and filmmakers working and exploring that medium,” Price says. “After nine events now, we always try to create a new kind of magical oasis in Burbank with a new theme each year. This year, our theme is ‘Creating Experiences that Last a Lifetime.’ Times change but people don`t. Creators today are the same as they were in the Renaissance Era -- they embody those three Cs: curiosity, confidence and courage. We are just provided with different tools.”

Ultimately, while much of her focus is on the November event, Price emphasizes that CTN is much more than just an annual Burbank gathering. Much more. “CTN is more than an event,” she shares. “You realize that after you leave. It’s a refueling stop. A time to say, 'Yeah, I'm going through that too!’ All year, we hold gatherings, portfolio reviews, boot camps and networking events. We started a Teen CTN last summer with our first Animation and Design Summer Camp for kids 12-17 years old. They got to work with different industry veterans. It was magical watching their faces light up, seeing how they improved in such a short time because they were working with professionals and being treated as professionals. It was fantastic being able to meet with families that have so many questions like, ‘My son draws all the time. How can we best support him?’ Or, ‘What options do we have for our daughter who is only 12 but wants to work in animation?’ CTN is truly for everyone with a passion for animation.”