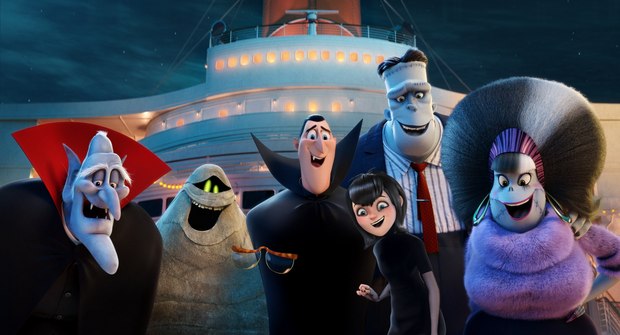 In 2011, after many years stalled in various stages of development, acclaimed director Genndy Tartakovsky -- the sixth director attached to the film -- took over a troubled Hotel Transylvania production. The following year, the film took everyone by surprise when it generated $358 million at the global box office against a reported budget of $85 million. 2015’s Hotel Transylvania 2, also directed by Tartakovsky, faired even better, grossing $473 million worldwide against an $80 million budget.

However, despite the box office success, after Hotel Transylvania 2 Tartakovsky proclaimed he was done with the franchise. In fact, subsequent work with Cartoon Network writing and directing Season 5 of his award-winning, immensely popular hit animated series, Samurai Jack, made him even more determined to work solely on his own material moving forward. Twelve years after the series finished its original run in 2004, Tartakovsky wrote and directed 10 new episodes, which proved hugely successful when they aired in 2017.

“The Samurai Jack experience was so rewarding, process-wise and creatively, because I could literally do whatever I wanted -- it was more adult, so it could be more sophisticated and not so black and white,” he notes. “The ratings were amazing, and the response was so great, that I realized, ‘Yeah, I’ve gotta just do my own stuff.’ That’s really where my bread and butter is. That’s how I’ve been successful in my career…from my original stuff.” Inundated with requests to direct other creators’ work, Tartakovsky said no, until the conditions for taking on Hotel Transylvania 3 changed to his liking, which included Sony Pictures Animation’s support for his original story idea. “When I look for work, what I get is IP, right?” he notes. “Something existing. ‘Can you do a take on this? Can you do a take on that?’ And even though, sometimes, it’s exciting, like the Popeye project, that I loved, and had a strong vision for, now I say ‘No’ to everything. I’m only gonna give birth to new children, and hopefully, they’ll find life somewhere. But honestly, for this film, it was that idea of the cruise that made me reconsider. I actually went on a big family cruise, and ideas started talking to me. I started thinking, ‘Oh yeah, that feels really good. It feels very natural to put them in this setting.’ And I’ve always wanted to do a Dracula falling in love story, because it felt like it was time for him to have a different arc. After doing Samurai Jack, it felt like a good fit,” he says.

“Initially, SPA had an idea they were developing, where it was a big international heist, with some younger characters,” he adds. “And it really felt like a jump the shark type situation. So, when they started talking about me directing, I said, ‘No.’ The core of the franchise, to me, is they’re a monster family, so everything should be family-centric. And this whole idea that they were superheroes, or spies, something like that, just didn’t feel right. So, I told Kristine [Belson, president of Sony Pictures Animation] the idea for the cruise, and she kind of fell in love with it.” Though Belson liked his story idea, Tartakovsky was still looking for the creative control he felt he deserved, and needed, to make the third film. He explains, “While Adam [Sandler, the voice of Count Dracula and a creative force on the first two films] is still the voice of Drac, he wasn’t involved as much creatively [on this film]. I’ll be honest. As a director, I want all the control. You know? I want all the control, I want to make all the decisions. Because at the end of the day, I’m responsible. I’ve done my own stuff for 20 years and was always in control of my destiny and the project’s quality, so I was always able to stand in front of everything that I’ve done very confidently. Because the movies bring so much pressure, and cost so much money, sometimes, the more [creative] opinions, the more it guarantees [to executives] that it would be better. You get the sign off from multiple people. Adam is amazing, very talented, and really funny. But, it’s frustrating where sometimes, I don’t get to do the gag that I wanna do, and sometimes, other people’s sensibility is slightly different than mine. It’s like any marriage, or collaboration -- creatively, there are ups and downs. And because I’m such a bitch, it’s difficult for me to let go. So, SPA setup a situation that was very favorable to me, and I decided, ‘I’ve got a really good story idea, the situation is different, so I’ll do it.’”

Creative control ultimately meant Tartakovsky assumed the writing chores, something he didn’t do on the first two films. “I wrote the script with Michael McCullers, and when we wrote it, we wrote it to spotlight the animation. So, all the gags are more physical. There’s a different feeling to the film. The setup on this movie was a bit different than the first two. Because Adam’s busy, he’s not involved [like on the first two]. And so, I was able to control things, more so, and make the film much more from an animator’s perspective.”

Writing as well as directing actually made Tartakovsky’s job easier. No less stressful, but simpler, as he was able to lock in the main story early and stick with it for the entire production. He explains, “Well, for sure, pressure is always there. But, there’s a very specific style to my storytelling, and because I was able to set it up early [the story], and get it signed off on, things were easier. We had the basic structure of the movie early. Then, we just changed some locations, always playing with pacing, playing with sequences…which could be the funniest, and the most impactful? That’s the normal, organic process of figuring out a story. But generally, the film is exactly the same as what we had at the start. That makes it a lot easier than putting up a whole animatic, and going, “Right, this isn’t the movie we wanna make, let’s start over.” Having directed the monster ensemble twice before, Tartakovsky got to know his characters, their audience appeal and how best to integrate them into the new story. “After two films, we’ve gotten a good feeling and understanding of what works. You know, what the core dynamics are for each of the characters. And so, for this film, we were able to get ‘em out of the hotel, get ‘em on a big adventure, and be more precise with all our gags and gag sequences. Like, here’s the beginning and end of a sequence, and there’s 30 gags in between. It’s really a much different structure,” he notes.

Of great importance to the director is that Hotel Transylvania 3 provides a chance to focus his attention, and production resources, on a more physical, cartoony style of animation. According to Tartakovsky, “We have a lot of animators, many whom worked on the first two films, which was very helpful. That all relates back to having material where we could really showcase the animation. By having more scenes that are physical gag driven, and more visual, you have a chance for the animation to shine. Like, rather than sitting in the car, talking, or sitting at a table, eating, there’s a dancing sequence, or a swimming sequence. It makes it a whole different experience.”

Enlisting one of the director’s long-time collaborators helped enable the new creative dynamic and meant the animation could be pushed more than ever. According to Tartakovsky, “I was able to bring on Scott Wills as the production designer. Scott has done everything with me, from Samurai Jack, to Clone Wars, to Sym-Bionic Titan…we did everything together. With him, I knew we could push the look, we could push the color, we could push everything, and have this be a really cool next chapter of Hotel Transylvania.” For Tartakovsky, Hotel Transylvania 3 is the broad animated comedy so many big animation studios have moved away from making in their quest for more “family friendly” entertainment. He explains, “I always talk about tone in animation. In live-action comedy, you can have a movie like When Harry Met Sally. You can have a comedy like Airplane. And then, you can have a movie like Dumb and Dumber. Those are all very different comedies, all equally good. But, for some reason, in animation, you have to have this formulaic comedy. Most likely because of the success of all the Disney and Pixar films, you’re a little boxed in by, ‘A family animated movie needs to have A, B, C and D.’ But we have a much broader comedy. It’s sillier. It’s more lighthearted. We don’t take ourselves too seriously. You’re not gonna cry, it’s not gonna be all super emotional and dramatic. If you can get like five to ten amazing laughs, and you’re watching a sequence and smiling, then it’s fun, and it’s money well spent. At the end of the day, in this world we live in, with so many tough situations worldwide right now, sometimes, some silly laughter is good. Sometimes, you need a little Three Stooges to balance all the drama and heartache in life. We’re doing something very broad, and silly, and goofy, and unrealistic, while most of the other places are doing things that are much more grounded in reality. They’re trying to get a very true, emotional core, which is great. But like I was saying, everything can exist together. Not everything has to be the same. For me, the laugh is more important. And for some of the other places, the emotion is more important.”

Ultimately, Tartakovsky acknowledges that SPA’a trust in his creative decision-making means the film’s success, or lack thereof, rests firmly on his shoulders. “There’s a lot more pressure on this one, because I am responsible for writing it with Michael,” he concedes. “So, if it fails, I can confidently say it’s my fault. But at the same time, if it succeeds, then I can confidently say, all the decisions were correct! This movie is gonna surprise you…the scope, and what I call ‘the comedic spectacle.’ We have this big comedic action sequence at the very end -- the scale and execution…it’s enormous. It’s epic! When you see it, it’ll be like, ‘What is this?’ in a really good way! Yes, it was a challenge do a third film, to make it feel fresh and new, but at the same time, retain the core and everything that was successful about the first two. But, I’m super excited, and very happy, about this film.” An edited version of this article originally appeared in the Special Annecy 2018 Edition of ANIMATIONWorld Magazine.