A Crossover Episode: Pictures from the Brainbox meets Keep it in Motion

It's a crossover episode day about the joys of immortality. Pictures from The Brainbox serves up Dans la joie et la bonne humeur to with Keep it in Motion's serving of the 1994 rarity, Jaagup and Death. 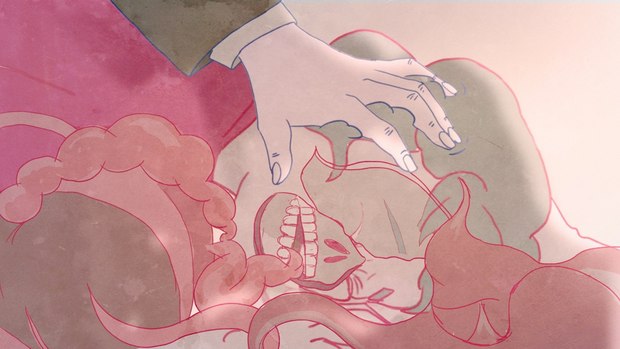 Our greatest fear, I’d venture to guess, is dying (as opposed to death, which won’t bother you cause you’ll be no more).  We sweat, strain, worry, fret, drink, smoke, study, meditate and generally do whatever we can to put off the unavoidable.

Ah if only we could be immortal. That would solve all our woes…. or would it?

We think we’d love to live forever, but I’m not so sure – nor are the directors of today’s featured short films - we’ve really thought it through.

While re-watching Jeanne Boukraa’s 2014 student film, Dans la Joie et la bonne humeur (With Joy and Merriness), I thought of an older Estonian film, Jaggup and Death (Heiki Ernits, 1994) that dealt with the same subject (albeit with a different tone). Both films consider a world where immortality has been achieved.

In Ernit’s film, one man repeatedly cheats death only to find that immortality gets a bit tedious, lonely and, well, unbearable - when you’re the only one who has it. Pretty soon, he’s begging death to take him away.

Boukraa’s more experimental (and nihilistic) take, on the other hand, shows us a world where immortality would just make people worse. Would we become even more cruel? You know those days when rage overtakes you and you just want to strangle the life out of something, someone, but don’t, cause well, there are lots of reasons (death, jail, grief, regret). Well, in this immortal world you can do whatever the fuck you want with no consequences. Want to murder your spouse? Go ahead, she’ll be fine. Want to run over someone with a car? Not a problem, they’ll get up. Oh and which of us exists? Is it the child, teen, adult or elderly version? What if they all co-exist together so that your elderly self is roaming around with younger versions?

It’s enough to leave you exasperated, exhausted, and craving the welcome relief of non-existence.

SCAD Alumni Talk Animation Skills, Careers, and Opportunities
Digital Domain Pushes the Limits of Monstrous VFX in ‘Morbius’
An Interview with Priit Pärn
‘Baymax!’ Provides an Rx for Humor and Compassion
How Digital Domain Brought Photoreal Characters to Life in ‘The Quarry’
Mission Critical: ‘Lightyear’s Journey to Infinity and Beyond
‘The Freak Brothers’: This is Your Humor on Drugs
END_OF_DOCUMENT_TOKEN_TO_BE_REPLACED