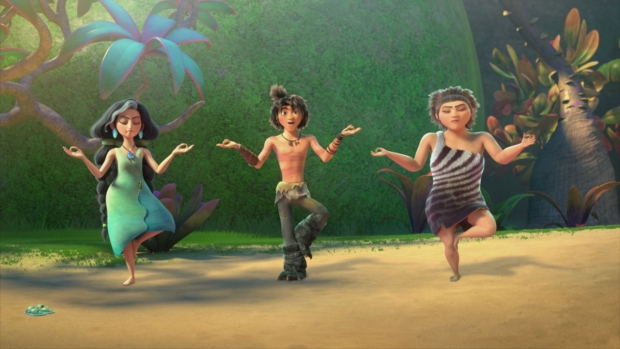 It was only a matter of time before the prehistoric tiger riding, bird hunting, and sleep piling family joined DreamWorks Animation’s pantheon of feature film franchise TV series adaptations.

After two years in production, The Croods: Family Tree premiered last week on Peacock and Hulu. The series is set after the events of the recent animated The Croods sequel, The Croods: A New Age, where the Croods family meets and moves in with The Bettermans, a brains-over-brawns family that has spent many years creating their own sanctuary and are less than pleased with having to share their space with such restless, high-energy neighbors.

“That’s such a perfect set-up for a series,” says writer and executive producer Mark Banker, well-known as a writer on Adventure Time and The Epic Tales of Captain Underpants. “It would have been tragic not to do one.”

While the film concludes with the Croods and the Bettermans making peace as the families become permanent cohabitators, there are still plenty of domestic ups and downs that form the foundation of the new series, from dangerous bounce berry harvesting to dramatic, and passive aggressive, dinner preparations. And let’s not forget the further development of Eep’s first best girl friendship with the sheltered but enthusiastic Dawn, as well as the eldest Crood daughter’s ever evolving romance with brainiac stud Guy. The project has actually been in the works since before sequel released.

“In late 2019, DreamWorks chief creative officer Peter Gal called me to ask if I might be interested in working on a new Croods CG series with Todd Grimes, one of my beloved collaborators from The Epic Tales of Captain Underpants,” remembers Banker. “I most certainly was. The second movie was in production, and we were able to screen a rough assembly. It was a combination of early animation and animatic footage, and it was already a fun ride with big laughs, cool action, and real heart. So, the next week, I pitched ideas for how a series might proceed. A month later, I was in an office on the beautiful DreamWorks campus writing the pilot script.”

It’s far from unusual for DreamWorks to create TV series from their successful films. How to Train Your Dragon, Trolls, Kung Fu Panda, Madagascar among others have all been adapted into animated series that further explore the diverse and intricate worlds of their movie counterparts.

“Episodic television gives us the opportunity to tell more stories about the characters, and expand the worlds even further, giving the audience more to enjoy,” explains co-executive producer Grimes. “It’s evident form the success of the films that audiences really love these characters and want to know more about them. In the case of the Croods and the Bettermans, we have nine principal characters - 10 if you include Sandy - and that opened the door for so many fun opportunities to tell more personal stories about each of them. And of course, we got to make more hybrid animals to inhabit this Croodaceous world.” Banker adds, “A cultural clash between the primitive and the more evolved. The divide between early civilization and the untamed wild. The odd couple premise is a deep well for stories and exploring all that takes time. And a series can tackle more stories with greater speed than a film.”

The Croods: Family Tree is not only filled with fantastical fun and relatable relationships but also more of the big, beautiful and bold animation from the second film. It’s a world where color is king and soft, rounded characters rule.

While many DreamWorks shows deviate from the original feature animation style, such as Trolls: The Beat Goes On! taking on a very different 2D look from the original 3DCG film, The Croods: Family Tree gives viewers the sensation that they’re right back in the theater, watching extended scenes of the movie.

“We really wanted to create an animation style that lived up to the look of The Croods: A New Age,” says Grimes. “Since our show takes place right where that film left off, we wanted the visual style and tone to feel like a seamless transition. There are different budgetary considerations when you produce animation for television, so we often needed to come up with creative solutions that worked within our parameters. I think our team has done a great job in emulating the quality of a feature film on a television series schedule.” Being “careful and clever with resources,” as Banker puts it, was what helped the team overcome the additional challenges that come with creating the world of a TV series extended off an already known and beloved story. And while television works at great speeds, that speed also means limited time.

“It’s no secret that a series produces more material in a smaller timeframe than a film, and right as we were starting production, a pandemic hit and shut down human civilization,” notes Banker. So, like everyone else, we had to reinvent the wheel and figure out how to work from home. All the writing, designing, directing, acting, recording, editing, mixing and so on were done remotely, usually by people in their pajamas.”

He continues, “The movies did an excellent job of building the world and establishing distinct personalities for all the characters, so the foundation for the series was rock solid. But, the challenge was honoring the work already done and making the series feel like a worthy continuation of the Croods/Betterman saga. Luckily, our crew is an all-star team that never fails to deliver.” And after two years of tedious work and fenagling, Grimes says the team is “all very happy with the world we’ve created.”

“We’re all very excited to finally reveal what we’ve been secretly working on for the past two years,” says Grimes. “We knew the show would be a challenge, but we came together as a team and figured out how to make it possible. The final product is funny, heartwarming and absolutely beautiful.”

Banker agrees, saying they “couldn’t be prouder” of the work, so much so that it’s impossible for him to choose a favorite episode.

“Picking a favorite episode is like picking a favorite child,” he shares. “If you have one, you keep it to yourself because they’re all wonderful in their own ways. Guy’s rocky journey of self-discovery in “Guy Time” is a delight. Watching Eep and Dawn’s friendship ascend to a new level in “What Goes Eep Must Come Dawn” is inspiring. Seeing the Croods seek their purpose on the farm in “Sticky Business” is gripping. “Game Nightmare” is a front row seat to an epic Grug vs. Phil bout. “Parental Stridence” tackles clashing approaches to parenting in hilarious fashion. And “The Flopping of the Bullruses” is a thrill ride with a rewarding twist. That’s all of them. So, looks like they’re all favorites. Best to watch them all.”

But on top of expanding yet another DreamWorks family-focused franchise into the TV world, Banker and Grimes hopes The Croods: Family Tree can offer audiences - who have all spent a lot of family time inside because of the pandemic - their own “Betterman” sanctuary of hilarious relatability and much-needed cheer. “I hope that our show can provide some comfort during a time of uncertainty - especially for the younger audience,” says Grimes. “Mark and I both felt like this was the type of show we needed right now. So, we made one!”

Banker adds, “Animation takes time. So, we’ve had a while to get excited about this premiere. And now that it’s finally here, it feels glorious. It’s a show about families for families that families can watch as a family. The audience will get to know the Croods, Bettermans and Guy as well as they know their own families. We hope viewers will laugh, scream, pump their fists, shed a tear or two and maybe feel like life is just a little bit better for having watched the show.”

Regarding a Season 2, Banker says nothing has been confirmed yet but that, “all you have to do is believe.” “That’s how it works, right?” he says. “No one knows what the future holds. Except maybe Phil Betterman.”