Jack Cusumano and Teri Hendrich’s ‘Color is Design’ social media campaign is a key part of their ongoing effort to get color designers paid the same as other jobs in animation design. 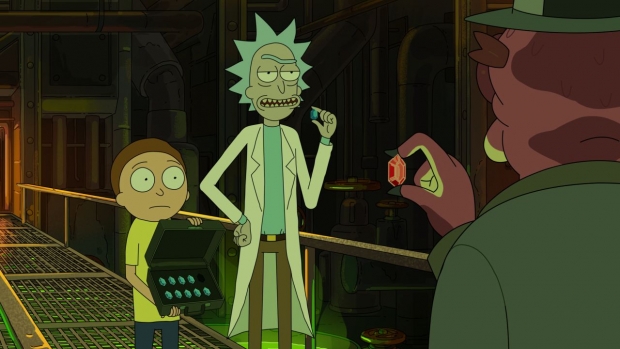 Golden planetary explosions, lime green laser beams, hot pink electrocutions, and infinite amounts of purple, green, blue and every other color of alien organ remnants, Rick and Morty has no shortage of disgusting, eye-grabbing, and cringe-worthy scenes; it’s difficult to not get totally lost in all the action, forgetting that what viewers’ eyes are really drinking in is the layers and layers of color.

According to color designer Jack Cusumano, each episode of Justin Roiland and Dan Harmon’s hit Emmy Award-winning animated series contains roughly 300 assets that must be colored, and it’s Cusumano’s job - along with Corey Booth and a few freelance color keys, or color designers - to tend to each one, helping to give the show its iconic splashy, psychedelic hue.

“A giant alien mothership might take me a full day or more to even color,” says Cusumano. “It’s hard to describe how much color goes into every explosion or chopped up alien pieces and veins, but it’s also a very emotional process. We're the last stop on the production schedule and I really enjoy being a part of putting together the final picture people are going to see on their TV screens.”

Cusumano has been in the animation business for over a decade, serving as a writer, director, background artist, and color designer. But, before 2013, Cusumano wasn’t even aware that the job of a color designer existed. “I had always just assumed that animators colored their own files,” he reveals. “I also was under the big misconception that it was an easy job for people who are not that good at art, but who still want to be in animation. After doing color design on Rick and Morty, I realized it's way more challenging and nuanced than that.”

“It’s an overlooked role,” adds Daniaelle Simonsen, who worked as a color designer on Gravity Falls, with Cusumano on the Disney animated series DuckTales, and is currently a color supervisor on Shion Takeuchi’s upcoming animated Netflix comedy series, Inside Job. “Color designers are responsible for establishing these nuanced moods and shades, and some of the scenes we color are not just one character, it's entire moments,” she notes. “There's a lot more to it than just filling things in. Not to mention we handle insane volumes of work funneled from the character, prop, and effects teams, with designs that come to us past our deadlines.” Color designers are the visual tone setters for animation, observing lighting, texture, movements, and even the emotions and character development that comes with each scene and action.

“I find the job to be 60% creative and 40% problem solving,” says Jiny He, another DuckTales color designer who is now working with Simonsen again on Inside Job. “I’ll first read the script or watch the animatic to understand as much as I can about the scene I’m coloring. What time of day is it? What are the characters doing? How are they interacting with other scene elements? How is everything working together with the background? Color designers take all of that and try to use color effectively to make all of it work and come together to tell one story.”

But despite color design being a lengthy, tedious process, the final checkpoint on an animation’s journey to production completion, Teri Hendrich (Cusumano), a color supervisor on FOX’s animated family comedy series, Duncanville and wife of Cusumano, says that the job of a color designer, even in 2020, is one of the most under-recognized and under-paid jobs in the animation industry.

“Many of my background and character animation peers really have no idea what color designers do, and what little they do think they know makes them think the job is easy,” says Hendrich, who has served as a background artist for the shows Randy Cunningham: 9th Grade Ninja and Final Space. “Personally, I find the job even more demanding than background paint because you're literally having to keep track of dozens of moving assets and trying to make sure they all are cohesive in color. People have this mentality that somehow color design is this lesser job. That’s why Jack and I decided to change people's perceptions of the work.” “Color Is Design” is a social media campaign started by Hendrich and Cusumano in 2017, not only to educate artists and animation fans about the job of color designers, but also as part of their negotiations with The Animation Guild to earn color designers more recognition as a serious role in the industry, and raise the job’s minimum wage - currently one of the lowest in the animation design industry - to match that of background artists and character designers.

“This all came together the summer Jack and I were offered roles on the first season of Final Space,” remembers Hendrich. “I was offered the background paint position and Jack was offered the color design position. When Jack told me the pay rate he had, it was nearly $300 less per week than any other design position, including mine. I was shocked. It just seemed so low and it didn't make sense to me knowing how much work goes into it.”

This was the same year that Mindy Johnson’s book, “Ink & Paint: The Women of Walt Disney's Animation,” was first released, detailing the women-centered history of the role of color designers, formerly known as “color stylist” before Hendrich and Cusumano got the title changed to “color designers” during their 2018 Guild negotiations.

“Back in the day, specifically at Disney, there was a building for all the writers, story boarders, and illustrators - all of whom were men - and in a separate building, with no air conditioning, were all the women who worked in the Ink and Paint Department,” explains Cusumano. “They would take all the designs the men drew and put the final ink line on it and apply the colors. It was the only animation job that women were allowed to do, and it paid way less than what the men were being paid. And we’re still working to mend that payment discrepancy today.” According to the 2018 Member Wage Survey on the Animation Guild website, the minimum wage for color designers, or “color keys,” is well over $200 below the minimum wage of other design positions such as prop designers, model designers and visual development. And, listed on the Guild’s Wage Scales for July 2018 - July 2021, when it comes to supervising positions, there is an automatic 15% raise on the minimum rate, except when it comes to color design supervisors. “In that instance the studio is not required to give any increase in their pay,” says Hendrich. “Which means, a color design supervisor could be earning less than a regular design artist.”

While Cusumano’s and Hendrich’s previous negotiations focused on earning color designers a place among other animation department “design” titles, their campaign’s current focus, in an effort to raise wages, has been to show that color design is much more work than filling in black and white illustrations. It’s about the psychology of color.

“Filling color in black and white designs is less than 5% of the job,” says Simonsen. “One of the first things that I learned working my first color design job on Gravity Falls, and later supervising for Amphibia, was that everything revolved around telling the story, which means having an innate understanding of what certain colors mean - red is for angry feelings, sci-fi scenes call for blues and greens - and how colors affect the viewer.”

“But my favorite part of the job is in the moments where I get to dive into the meatier part of the show and explore how far to push color rules and boundaries to highlight an idea or message in the show,” she adds.

While working on The Powerful Girls and Star vs the Forces of Evil, Simonsen says the shows’ color palettes - filled with soft pastels - was meant to emanate feminine power and enforce the message that girls can be just as powerful and tough as boys by showing how pinks and yellows can be just as tough as darker reds and blacks.

“Color really impacts how we feel,” says He. “It's such an important factor in our life and the biggest challenge in color design is having to make someone feel something through color. But that’s the biggest part of our job as color designers. We exist to utilize color to make people feel something in their guts. For DuckTales, I even started watching fan videos, analyzing them to see if there were any references I missed and could draw inspiration from for the colors we used.” He goes on to note that color design is its own “visual language” which is rooted in everyone’s subconscious, which is what makes it both vitally important and unrecognizable. “These emotional responses to color are deeply ingrained in our psyche,” she explains. “You will most likely not eat yogurt that is colored brown. But because these decisions stemmed from color are often done on an unconscious level, I can see how color artists can be undervalued by society. But once you begin to recognize it, it adds a whole new layer to the experience of watching these shows.”

For Cusumano, Hendrich, He and Simonsen, it’s that extra layer of story that makes color design worth all the challenges and drives them to move forward in educating people as much as they can about the job. “I really admire all the amazing work that Jack and his wife are doing with their campaign,” Simonsen shares. “Educating people about color design is vital for changing the way people see it. That starts before anyone comes into any studio. I don’t see a lot of classes available in schools for this and I’ve ever seen a portfolio specifically for color design from any student ever. It’s just not as glamorous or sexy when compared to visual development or background paint. But it can be!”

“It’s a big challenge, using color theory, but that’s what makes this job so rewarding,” adds Cusumano. “Despite that it’s the worst paid position in the whole design department, even though I could be painting backgrounds, I prefer doing color design. There is something about that emotional connection to color I just really enjoy.”

Hendrich and Cusumano’s ongoing effort to get color designers equal pay with other jobs in animation design departments has recently made a big stride forward. Hendrich says on Season 5 of Rick and Morty, the production agreed to pay their color designers, including Cusumano, at the same, above scale rate as their background painters after the line producer saw the Color Is Design campaign.

“There's still a lot of work to do to bring color design up to being equal with the other design departments,” Cusumano concludes. “But we've made progress and we're helping spread the word.”