Creating an Ambiguous Reality: How ‘Undone’ is Done

Director Hisko Hulsing talks about the production of Prime Video’s acclaimed animated series, from the many supervisory hats he wears to the sublimity of the writing. 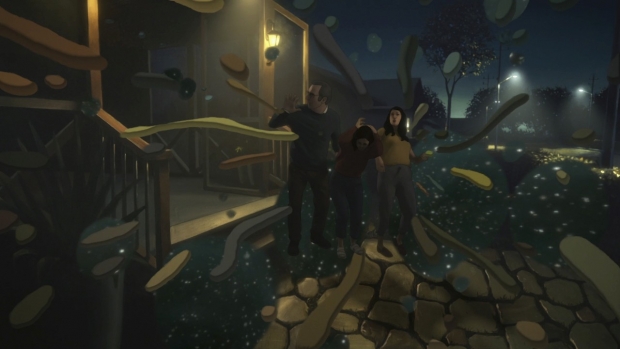 With a rating of 96% on Rotten Tomatoes and a creative pedigree that features BoJack Horseman wranglers Raphael Bob-Waksberg and Kate Purdy, Prime Video’s adult animated series Undone is a force to be reckoned with. Starring Rosa Salazar as Alma, a woman who, after being badly injured in a car accident, discovers that she can travel through time (which turns out to be not entirely the nonstop joyride one might suppose), the series is both narratively and visually challenging.

Key among those who, in addition to Bob-Waksberg and Purdy, are intimately involved with meeting those challenges is Dutch filmmaker Hisko Hulsing, who’s directing a series for the first time. Fortunately, with numerous credits as a writer, animator, background artist, and director of shorts – including Junkyard (2012), which won the Grand Prize at the Ottawa International Animation Festival – Hulsing has more enough creative chops to navigate the many twists and turns that comprise Undone’s unconventional production.

In explaining the parameters of his role in the production pipeline, Hulsing emphasizes that he’s pretty much there from the beginning.

“I come in right after the scripts are done,” he says. “I thumbnail them in order to be able to brief the storyboard artists. I thumbnailed about 3,000 shots for the whole second season. And I direct the live-action, which meant that, for Season 1, I went back and forth from Amsterdam to LA to direct the actors in greenscreen studios and black boxes. For Season 2, I couldn't go to LA, so I did everything through Zoom.” Working through Zoom was quite unwieldy, requiring Hulsing to juggle five screens – “camera A, camera B, previs overlays, storyboards, scripts” – but the lead-up to that was even more demanding.

“Because we film it on a greenscreen stage or black boxes, we need to design everything up front,” Hulsing elaborates. “We do designs of every location and tape them on the ground so that people don't accidentally walk through walls. For Season 2, we prepared by creating or recreating everything, doing previs in 3D, so the two cameramen on the set could overlay the previs in their camera to match the shot. I was in constant contact with them and with the assistant director on the set, and at some point they accidentally started calling me ‘previs’ instead of ‘Hisko’ because I was so focused on that.”

Hulsing is quick to add that DP Nick Ferreiro makes a critical contribution by ensuring that the lighting – which will translate into the shading of the characters – is perfect. Once the live-action edit is locked, the footage is sent to Minnow Mountain in Texas, where the rotoscoping and line animation are done; then the work goes to Amsterdam, where a team of 22 people add the shading, coloring, and 3D animation that give the show its distinctive, stylized look.

The director notes that, while he once did all of the background paintings for his films himself, that’s no longer an option. “For Undone, two seasons is six hours of animation, so I don't have time to paint anymore,” he shares. “I trained a team of about eight painters to paint in my style with oil paint. All the backgrounds are done with oil paint on canvas here in Amsterdam. Then, for the 3D animation, there's a lot of projection mapping of paintings onto 3D spaces. Whenever I want the camera to move on a set, we have to motion track that and rebuild it in 3D. And then projection map paintings on top of that, so you still have a feeling that you're in this painted environment.” As for the decision to use rotoscoping for the series, Hulsing, like Bob-Waksberg and Purdy, felt that it was the only way to go.

“When I read the scripts,” he recalls, “they were so adult, so layered, so sophisticated, that I was afraid if we used animators to act it out, it wouldn't do it justice. It would be too cartoony. There was so much subtlety and subtext. And I thought, we need real actors to act it out, exactly as if it were a live-action film. And so you get all the little micro-expressions, all the little things that you would never get from straight animation.”

If production of the second season was defined by Covid and the challenges of working remotely, Hulsing says, those difficulties were nothing compared to the challenges of putting everything together for the first time. As in the case of the eight painters whose eight individual styles had to be modified in order to create a cohesive universe, the director put a lot of work into creating a pipeline that would meet all of their special requirements.

“Looking back on Season 1, I always compare it to building a car while you’re driving it because we were figuring things out while they were happening,” he says. “I was like, ‘Oh shit, there's no steering wheel. There should be a wheel.’ And so we were building this car and, at the end of Season 1, it was like a well-oiled machine. And when we got greenlit for Season 2, I felt like, ‘Well, I can just jump into a Maserati and put it on cruise control, and it will all work very well by itself.’” Of course that’s not quite the way it happened. Yet, even with the limitations imposed by the pandemic, Hulsing says, the dedication of the team, and the genuine affection they feel for the show, made it much easier than it might have been to produce Season 2.

“I give everybody a lot of freedom,” he reflects, “and I think that most people on the project take advantage of that and use their full artistic intuition and ambition. And that's probably one of the reasons that the quality is so high. That and the scripts that Raphael and Kate and their team deliver, which are so genius and full of things that we start discovering later on. That's the magic of Undone, that we're finding things out while making it, but it's all in the scripts.”