Crafting the ‘Ridiculously Charming’ and ‘Far-Fetched’ ‘Dogs in Space'

Jeremiah Cortez and Adam Henry’s new animated comedy turns our faithful, furry friends into cosmic ‘retrievers,’ though the two creators want viewers to never forget that dogs are not meant to be in space; premieres today, November 18, on Netflix. 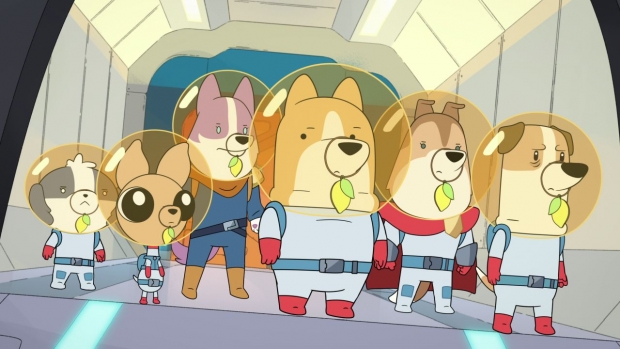 It’s a simple-looking animation with a simple premise: dogs... in space.

Produced by TrollsTopia’s Atomic Cartoons, the series follows an eclectic group of dogs, led by an overly confident corgi named Garbage (Haley Joel Osment) that is assigned by their human owners to scour the galaxy and “fetch” a new planet humanity can call home.

The Star Trek-like, Adventure Time-esque canine comedy showcases a narrative where loyalties are tested, betrayal is revealed, friendships are strengthened, and fairly ill-constructed plans barely, by some miracle, work out. And the imagery matches the show’s comedy, featuring endearing but plainly animated dog characters plopped into space’s most exuberant-styled landscapes. They clearly don’t belong, and it shows.

“I want to make sure, at all times, that the viewers are aware that these dogs are not meant to be in space,” says Jeremiah Cortez, the show’s writer, director, and creator. “Having the dogs designed very simply, with muted colors in their character drawings, and then having the aliens be big and detailed, and the planets that they go to have all these different hard edges and rough textures and vibrant things happening, it’s all to make sure that contrast is always apparent.”

“There’s definitely an oddness about the look of these characters,” adds Henry, who was previously a supervising producer on She-Ra and the Princesses of Power. “But that’s what draws you in. Jeremiah’s art always seems to be slightly left of center, which is refreshing. I’ve seen 50 or more different styles of animation and Jeremiah’s was this offshoot that was so clearly his own thing.” Cortez says he has always been a fan of comedy that’s seen more than heard, and even the story of Dogs in Space’s conception prompts a bit of a chuckle. It all started because of Cortez’s affinity for expensive dogs he knew he couldn’t afford.

“Growing up, and even as a young adult, I always wanted a corgi and I wanted to call him Garbage,” says Cortez. “That was just my type of humor. I wanted a real stalky and stubby-looking dog and give them a funny name. But the price tag for those dogs was really high up there and the likelihood of me ever getting one was very unlikely.”

So, like any talented artist, Cortez decided to bring his dream to life through drawings.

“During my senior year of college, I had a sketchbook that I wanted to use to practice storytelling in a comic book panel style,” Cortez remembers. “And I decided to do a story about a corgi named Garbage, put him in a space suit and give him a couple of friends and bring them on this space adventure.”

He continues, “My peers, my family, my co-workers, everyone who read it loved the characters and kept asking for more pages. It got to a point where I saw how people were really resonating with the story and these dogs that went out in space and just wanted to get home to their owners. So, I decided to start developing a pitch Bible and getting the story ready to get out there.”

Dogs in Space is Cortez first animated series; he’s excited his genetically-enhanced canine brainchild finally gets its debut. And Henry, who came onto the project after Netflix picked up the first season, was excited for the unique world-building this show would require. “Jeremiah’s art at the beginning was just so ridiculously charming, so I knew it was going to be a fun show,” he notes. “There’s very minimal line work with the character designs, but it’s still so expressive. Plus, I love a challenge, and successfully creating a show in a pandemic and getting everyone through the mental health crisis that we all had been going through for a year and a half was incredibly rewarding. Working on this show definitely was good for all of us.”

Apparently, one of the best emotional cures during a pandemic is spending one’s days writing dog puns for hilarious cartoons. But Cortez and Henry say they often had to reel in the writers to prevent the entire show from being a long series of one furry, four-legged joke after another.

“They’re writers and they love their puns,” says Henry. “But we never wanted to hit anyone on the head with the comedy in this show either. It’s kind of like in BoJack Horseman where we see the dog character Mr. Peanutbutter has a trunk full of tennis balls. But the show never says anything about it. It’s just like, ‘Yeah, of course a car-owning dog would have a trunk full of tennis balls.’”

Cortez adds, “It was all a fine line we had to walk throughout the whole development of the show - making sure that we got in just the right amount of dog puns. And we tried to stay away from making too many things in the ship dog-themed, like having bone-shaped chairs and stuff like that. I just love subtlety. I love giving people that reward when they find something that was very subtle and just adds extra content or makes a joke funnier. And we did have a lot of Edgar Wright vibes in the show. 30 Rock was another inspiration, where it is fast-paced, and you have to get these jokes in as quickly as you can.”

But even though Cortez built the series off the art of subtle comedy, he says it was impossible not to throw the writers a bone occasionally. “Luckily, on the show, in the main mothership, there's the seedy underground these dogs have where the dogs get to behave as dogs again,” he explains. “That's where everybody on this show got to have that release of getting their dog pun jokes in.” As much fun as Cortez and Henry had creating Dogs in Space with their pun-loving creative team, they say the best part of working on the series has been finding a family in those they work with - much like Garbage and his crew.

“Being around all the talent and all these people, I can't imagine this show being with any other group of talented artists and writers,” says Cortez. “And I think we did form a lot of good bonds here. Everybody's department roles eventually come to an end - the writers finish their scripts, and the story artists finish their boards. And they all have expressed that sorrow and that bittersweetness of moving on. I do consider everybody on this show family, and it's been a great experience.”

Henry adds, “I made a friend on the show, which, to me, is sometimes more important than even the creative part. We're friends for life now, right Jeremiah?”

The experience also got Cortez’s creative gears turning, now thinking of more stories for Garbage and his space-explorative companions. “I'm hoping for more seasons,” he says. “I'm hoping the show really resonates with people, and they get excited about the story. And I have some other things I would like to pitch as well. The whole experience has got my juices going. So, I’m looking forward to whatever comes next.”

Taking an Old-School VFX Approach in ‘All Quiet on the Western Front’
‘Natural Habitat Shorts’: Like ‘Ranger Rick,’ But for Adults
Framestore Sets Sail on ‘1899’ with New Virtual Production Tools
Animated Characters: The Art of Babbitt – Part 1
Bruce Smith and Ralph Farquhar Talk ‘The Proud Family: Louder and Prouder’ Season 2
VFX is the ‘Thing’ for Tom Turnbull on Tim Burton’s ‘Wednesday’
We Need to Chat
F is for Flake: The (Not So) Great Animation Robbery?
END_OF_DOCUMENT_TOKEN_TO_BE_REPLACED