In Will McCormack and Michael Govier’s animated short, estranged parents of a child killed in a school shooting try to overcome their heartbreak and find each other again; now showing on Netflix. 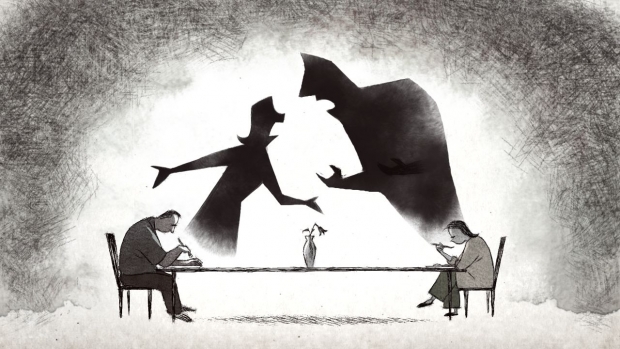 Grief, while a universal concept, is also a complex emotion, difficult to fully understand and pick apart. There are the commonly known stages of grief - denial, anger, depression and so on - though those can also look different for different people. But in the Oh Good Productions animated short, If Anything Happens I Love You, released Friday on Netflix, creators Will McCormack and Michael Govier tackle the wrenching pain of grief through animation, telling an emotional and relatable story that can hopefully help bring people together.

“Michael and I were both interested in writing about how we approach grief, how we adore grief, and even the gifts of grief,” explains McCormack, who co-directed the film with Govier and is known for his work on Toy Story 4 and Claws. “The kernel of this story came from Michael’s idea of shadows as reservoirs of feelings, or souls of people, that human beings can reach in times of great pain.”

If Anything Happens I Love You is a roughly 13-minute sketchbook-style 2D animation that follows the memories, sadness, and healing of two heartbroken parents, an estranged husband and wife, who have lost their young daughter due to a school shooting. As the couple’s shadows weave through the memories of their lost child, filling themselves with blame and regret, their daughter’s shadow works to open up the floodgates of her parents' heartbreak, prompting open vulnerability with the hope of pulling them back together and making the family whole again.

“We wanted to explore grief, express our own grief for the community, and bring together a community that is grieving,” says Govier, co-founder with McCormack of Oh Good Productions. “We've all lost people, loved ones, and this is a way to honor and remember them, as well as show how strong the human spirit is and, even though we're forced into these horrific circumstances, how much we’re enduring with the community.” The film has no dialogue, but utilizes the classical musical stylings of Los Angeles composer Lindsay Marcus and the watercolor splashes of animation director Youngran Nho to illustrate the emotions and thoughts of the roughly sketched characters, which also hold symbolic meaning.

“We wanted the film to look and feel like grief, with these raw edges and a monochromatic feel where the image drops off the frame,” says Govier. “We chose the animation to fit the mood, fit the story, and fit the film we wanted to create. In those rough edges, I think the animation really pulls you in more to the characters and you really feel these emotions, because you're not looking at a lot within the frame. You're not really distracted.” Many scenes highlight single objects, from a crack in the wall, to a blue T-shirt or a record player, with the foreground and peripheral areas of the scene blotted out in white. As the parents’ shadows leave them to float through memories of their child, the same illustration technique is also used for individual moments; if the family is eating spaghetti, celebrating a birthday, or playing soccer, anything not actively involved in that moment is erased, lost in the side white space, giving the viewer the opportunity, as Govier puts it, “to focus on the story of them.”

“We really had a cardinal rule that anything that didn't need to be in frame, we’d get rid of it, and it was pretty exciting to follow that path because we kept stripping it down to get to the actual essence of the moment,” McCormack explains. “We were going for complete parsimony and a minimalism style. We wanted to put a fine point on every scene about what exactly you're seeing. And it was a challenge. But it was a challenge we loved taking.”

Rarely in short films is a single frame or scene wasted; every element works together to drive home what the filmmakers want to say. For Govier and McCormack, even the empty white space has a message to share. “We wanted to capture the loneliness and isolation of grief,” says McCormack. “And I think memory works that way too, when you go into the waltz of your lives with others. You don't necessarily remember what was in the room, but you remember how you felt, and you remember the spirit of that moment.”

The film begins in a world filled with greys and dulled color tones. But finding their daughter’s blue T-shirt sparks memories for the wife and husband, igniting more color in the film; sunset oranges fill memories of family trips, purples for dinner time, pinks for the daughter’s first crush and, eventually, yellow is used to show the family’s healing.

But even Nho and the animation team’s use of color in joyous scenes was sparing. “When you go into the memory section of the film, color starts to show up more, but they’re filtered through the present moment, which is grief,” Govier notes. “That's why the edges are still kind of wrong, but you see splashes of watercolor across those monochromatic edges, and that brings you through the memory. We didn't want the memories all of a sudden in Technicolor, because that's not how you remember things. You don't remember every perfect detail. You remember these flashes and brief splashes of color.” If Anything Happens I Love You was a low-budget short, a “mom-and-pop” film as Govier puts it, without funds to redo animation sequences three or four times over. But, production discussions were detailed, even though the animation and color were minimalistic. And pretty much all of these discussions took place in Govier, McCormack or producer Maryann Garger’s dining rooms or kitchens.

“It's truly independent filmmaking,” says McCormack, who put to good use his and Govier’s 20 plus years of acting experience to create reference videos of the parents and their shadows’ movements for the animation team. “It's like building a snowman, where someone's like, ‘I've got some buttons,’ and someone else is like, ‘I've got a carrot.’ Michael and I pretty much acted out every scene and then the artists brought their own creativity to it. You're really just cobbling together a film.”

“But it was also the most rewarding experience of my life,” he adds. “It was challenging because we were working with very little resources, but in terms of camaraderie, and team spirit, we were pretty wealthy. I felt like everyone who came onto the film was there for the right reason, because they believe in the story and would do anything to tell it.”

McCormack himself became a father while working on If Anything Happens I Love You and says it enhanced his drive to become a voice for those who’ve lost children, bringing him a deeper understanding of what he and Goveir had set out to create.

“That was a big moment,” remembers McCormack. “Becoming a parent is the heaviest thing and the lightest thing in the world. So to have your kids go off to school, to a place that should be sacred and one of learning and growth and safety, and to not have them come home in the afternoon, and talking to parents who've been through that process now that I am a father, it’s really intense. I think that informed me as a person and shed some light on the work.”

He continues, “And to have those conversations where people opened up about their grief, that was a very rewarding and illuminating experience as a filmmaker and a father.” Govier too went through an emotional journey while making the film, watching it bring healing and understanding to his own loved ones, as he hopes the film will do for other viewers. “When my wife lost her brother, those things weren't really discussed in the family; that grief was never truly expressed,” he explains. “But in the process of making this film and showing it to my wife and her family, all of a sudden, her brother Joe is now back with us, because now we're all grieving him together and having these wonderful conversations.”

Both directors believe that these open discussions exemplify the power of animation and the medium’s gift for providing a gentle but emotional impact for viewers. “I don't think that this movie would land the same in live-action,” says McCormack. “It would be too intense, too grave. And there's something about animation that feels like the perfect avenue to get even more to the heart and more to the intimacy of this storytelling.

Govier says the goal of storytelling is that “there's some kind of communion around it,” and he believes that the film’s animation has been a vital tool in providing just that. “This film had to be told in animation,” he concludes. “This subject matter comes with huge feelings, huge emotional responses. This film is showing what animation can do. It's showing that you can have these wonderful, deep conversations and animation is the vehicle to begin them.”