Premiering today on Netflix, Timothy Ware-Hill and Arnon Manor’s powerful new spoken-word animated short harkens back to simpler days when hands up was for blocking shots on the court, not in the streets. 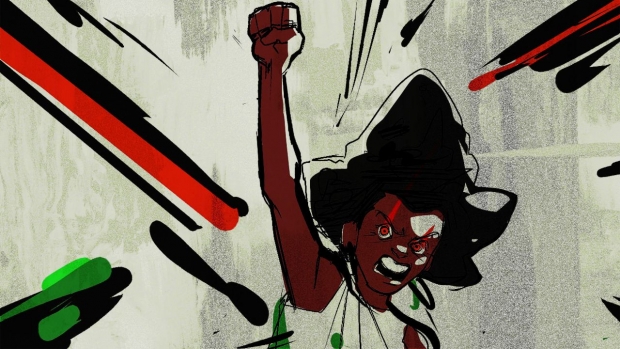 Actor and writer Timothy Ware-Hill, originally from Montgomery, Alabama, grew up hearing first-hand accounts of racial injustice from his parents; they shared stories of their experiences as children participating in the civil rights movement and in the Montgomery Bus Boycott. But for Ware-Hill, his childhood memories of justice were much fonder, like playing “Cops and Robbers” with friends on the playground.

“My life was not a tragic life, and a lot of that is thanks to my family,” he says. “There were moments where we were just kids. We've all been just kids. But the reality is, even as a kid, there were still these atrocities happening.”

Premiering today on Netflix, Ware-Hill’s directorial debut, alongside co-director Arnon Manor, the animated short film Cops and Robbers, weaves together the artistic stylings of over 30 different animators and animation styles, juxtaposing memories of childhood, “when hands up don’t shoot was for B-boys blocking jump shots,” with the harsh history of racial hate, where we see “Brown boys blocking cop shots,” all accompanied by narration of the filmmaker’s original poetry.

“I think that's the beauty of animation, that it allows us to enter into a world we may not always be willing to enter into at first glance,” Ware-Hill shares. “It allows people to put their walls down long enough to be intrigued to figure out ‘Well, what is this really about?’ And maybe, once they hit play, they'll stick through the entire four-minute film and, after watching it, figure out a way to take some action.”

When the video of 25-year-old Ahmaud Arbery, fatally shot while jogging, unarmed, near Brunswick in Glynn County, Georgia, surfaced this past May, Ware-Hill used his writing and creativity to respond. With his iPhone and a gimbal, Ware-Hill took a jog around his own neighborhood, reciting lines from his poem, “Cops and Robbers,” which he’d originally written for his musical, A Taste of Chocolate, still in production.

“In history, they say the revolution must be televised,” he says. “It's the visual images throughout civil unrest that allows other people to say, ‘Oh, this is really happening.’ It was the photo of Emmett Till's casket being open, or the picture of the four little girls being bombed in Birmingham, or the video of the civil rights movers marching across the Edmund Pettus Bridge with John Lewis, that brought the rest of White America to say, ‘Okay, I’ve got to do something.’” Doing something was exactly how how long-time visual effects creator and producer Manor responded. Known for his work on Peter Rabbit and The Equalizer, Manor saw Ware-Hill’s poetry video posted on Instagram and became both enraged by the injustices in African American communities, as well as inspired to create an even greater heart-pounding, message-driven visual for Ware-Hill’s words.

“I was absolutely blown away by Timothy’s video and shocked by the audacity of these inhumans who had shot [Arbery],” remembers Manor, who grew up in Europe. “Being Jewish, I myself had experienced anti-Semitism against me. It was never as violent as what happens in this country against African Americans, but it has made me very sensitive to racial issues, and I want to be an ally to the Black community. I want to be a voice. I want to help in any way that I can. And doing a video and animation and creating content is one way that I know how.”

The idea of animation bringing to life his poetry about missing childhood also appealed to Ware-Hill. “I've been a fan of animation all my life,” he explains. “If you check my Blu-ray and DVD collection, you’ll find animation, like The Secret of Nimh, from the 80s all the way to some of the most current Pixar and DreamWorks films. I even go to bed with a cartoon on every night. I can’t sleep without a cartoon on. So, the idea of animating my poetry was very intriguing to me from the start, because it's a world that I always wanted to visit.” Ware-Hill and Manor co-directed Cops and Robbers, with Jada Pinkett Smith serving as an executive producer. The short, dedicated to “all the black men, women and children who have been victims of racial profiling, police violence, loss of life and other injustices, just for being themselves,” primarily tackles police brutality and wanting to “go back” to the days of playing games like hopscotch, mother-may-I and hide-and-go-seek. But instead of one long animation sequence, Manor decided to break up Ware-Hill’s poem and have a new animator, and animation, assigned to each new line.

In addition to the four-minute animated short, there’s also an additional four-minute tribute dedicated to the animators and their corresponding scenes. “A lot of people gave up their time for free to contribute,” says Manor. “We want them to get recognized for it.”

While Cops and Robbers showcases dozens of animations styles - stop-motion, Claymation, facial-recognition, sketchbook 2D, comic-style, 3D freeze-frame – created by dozens of animators from all over the world, including Germany and Uruguay, the film also casts a spotlight not just on Black lives, but specifically on Black animators.

“I did a deep dive through people's Instagram profiles just by hash-tagging ‘black animators,’ and I discovered some amazing talent,” says Ware-Hill, whose senior post team (Composer, Editor, Sound Designer, Music Supervisor) were African Americans. “Though we have a lot of allyship in this piece with White animators and other animators of color, it was very important that we had Black animators, Black American animators, who know these stories we were telling from personal experience.” There were over a dozen contributing Black animators on the project, including as Kelli Williams, who developed Claymation for a crying mother mourning over her child’s casket; Andrew Roberts, who 3D-animated a paper airplane flying between Black children playing red-light-green-light on the playground; and Kofi Safro, who created a 2D visual of a woman walking through protest signs naming Black trans women whose lives were lost to violence. Throughout the five-month production, amidst the George Floyd killing and protests against police brutality that followed, Manor and Ware-Hill collected handfuls of roughly ten-second animations from artists.

Though Ware-Hill would offer historical context and personal interpretations for his poetry verses, gingerly guiding animators, he says it was still important for “every artist to feel like they were a part of the piece, allowing them to utilize the styles that they love to do.”

“It wasn't a traditional animation process where we have the piece, storyboard it, do animatics, and so on,” Manor reveals. “It really was like putting together a quilt, with an ongoing cut that we would just slot animation into as it came to us from the artists.”

He adds, “The animators would send us concept art that was very rough and raw but had this emotional power. When we would ask them to make some changes, and they sent back a slightly more perfected, Hollywood-type version of it, we would say, ‘Actually, no, go back to that raw version before. That was much more effective.’ So, a lot of time we were actually pushing them back to the rough drawing that they did on a napkin.” Working with Spin FX, Cops and Robbers’ visual effects supervisor Bert Poole and editor Terilyn A. Shropshire developed unique transitions, such as crumpling and ripping paper, gunshots shattering scenes, and posting faces from previous sequences onto protest signs, which weaves the raw, gritty, and eclectic animations together in a cohesive, fluid story.

“I've seen it 600 million times and it’s still mind-blowing,” says Ware-Hill. “We're hoping that through this visual quilt that we created, that we can connect those things from the past with what's going on in the present.”

While gutting viewers with historic Ku Klux Klan kidnappings and current-event-inspired recorded beatings inflicted by police, Ware-Hill says that, stitched into the fabric of Cops and Robbers are also universal messages of longing for simpler times and the sadness of a parent losing a child. “Because the only way that change happens is if there's empathy from those who are not oppressed, when they start to see themselves and not just see others,” he notes. “The last question, the last line, is the most important line in the poem to me. ‘Do you think cops remember being kids when we used to just play together?’ How do our White brothers and sisters, and most of our brothers or sisters who are police officers, get back to the point of remembering just the humanity between one another?” Manor says this relatability is one of the reasons he was struck by Ware-Hill’s poem and why he believes in the animation’s ability to prompt conversation. “Being asked the question, ‘Do you remember when things were nice?’ I still get goosebumps,” he says. “I am amazed at the strength and emotional aspect of it.”

Ware-Hill adds, “That's the beautiful thing about art, it is subjective. It affects every individual in an individual way. But, at the same time, it brings us all together.”

Dude! - ‘Rise of the Teenage Mutant Ninja Turtles: The Movie’ Arrives
‘Super Giant Robot Brothers’: A Milestone in Virtual Animation Production
‘Luck’ Aims to Bring Hope to Kids In and Out of Foster Care
Pre, Tech, and Post: The Many ‘Vizings’ of ‘Chip ‘n Dale: Rescue Rangers’
Hammering Out the VFX in ‘Thor: Love and Thunder’
‘DC League of Super-Pets’: A Family Film Produced by a Family
‘Light & Magic’: ILM’s Story of Family, Fun, and Pioneering Visual Effects
Eric Goldberg and Mark Henn Talk the Magic of Hand-Drawn Animation
END_OF_DOCUMENT_TOKEN_TO_BE_REPLACED