Mixing as many as 25 different music types, from Beethoven to Grimes, into an 11-minute episode, the veteran musician creates crazy tension through juxtaposing well-known tunes with the show’s graphic and violent images. 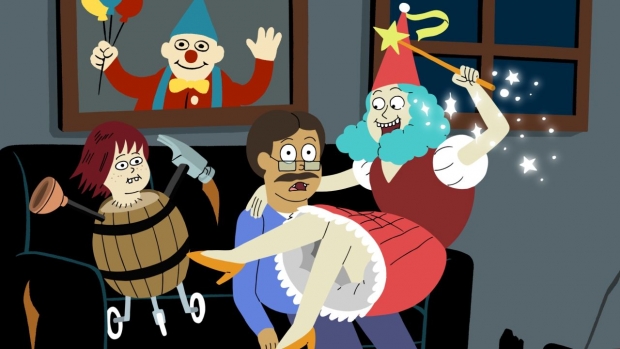 “It always reminded me of that kid who sat in the back of the class always doodling pictures of bunny rabbits with machine guns,” says Neill, who previously worked with Villard on the Emmy Award-winning action-comedy King Star King and is now composing on the animator’s newest series. “He’s got crazy ideas that are just bonkers, but that’s his style and he’s made a great career out of it.”

Ironically enough, it was that eccentric sketchbook-style that caught the eye of Mike Lazzo, the creator of Adult Swim, who put the series into development based off Villard’s sketchbook page titled "Snow White," featuring an evil bunny rabbit and robot cats. Thus, JJ Villard’s Fairy Tales were born. The first season consists of six episodes, each one focusing on a different Brothers Grimm childhood tale, but with a horrifying, disgusting, fun-tastic twist. Boypunzel makes sculptures out of bird droppings, Little Red Riding Hood is a smuggler and amateur wolf butcher, Pinocchio is a head sewn onto a multi-tool barrel…and that’s just the start.

It’s disturbing, to be sure, but in the words of Neill, “That’s what makes it exciting.”

“Whenever a new episode would show up that was just crazier than the last one, I would write text in the script saying, ‘You are a very disturbed man,’ lovingly, of course,” Neill says of Villard. “But JJ has a very different approach to adding humanity and life into animation. He really pushes some extreme boundaries and it’s fun to work in that area.” JJ Villard’s Fairy Tales first premiered May 10 with “The Goldilox Massacre,” and the last episode, “Snow White” aired June 14. While the series challenges even the most iron of stomachs, with bodies turned inside out and, for a split second, eerie messages in bloody letters saying, “Crying session at Pinnochio’s house,” and “It’s ok to give up on your dreams,” it’s all part of the one-of-a-kind, vivid and psychedelic world Villard created for late-night animation advocates. A majority of the starring voice actors are also veterans in the world of twisted tales, such as Finn Wolfhard from Stranger Things, Jennifer Tilly from Bride of Chucky, Linda Blair from The Exorcist and Robert Englund from A Nightmare on Elm Street.

And the show’s score only adds to the freakish fun, consisting of the classical, the electronic, and even a few well-known thrilling and frightening movie soundtracks.

“JJ’s musical concept was to borrow from a lot of different styles, even 19th century classical pieces,” recalls Neill. “He was really hot on the music of Johan Johansson’s score to the fantasy horror film Mandy. It’s a really cool electronic psychedelic score, and that was one of our touchstones. But throughout the series, he hits different movies within the fairytale format. ‘Little Red Riding Hood’ references Sicario and another episode references Silence of the Lambs.”

While juxtaposing beautiful and classical music with graphic and violent images creates plenty of crazy tension by throwing complete opposites into the same creative cauldron, Neill also had to fit as many as 25 different musical pieces together within each 11-minute episode.

“It changes so rapidly throughout the whole episode,” Neill explains. “It’s like an ADD score. But, being part of that storytelling and bouncing all over the place with different kinds of sound, going from Beethoven to Grimes and trying to make it cohesive, was an exciting challenge. It’s like giving birth, you don’t remember the pain, just the joy.”

“‘Boypunzel’ [starring Wolfhard] is one of my favorites,” he continues. “There’s this montage where he and his new girlfriend are frolicking through the town and falling in love. We did it in a classic Disney musical, Little Mermaid style. It was so fun to make that wonderful, lush-style sound and pair it with JJ’s insanity.”

Musical instruments and film tracks were not the only tools used to give audible life to Villard’s magically murderous stories.

“Before the episodes were completed, we’d discuss different movie soundtracks we liked as models, and around the same time I took possession of a synthesizer from 1968 a friend gave me,” Neill remembers. “It makes really crazy growling sounds. So, we used that to make all sorts of throbby, growly noises as part of our template for the score.” Neill says that his and Villard’s vision for the show was as untamed and unpredictable as the wacky world Villard had created. It was a unique challenge, according to Neill, coming from working on animation like King of the Hill, which the composer said was treated more like a “heart-felt, comedy-drama than an actual animation.” With Villard’s fairy tales, however, there aren’t many boundaries, even including Eminem tracks during a scene where a green-haired Rumpelstiltskin decides to lick a toilet.

“It really makes no sense at all with the scene, but it was the right choice,” says Neill. “JJ’s stories are extreme and always unpredictable, so he wants my music to also bounce all over the place to keep things really dynamic and exciting; you don’t really know what’s going on in any one moment during the show. We took a lot of risks that required a real leap of faith with each other.”

But Neill believes those leaps paid off. Though the show fits into an animation category all its own, both in style and content, Neill is confident that JJ Villard’s Fairy Tales will gain a devoted following. “It’s so cool,” Neill shares, “because it takes fairy tales that are so familiar to us and just butchers them, but in a loving way. I think people are really going to take it to heart and I could see people watching this series over the years for a long time. I love the idea that this is the type of show you want to see late at night when you’re really relaxed and getting into a dream state. It’s just so trippy.” “Watching a show like this as an adult, you get that feeling like when you were a kid and you were watching something you really shouldn’t be watching, but it was just so great you couldn’t look away,” he adds. “That’s why this show still feels like it has a kid’s soul behind it.”

Adult Swim has yet to renew JJ Villard’s Fairy Tales for a second season, but all six episodes from season one can be found on the Adult Swim website.