Musician picks up where Carl Stalling left off, returning to Warner Bros. more than 25 years after composing on ‘Animaniacs’ and ‘Pinky and the Brain.’ 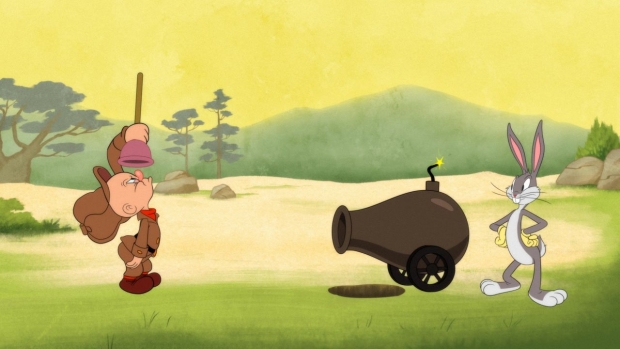 Deciding the best music to illustrate characters caught in a dynamite explosion, being flushed down the toilet or haunted by a tiny ghost bird takes considerable talent, especially on an 11-minute animated comedy careening forward at the only pace slapstick knows how to run: Road Runner fast. But Looney Tune’s composer Carl Stalling was the master and commander of cartoon scores that flowed effortlessly with a character’s every move. Now, Carl Johnson, known for his work on Skyfall and The Magnificent Seven, is stepping into Stalling’s shoes for Warner Bros. Animation’s recent revamp of their classic cartoon comedy franchise with the brand-new Looney Tunes Cartoons.

The famously funny, Oscar-winning world of Tex Avery’s and Bob Clampett’s 1940s cartoon characters is back with more bunny tricks, pig stutters and, of course, explosions that never seem to kill anyone. HBO Max aired the first season of 10 Looney Tunes Cartoons episodes, produced by Uncle Grandpa’s Pete Browngardt, on May 27; the streamer will ultimately program more than 80 11-minute episodes, 1,000 minutes in total, of new cartoons.

Johnson came on board already having ample experience with Warner Bros. animation, having spent 1993-1997 composing for Animaniacs and Pinky and the Brain. While, for the most part, the musical vision behind Looney Tunes Cartoons has stayed true to Stalling’s genius, Johnson says there have been a few changes to help modernize the cartoons for a new generation. We recently spoke with the composer about the show’s wider sound palette, the intensive process of pairing a soundtrack perfectly with animated slapstick actions, Looney Tunes characters he personally identifies with, and what it was like to come back home to Warner Bros. Victoria Davis: It’s a crazy time for television these days. Have you guys been working remotely on the Looney Tunes Cartoons because of COVID or have you been in the studio together?

Carl Johnson: We are working remotely but, in fact, we’ve been working remotely on it almost from the very beginning. I live about two-and-a-half hours away from the Warner Bros. offices in Burbank, so I had been driving in for meetings and mixing sessions. We started doing those things via Skype and Zoom nine months before the Coronavirus ever happened. It was just more convenient.

The musicians I’m working with on most of the episodes, I had been sending them their materials over the internet. They would record themselves at home and then send those recordings back to me to fit into my material, months before the lockdown ever happened. So, we were ahead of the curve just accidentally.

VD: This is also not your first time working with Warner Bros. You’ve also composed for their animated series Pinky and the Brain and Animaniacs. Did that history draw you back for the new series? How did you get involved?

CJ: Warner Bros. decided from the beginning that they wanted composers who had experience working with animation, specifically Carl Stalling-type animation music, as well as comfortability doing both electronic and live orchestral stuff. Working with Richard Stone, the supervising composer on Animaniacs, he was really a mentor to me and was an avid student of Carl Stalling. His whole creative direction on Animaniacs was to make it sound as much like Carl Stalling as possible.

So, I had that experience being aware of that sound and how to use it, holding that up as the idea of animation cartoon music. And to have Looney Tunes Cartoons come up decades later, while I am in a completely different place in my life and career, was really intriguing. A lot of it felt like coming home, coming home to the Warner Bros. lot and coming home to the music I started out with. I feel like I’m completing the circle. VD: Was there any added pressure to working on this show as a reboot of an iconic cartoon series known for such a famous soundtrack?

CJ: There probably should have been, but not really. The creative team on this show, Pete Browngardt and Alex Kirwan, has been very supportive and very cognizant of the giant shoes we are all trying to fill. I think, for me, I felt confident writing in the style because I’ve done so much of it.

Every time you start a project, there’s nervousness because you have to find out what the tastes and preferences are of the creative team, how you’re going to get it done technically and establishing the sound of the show. But the voice of this show is already clearly defined, so it wasn’t a matter of reinventing the wheel, it was just about remanufacturing it. I’m as much of a plumber as I am a composer, figuring out what pieces of pipes work in each situation and making them fit together.

VD: There’s been a lot of media buzz about how Looney Tunes Cartoons is leaving Elmer Fudd’s gun at home, so to speak. There have been some big changes in the series. Was there anything you guys did differently, or new things you hadn’t gotten to do with composing for animation before?

CJ: There actually were a couple things. One was I got to add a lot of banjos to this bit; I’d never worked with banjos before. Something about the sound of that instrument puts you into a crazy headspace. The production process was also a little different. In the decades since working on Animaniacs and Pinky and the Brain, the electronics have gotten much better. Before, on Animaniacs, if we needed a sitar sound, we needed to come up with something that sounded like a sitar but wasn’t exactly the right thing. Now, with sample libraries, we can pull up a sitar patch and we’re good to go. So, we’ve expanded that vocabulary.

But situationally, there are things that happen in the series that are more modern than what Stalling would have encountered. When Bugs Bunny pulls out a cell phone, it’s a very different take on what would have happened in the 40s or 50s. And every now and then, there’s a cultural joke with a 50s surf guitar that wouldn’t have been part of Carl Stalling’s vocabulary. But for modern ears, it works just fine. VD: Looney Tunes is famous for introducing viewers to classical music presented alongside the gags. Are there any new classical pieces being featured in these episodes?

CJ: There’s one episode where I got to use a tune written by Franz Liszt called “Liebesträume,” or “A Dream of Love.” Normally it’s an overly romantic kind of tune, but I got to do it in sort of a comical way on a trombone as a character is reading a poem that brings them to tears. It was really fun because I don’t think I’ve ever heard that tune used that way before and I just had to smile to myself and think that, hopefully, Carl Stalling would be proud.

VD: You’ve also worked on other, different types of animation like Wall-E and The Spiderwick Chronicles. I imagine a very different composition process for animated films versus animated series like Looney Tunes Cartoons, where the music is almost like foley in the way it’s so in line with the characters’ actions.

CJ: That’s definitely the main thing, how closely the music has to synchronize to the picture. The Warner Bros., Carl Stalling style, it’s like hand-in-glove. The music is so closely matched to the picture that, if you miss something by two frames, you can tell. Before I even write a note of music for cartoons like this, I spend hours figuring our tempos so that every beat and subdivision of the beat happens on every frame I need it to. You spend as much time figuring out when the notes happen as you spend deciding which notes you’re going to use. VD: With slapstick being so fast paced, requiring flawless matching to the sound, I’m assuming you get to watch finished animation as you compose?

CJ: I don’t even start until they’ve locked the picture. In this production process, the team has already spent a year or more on each short. They’ve gotten animation in, they’ve replaced it, they’ve tweaked it, they’ve edited it. And it’s not until they feel like every shot and every frame is done that I come on board. It’s nice because then there’s no guesswork for me, I can watch the episode over and over again until it becomes clear what the best way is to approach something.

I do have to be aware of what the sound effects people are going to do too. I don’t want to write something that’s going to get in their way. But Pete has been really great about having me be there for the sound effects dub, making sure I’m included in that conversation, which is very unusual for a production.

VD: Are there any favorite episodes for you that you’ve worked on? Any that were particularly fun and enjoyable to put together?

CJ: My favorites are the Road Runner and Wile E. Coyote episodes. All the Looney Tunes Cartoons are good, but musically, the Road Runner and Coyote episodes are the most challenging and the most satisfying. There’s no dialogue; it’s all about the music, sound effects and visuals. Really, a lot of the storytelling comes from the music and getting inside Wile E. Coyote’s mind.

Somebody once asked me which cartoon character I identify with most and I think it’s probably Wile E. Coyote because it’s always the best-laid plans that somehow come apart in the end. I can sympathize with that. VD: Now that the show is airing on HBO Max, what excites you most about being part of this project, knowing these cartoons are going to release for a new generation?

CJ: It’s an honor being part of the tradition. A year ago, we had a screening at the Warner Bros. theater on the lot for everyone who had been working on this show. This was right before they took it to the Annecy Film Festival. It was an opportunity to watch the whole thing with a live audience and I was amazed at what a unique experience it is to watch these cartoons that way. To hear how people react to it and which things get laughs and which things don’t, it gave me such insight into what it must have been like when these cartoons were first being shown at local theatres in the 40s and 50s.

And now that it’s offered on HBO Max, they’ve got all the classic cartoons on one channel and our new ones are right next door, putting us on a shelf right there with Tex Avery and Chuck Jones. Introducing a whole new generation of people to this kind of animation is exciting. It’s not cutesie or all about laser blasts; it’s all the real art behind expressive animation and the range of motions and effects that can be accomplished with the tiniest little curve of a line or the slightest little shift of an eye. And to do it in the traditional hand-drawn style is really beautiful.