Coming to a Theater Near You: Fall 2017 Animation Preview

From martial arts action-comedy ‘The LEGO Ninjago Movie’ to Pixar’s Día de los Muertos-themed ‘Coco’ and Blue Sky’s ‘Ferdinand,’ some of the year’s most highly anticipated animated features are heading into theaters this fall. Written and helmed by Kenji Kamiyama, the director of East of Eden and Ghost in the Shell: Stand Alone Complex, the 2D-animated Napping Princess is produced by Signal.MD. The film, which opened this past Friday in New York in Los Angeles, is being released in the U.S. by GKIDS in both its original Japanese language and a new English dubbed version.

A thrilling sci-fi fantasy set in the near future, Napping Princess follows the journey of a young girl, Kokone, and her friend Morio, as they set out to find Kokone’s missing father who has been accused of a crime. Kokone soon realizes she must tap into a world only accessible through her dreams in order to solve the mystery. With an ambitious mix of multilayered action, whimsical characters and inventive machines, Napping Princess was released in Japan by Warner Bros. Pictures on March 18.

Known overseas as Ancien and the Magic Tablet, Napping Princess was an official selection at this year’s Annecy Int’l Animation Film Festival, as well as the Fantasia Film Festival, where it won the award for Best Animated Feature.

Here’s the official synopsis and trailer from GKIDS:

And here’s a look at what you can look forward to seeing in theaters through the rest of the season: From Warner Animation Group, with the animation produced by Australia’s Animal Logic, the CG-animated martial arts action-comedy The LEGO Ninjago Movie is one of the most highly anticipated animated films of the year. It is directed by Charlie Bean, Paul Fisher and Bob Logan, and written by Fisher, Logan, Dan and Kevin Hageman and Hilary Winston. Based on the LEGO Ninjago toy line, the movie is an international co-production between the U.S. and Denmark, the first theatrical film to be based on an original LEGO property, and the second spin-off installment of 2014 box office smash The LEGO Movie.

The story will focus on one of the main characters of the Ninjago franchise, Lloyd Garmadon, as he attempts to accept the truth about his father, while a new threat emerges to endanger his homeland. The LEGO Ninjago Movie features the voices of Dave Franco, Justin Theroux, Michael Peña, Kumail Nanjiani, Abbi Jacobson, Zach Woods, Fred Armisen, Olivia Munn and Jackie Chan, and will be released in the U.S. by Warner Bros. Pictures on September 22, in 3D, 2D and IMAX 3D formats.

The battle for NINJAGO City calls to action young Master Builder Lloyd, aka the Green Ninja, along with his friends, also secret ninja warriors. Led by Master Wu (Jackie Chan), as wise-cracking as he is wise, they must defeat the evil warlord Garmadon (Justin Theroux), who also happens to be Lloyd's dad. Pitting father against son, the epic showdown tests these fierce but undisciplined modern-day ninjas as they learn to check their egos and pull together to unleash the inner power of Spinjitzu. Distributed in the U.S. by Good Deed Entertainment, Loving Vincent brings the paintings of Vincent van Gogh to life to tell his remarkable story. Each one of the 65,000 frames of the film is an oil painting, hand-painted by 125 professional oil-painters who travelled from all around the world to the Loving Vincent studios in Poland and Greece to be a part of the production.

The recipient of the Audience Award at the 2017 Annecy Int’l Animated Film Festival this past June, Loving Vincent was also named the Best Animated Film at the 2017 Shanghai Int’l Film Festival. Written and directed by Dorota Kobiela & Hugh Welchman, the film was produced by Poland’s Oscar-winning studio BreakThru Films (Peter and the Wolf) and U.K. Oscar winner Trademark Films (Shakespeare in Love).

France, Summer 1891.. After hearing that Vincent van Gogh killed himself, Armand Roulin (Douglas Booth), is given a letter from Vincent by his father, Postman Joseph Roulin (Chris O’Dowd), to hand-deliver to the Theo van Gogh, Vincent’s brother. In Paris there is no trace of brother Theo. Armand’s search leads him to the paint supplier, Pere Tanguy (John Sessions), who tells him that Theo died shortly after Vincent, apparently destroyed by the death of his older brother. Pere Tanguy recounts how Theo helped Vincent on his incredible transformation from a down-and-out at age 28 to the new artistic sensation of Paris at the time of his death 10 years later. After hearing this story Armand believes he may have misjudged his father’s friend, and really wants to know why Vincent chose the moment of impending success to take his life: Pere Tanguy has no answer to this.

Armand then journeys on to Vincent’s final destination, the quiet village of Auvers-sur-Oise to meet Doctor Paul Gachet (Jerome Flynn), Vincent’s doctor in his final weeks. He stays at the Ravoux Inn, where Vincent boarded for the last 10 weeks of his life, and where on July 29, 1890 he died of a bullet wound to his abdomen. Armand meets the Inn-keeper’s daughter, Adeline Ravoux (Eleanor Tomlinson) and also conducts interviews with Doctor Gachet’s housekeeper, Louise Chevalier (Helen McCrory), the Doctor’s daughter, Marguerite Gachet (Oscar nominee Saoirse Ronan). Down by the river where Vincent often spent his days, he meets the Boatman (Aidan Turner).

Armand gets the sense that much is being hidden from him by the villagers and is determined to root out the truth. A run in with the local police, a chance encounter with a second Doctor, and finally his much anticipated meeting with the mercurial Doctor Gachet, lead to unexpected and heart-rending revelations. Armand then finally understands and appreciates the passionate and surprising life of Vincent van Gogh.

My Little Pony: The Movie – October 6 Get ready for an epic journey with Twilight Sparkle, Applejack, Rainbow Dash, Pinkie Pie, Fluttershy and Rarity to save Ponyville from a dark force in My Little Pony: The Movie, coming October 6 from Lionsgate.

A new dark force threatens Ponyville, and the Mane 6 (Twilight Sparkle, Applejack, Rainbow Dash, Pinkie Pie, Fluttershy, and Rarity) embark on an unforgettable journey beyond Equestria where they meet new friends and exciting challenges on a quest to use the magic of friendship and save their home. Directed by Peter Lepeniotis (The Nut Job), Gnome Alone imagines a centuries-old war waged between the grizzled Gnomes who protect earth and the wacky and hungry Troggs determined to consume everything in sight. When Chloe, the reluctant protagonist voiced by Becky G, discovers that her new home’s garden gnomes are not what they seem, she must decide between the pursuit of a desired high school life and taking up the fight against the ever-multiplying Troggs in a final last stand.

Gome Alone also features the voices of Josh Peck (Grandfathered, Danny Collins), Olivia Holt (Kickin’ It) and George Lopez (Rio, The Smurfs). Patrick Stump of the band Fall Out Boy performed multiple voice-over roles, composed the score and write an original song to be performed by Becky G. Michael Schwartz and Zina Zaflow wrote the screenplay based on a screen story by Rob Moreland and a story by Micah Herman & Kyle Newman. The theatrical debut of Oscar-nominated director Timothy Reckart, The Star is a faith-based family film telling the story of the first Christmas through the eyes of the animals who witnessed it.

Reckart garnered an Academy Award nomination in 2013 for his stop-motion animated short Head Over Heels, his student thesis film produced at the National Film & Television School in the U.K.

In The Star (previously titled The Lamb), a small but brave donkey named Bo yearns for a life beyond his daily grind at the village mill. One day he finds the courage to break free, and finally goes on the adventure of his dreams. On his journey, he teams up with Ruth, a loveable sheep who has lost her flock and Dave, a dove with lofty aspirations. Along with three wisecracking camels and some eccentric stable animals, Bo and his new friends follow the Star and become unlikely heroes in the greatest story ever told -- the first Christmas.

Featuring new music by Mariah Carey, The Star is executive-produced by DeVon Franklin (Miracles from Heaven), Lisa Henson and Brian Henson (The Jim Henson Company); produced by Jennifer Magee-Cook; with a story by Simon Moore and Carlos Kotkin; and screenplay by Carlos Kotkin. Digital animation is provided by Cinesite Studios.

Distributed by Columbia Pictures and AFFIRM Films present in association with Walden Media, Franklin Entertainment and The Jim Henson Company, the Sony Pictures Animation film arrives in theaters on November 17. 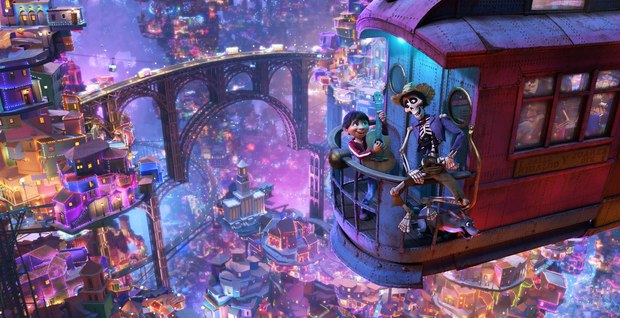 From Disney and Pixar, director Lee Unkrich’s Día de los Muertos-themed animated feature Coco has been years in the making, with fans avidly hanging onto every image and detail the studio has revealed.

Billed as a multi-generational story about the power of family relationships, Coco follows Miguel (voiced by newcomer Anthony Gonzalez). Despite his family’s baffling generations-old ban on music, Miguel dreams of becoming an accomplished musician like his idol, Ernesto de la Cruz (Benjamin Bratt). Desperate to prove his talent, Miguel finds himself magically transported to the stunning and colorful Land of the Dead following a mysterious chain of events. Along the way, he meets charming trickster Hector (voice of Gael García Bernal), and together, they set off on an extraordinary journey to unlock the real story behind Miguel’s family history.

Despite his family's generations-old ban on music, young Miguel (Anthony Gonzalez) dreams of becoming an accomplished musician like his idol Ernesto de la Cruz (Benjamin Bratt). Desperate to prove his talent, Miguel finds himself in the stunning and colorful Land of the Dead. After meeting a charming trickster named Hector (Gael García Bernal), the two new friends embark on an extraordinary journey to unlock the real story behind Miguel's family history. From 20th Century Fox and Blue Sky Studios, Ferdinand -- the story of a giant bull with a big heart -- is Inspired by the beloved book “The Story of Ferdinand” by Munro Leaf and Robert Lawson, and directed Rio helmer Carlos Saldanha.

After being mistaken for a dangerous beast, Ferdinand (voiced by John Cena) is captured and torn from his home. Determined to return to his family, he rallies a misfit team on the ultimate adventure. Set in Spain, Ferdinand proves you can’t judge a bull by its cover.

Ferdinand charges into theaters on December 15, 2017.

A giant but gentle bull must find a way to break free from his captors and return home to his family.

Which movies are you most looking forward to seeing in theaters this fall? Let us know in the comments section!