Animated retelling of the nativity story from the point of view of the stable animals marks the first collaboration between SPA and Cinesite Animation. 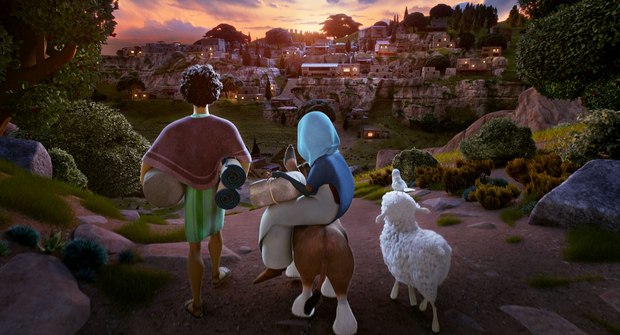 The film, produced in association with Walden Media, is a retelling of the nativity story from the point of view of some of the animals that were present at the first Christmas, including a donkey named Bo who yearns for a life beyond his daily grind at the village mill, a sheep named Ruth who has lost her flock and a smart-aleck dove named Dave, as well as three wisecracking camels, some vicious dogs and other stable animals.

VFX supervisor Chris Kazmier, whose credit list includes such films as Hotel Transylvania 1 and 2, as well as Cloudy with a Chance of Meatballs 2 and more recently, Gnome Alone, explained that the film was produced under a very tight schedule. He reported that the project began late last year, and by February, his team of artists was knee-deep in developing assets for the animation department.

“They were still fine tuning the script and finding the characters at the same time that we were working on it,” he says. “Basically, we had the main characters, but they were still in play, changing from the original paintings, but we did have a lot of characters that could get production-ready.” Kazmier explained that there were more than 50 characters to deal with in the movie, and most of them were animals with a variety of stylized types of fur and feathers, as well as a range of human characters.

“Most of them were furry creatures, so that was a major challenge that we had to conquer,” says Kazmier. “Everybody had stylized grooms to them. Of course, it’s basically a period piece, so the human characters had flowing robes and scarves and there was a lot of sim going on with it, so we were working closely with the animation department. They would come up with different scenarios and ask us, ‘How can we make this character move super-fast or get into these positions without having issues with sim.’”

Animation supervisor Ryan Yee, who was nominated for a VES award in 2010 for his work on G-Force, was tasked with developing the characters and finding the best ways to use the visual language to tell the story through the acting of each character in the movie.

Yee had huge praise for the rigging department for producing so many rigs, for such a variety of creatures, in such a short span of time. “Dany Asselin, Mike Cole and Stéphanie Roy did a fantastic job in delivering all the rigs that animation needed -- anywhere from humans to birds -- to produce a quality that we needed,” he says. At the peak of production, Cinesite had more than 300 artists and production crew along with roughly 100 support staff working on the project, primarily based in Montreal, with teams in London and Vancouver, working closely with Sony Pictures Animation in Los Angeles.

Yee oversaw roughly 75 animators and 17 tech animators in the animation department. He explained that they had to ramp staff quickly for the project and “from an animation supervisor’s standpoint, it was a real challenge to train the team and get them up to speed at the same time we were developing these characters and exploring them with work-in-progress rigs, as we worked through all the technical challenges. Thankfully, all these moving parts came together in the end.”

“We brought in a lot of artists with varying degrees of experience with other studios and [on films with] budgets ranging from $100 million to $7 million and that allowed us a lot of flexibility, technically and artistically, to come up with solutions to produce a project like this on time and on budget with a strict deadline, because of the holiday release date.”

Yee explained that at the outset of production, director Tim Reckart was mainly based in Los Angeles, “So trying to develop a rapport with him proved to be a little bit difficult early on, learning his nuances as a director. Afterwards, we really hit it off and he started to spend a lot more time in Montreal. That offered us an opportunity to really push the development of these characters and figure out the visual language and style of the show.”

He added that Reckart, whose background was in stop-motion animation, was always open to new ideas, giving the animators the creative flexibility to create “caricatures of these animals and the camels are a great example.” At the same time, he adds that “We picked up on a lot of the nuances that Tim likes. He comes from a stop motion background. He loves Wallace and Grommet. He grew up on The Three Stooges and you can see elements of these acting choices sprinkled throughout the film, especially with Dave [the dove].”

Yee explained that in the early stages they communicated with the director via CineSync sessions, as he was always on the move, directing voice recordings in New York, and coordinating with SPA in L.A. But sometimes, when there was a very specific performance he was going for, he would record himself acting a portion out of the scene on his iPhone and then send these videos a point of reference for the animators. “These are kind of the creative solutions and work-arounds that we had to do in order to best tell the story that he wanted to tell, in lieu of him being always physically available in the studio,” said Yee.

When it comes to animating animals like donkeys and birds, Yee explained that “it is always going to have to be based on reality, of course, because that’s what the audience is going to connect with. If anything feels slightly off, they’re going to notice it and it will pull them out of the storytelling process, which defeats the purpose of what we do.”

However the animation style also incorporates cartoony laws of physics like delayed gravity, as well as the familiar stretch and bounce of a cartoon style.

“I have to credit the animation leads for helping to develop and basically ‘character lead’ all these different types of personalities and anatomies -- Jacques Daigle, Silke Jager, Louis Guy Dumais, Chris Kirshbaum, Maxence Verniers, Daniel Harris and Jason Ryan -- they all really helped develop the characters, keeping within the realm of believability, but also pushing the cartoon-y nature which we start to gravitate a little bit more and more to from the start.”

Kamier explained that often the animators would come to him and ask “Can we do this, or is this going to hit us later? It could have been a lot worse technically if everybody was just [assuming], ‘Yeah, I’m sure we can do that.’”

He added that when they animating Ruth the Sheep, who has a very specific groom to her, “[They] were twisting and turning her and I was thinking, ‘Oh no, the groom’s going to blow up.’”

“I think animation always finds a way to break the rig,” Yee quipped. Another technical challenge was Dave the dove, a small bird with cartoon-like movements at times.

Kazmier explained that the challenge was “to keep him together.” He added that the director was very accommodating when they would approach him with alternative suggestions. “Okay, let’s not do this with Dave, but can we do this?” He explained that there were often discussions about “how much is this going take to do, and is there another way that we can do it?”

“I think that basically with Tim [Reckert] being integrated here at Cinesite [later in production], and becoming part of the team, we were able to fast track a lot of that stuff,” he says.

Kazmier offered an overview of Cinesite’s technical set up, which relies primarily on Autodesk Maya for modeling, assets and rigging, all the way to lighting. The facility uses Arnold for rendering and Foundry Nuke for compositing, with Houdini software for VFX. FTrack serves as the project management system. Zbrush was used for sculpting and Speedtree was used for modeling vegetation, all of it is integrated into a proprietary cache format at Cinesite, running on the company’s Linux-based platform.

He explained that since the studio opened in 2016, The Star is its third major production, after Charming and Gnome Alone, which gave the studio the technical maturity to scale up for a more challenging feature.

“It’s been a great opportunity to elevate to this latest challenge,” Yee added.

In what might be considered a bit of “Hail Mary” pass given the stiff competition this year, The Star has been submitted for Oscar consideration for best animated feature, going up against 25 other films for the coveted award.