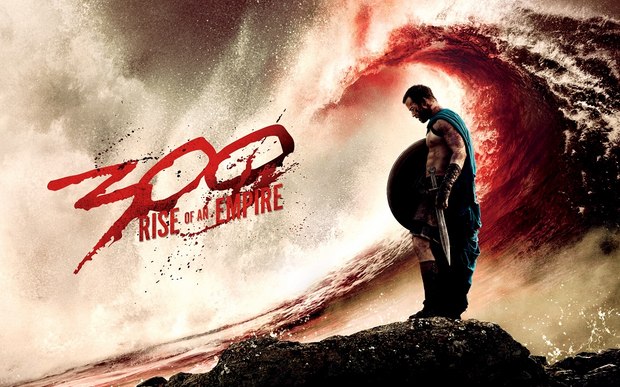 300: Rise of an Empire is a follow-up to the 2006 film 300, although the action in the current instalment takes place prior to the events in the original film. Greek general Themistocles is battling against the Persian Army, which is under the command of Xerxes and Artemisia, to fend off an attack on Athens.  His Greek army joins forces with the Sparta to defend the major cities of Greece against Xerxes’ invasion.

Some of the most beautiful shots created by Cinesite include a full 3D Sparta environment, complete with CG wheat field.  Originally planned as a digital matte painting, the finished environment utilized fur system Yeti to create the undulating wheat, flowing in the wind. Atmospheric effects known among the crew as “ripleys” are a visual motif of Director Zack Snyder, so named because they were inspired by Ridley Scott’s film Legend. These environmental particulate effects were added to many shots in the film; in the Sparta sequence they appear as drifting pollen caught in the sunlight. Other work by Cinesite includes various encampments of the Greek army.  Many were filmed with small sections of live action against green screen, which were massively extended to include rocky outcrops, CG shoreline, tents, moon, sky and campfires, as well as digital armies, sea and sky. Another incarnation of the “ripley” effects was added as drifting, glowing embers from the campfires.  In these night-time shots they give a haunting, ethereal atmosphere. “Working with both DJ and Zach Snyder was a great experience.  Zach Snyder had a very clear, creative vision of what he wanted,” says Cinesite VFX Supervisor Richard Clarke says. “He would often sketch out exactly what he wanted by hand, and we worked very closely with his drawings to create the visual effects. The team delivered to an ambitious schedule, creating fantastic work and pulling together brilliantly.”

This is the latest release of work by Cinesite since the beginning of 2014, which has included Jack Ryan: Shadow Recruit, RoboCop and The Monuments Men.  Other productions scheduled for release in the coming months include Edge of Tomorrow and Into the Storm. Cinesite recently announced that Chloë Grysole has joined its newly opened Montréal facility as General Manager, sharing work with the London offices on X-Men: Days of Future Past and The Man from U.N.C.L.E. Tags
Cinesite
300: Rise of an Empire
VFX
More From ANIMATIONWorld:
Next Post
Marcy Page Leaves Her Mark on the NFBPrevious Post
Book Review: ‘The Book of Mouse; A Celebration of Walt Disney’s Mickey Mouse’