For Stephen, Edward, and Charles Chiodo, their love of 1960s-style stop-motion animation transformed a children’s book about kleptomaniacal aliens trying to steal Christmas into a heartwarming, cocoa-sipping, and warm blanket-snuggling special, available today on Netflix. 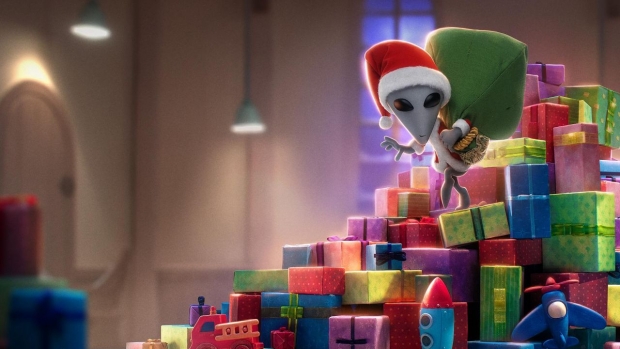 Aliens infiltrating Santa’s North Pole workshop to steal Earth’s gravity might not be the most traditional of Christmas stories, but the gentle-gestured, stop-motion fabric and clay characters of Chiodo Bros. Productions and Netflix’s new animated holiday special, Alien Xmas, ring the nostalgic sleigh bells of classic Rankin/Bass seasonal gems of the past.

“So many people grew up on them,” says Stephen Chiodo, Alien Xmas writer and director. “Rudolph the Red Nosed Reindeer, Santa Claus is Coming to Town... we grew up on them, and it became the cultural conscience of Christmas.”

Edward Chiodo, one of Alien Xmas’ executive producers, along with other brother Charles Chiodo, added, “Those were our benchmarks and one of the initial things that brought us into the love of stop-motion animation.”

Though Stephen, Edward, and Charles have been in the visual effects and puppeteering business since the 1980s - most known for their work in Killer Clowns, Team America: World Police and Critters - their two true loves have been holiday specials and 1960s-style stop-motion. Alien Xmas has been what Stephen affectionately refers to as a “14-year overnight success.” The animator first brought the story to Earth in 2006 through a children’s book of the same name, illustrated by Charles and co-written by Jim Strain, screenwriter on Jumanji.

“It has an interesting history,” says Edward. “It started out as a TV pitch based on a series of interstitials we were working on at the time for ABC Family’s 25 Days of Christmas.”

Stephen added, “I said, ‘Well, if we did a stop-motion special, what could we do? How could we make it different?’ We liked mashing up different genres, so we figured, we love Christmas, and we love sci-fi. We came up with the concept that mixed aliens and Christmas together.” The brothers, drawing from childhood memories of Rankin/Bass Christmas films, created a festive fantasy about a tiny alien named X, anxious to prove himself, who arrives in Santa Claus’ sparkly, snowy, “stuff-filled” Christmas Town with the intent to steal and destroy, but eventually discovers the age-old message about the true meaning of Christmas: to give instead of take.

“People really loved it,” Edward shares. “But at the time, there wasn't really a marketplace or budget that could sustain an original stop-motion special. We had all this development work for our pitches, with not only the story and these characters, but a lot of visuals we created. We took a step back and said, ‘Hey, we have all the assets here to do a book.’ We had an introduction with Baby Tattoo Books, and they fell in love with the concept.”

But now, with streaming services like Netflix taking more of a vested interest in animated films and shows, Edward and Stephen decided it was the perfect time to give Alien X his holidazzling debut, with the help of Iron Man’s John Favreau, who hired the Chiodo brothers to create the opening titles and North Pole sequences for Favreau’s 2003 Christmas classic, Elf.

“[John] loves stop-motion and he was a fan of the story,” notes Edward. “We were just waiting for the right opportunity that presented itself more recently with all the streamers, with all their original content. Back around 2007, there weren't as many options with network television or cable for stop-motion specials. But the market has changed. And John is an advocate and an ally and really helped us fine-tune the story to where it is and get it placed on Netflix.” According to Stephen and Edward, stop-motion hit a type of “golden age” in the 1960s and 1970s, with Rankin/Bass leading the charge. The Little Drummer Boy, Here Comes Peter Cotton Tail and Jack Frost were filled with button-nose, red-cheeked characters, choppy but detailed movements and fabric settings that sparkled. While films like Gremlins set up a new age of live-action puppeteering in the 1980s and 1990s, Stephen believes stop-motion is making a comeback.

“Back in the 1980s and 1990s, [stop-motion] was really viewed as a special effects technique,” Stephen explains. “And then as CG came into play, it took away a lot of the jobs and opportunities that were usually performed by stop-motion artists. In the early 2000s, I think we saw a resurgence. I think a lot of the artists turned their back a little bit on CG and wanted the more tangible art forms like stop-motion, where it is truly magic that you see these inanimate objects coming to life in front of you.”

Stephen believes that while animation initially leaned toward live-action puppets as well as 2D and 3D animation, which made it possible to film more than one frame at a time, more recent technology and award-winning stop-motion features such as The Little Prince and Isle of Dogs are proving how efficient and valuable the craft can be.

“There’s definitely been a renewal since Tim Burton's Nightmare Before Christmas, along with Jamie Caliri’s Dragonframe software, which really aids a stop-motion animator to produce animation more fluidly and quickly,” says Stephen. “Those two things really put stop-motion back on the map. And today, I think we’re seeing a real renaissance in the technique. There's something about family and the holidays and homemade things… I think stop motion really exemplifies the handmade quality of filmmaking and animation.” Edwards adds, “In the interim, stop-motion was relegated to commercials. You'd see animated apples rolling around or whatever. Just mundane things, and then with Nightmare Before Christmas… young people started to respond to it. It’s just another cool thing which differentiates stop-motion from computer-generated imagery which is, at the end of the day, still fake and stop-motion is always real. We had some opportunities to consider doing [Alien Xmas] in CG as a chance to get our project made, but we think it would suffer a little bit, and lose that tangible quality people latch onto.”

But, though Alien Xmas is an attempt to steal back the technique in which it was born, the Chiodo brothers added more fluidity, color, and modern quality to Alien Xmas, making character walks, eye blinks, and facial expressions more realistic and less doll-like. Adding to the realism, characters also fashion a full set of five fingers on each hand, instead of the oddly disturbing signature four.

“You put your 2020 eyeglasses on looking at Rankin/Bass now and, they’re charming, but it's almost unwatchable by today’s standards,” says Edward. “So, technologically, we had to do some updating.”

Alien Xmas also had a few production challenges, such as fitting both a heart-warming message and epic alien battles with North Pole elves into a 40-minute stop-motion special.

“At its core, Alien Xmas is about this little alien discovering the spirit of Christmas, but the scope is an invasion,” says Stephen. “We have a whole race of grey aliens… and then we have Santa Claus, his village, and a bunch of elves. And then we have a robot and a giant gyrotron machine that's supposed to suck up Earth's gravity. So, [dealing with] he massive scope of that adventure was the biggest challenge.” The actual character models also posed a unique obstacle for the film, ranging from a hearty Santa Clause to a small, skinny alien tinier than the smallest elf.

“We had dozens of X puppets and we had dozens of elves,” Edward says. “The logistics of designing them and building them made scale a real interesting concept because the smaller the characters get, the more difficult they become to animate. And then we have puppy puppets that are even smaller than X.”

Despite the challenges, Edward and Stephen both agreed that building settings like the alien spaceship, Christmas Town, and the ice caverns below Santa’s workshop resulted in a “truly beautiful film.” Their favorite scene to create, however, was the large-scope alien invasion, complete with laser blasters and a giant alien leader hologram towering over elf homes.

“I think the battle is pretty extraordinary,” says Stephen. “I mean, here we are in a holiday special and we had to keep it exciting and dramatic, but not too frightening. It is still a family special.”

Edward adds, “Not since Santa Claus Conquers the Martians have you seen a battle at this level.” Holiday celebrations, such as Christmas, Easter, or Halloween, are the backbone of many successful stop-motion productions, with Rankin/Bass going so far as to create a whole Christmas culture around their films. Edward and Stephen hope that Alien Xmas might join the line-up for future holiday special traditions.

“I think we're on a trajectory, that's going to be non-stop for stop-motion,” says Stephen. “As younger audiences see Alien Xmas, see the technique, they’ll embrace it, and then, we hope, they will be inspired in their future as we were when we started. I think it's going to be an ongoing, viable storytelling technique for future generations.”