Executive producers Ike Barinholtz and Matt Craig talk about their wild new adult animated series, a comedic love letter to Chicago and a paean to one of its most disreputable denizens, now streaming on Netflix. 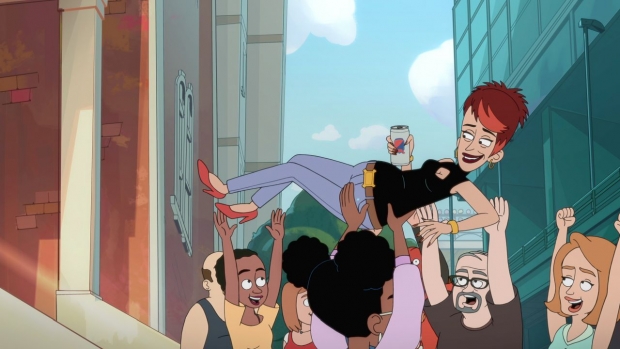 When you’re a diehard native of the Second City, where for four decades you’ve been the life of the party, and you’re now starting to get a little, well, older, and the world around you is changing in ways you don’t always understand, the proper course of action is clear: Crank it up a notch and continue to party your brains out in the best damn city in the world!

Such is the modus operandi of Diane Dunbrowski, the central character in the new Netflix animated sitcom, Chicago Party Aunt, which premiered on the streaming service on September 17. Created by Chris Witaske, Jon Barinholtz, and Katie Rich, all of whom also appear as cast members, the show follows the everyday adventures of Diane and her recently arrived nephew, Daniel, who’s deferred going to college and temporarily taken up residence with his blue-collar aunt in the big city. As one might assume, wacky mayhem ensues.

Barinholtz began by describing the show’s origin as “your classic Twitter feed to animated series.” Surprisingly, this turned out to be true.

“Years ago, Chris Witaske, who all of us were friends with in Chicago, created this [Chicago Party Aunt] Twitter account, which was very funny and also made us nostalgic for Chicago,” Barinholtz remembers. “We would interact with ‘her’ on Twitter and kind of give each other shit. And it attracted all these people from Chicago, who liked the references and the energy. Even Jeff Tweedy from Wilco and Steven Colbert interacted with it. “And then about three years ago, Will Gluck and Richie Schwartz and Dave Stassen [all of whom now serve as executive producers on the show] approached me and said, ‘Hey, do you think this could be an animated series?’ And, as we started talking about what it could be, and started bringing in key team members and components, we realized that we had a totally different, totally weird, super funny show.”

“This was a dream project,” adds Craig. “Ike, Jon, Katie, Chris, Dave, we all have a Chicago background, and a similar style of communication that we used in live theater. I was already involved in animation, so obviously I also got pulled in because of that.”

Of course, a show so intimately connected to a particular location naturally begs the question: will anyone who doesn’t happen to be from Chicago want to watch it?

“It takes place in Chicago and there are little Chicago Easter eggs everywhere,” says Barinholtz. “So people from Chicago might think, oh yeah, I know that hot dog stand. I've been there before. But we also recognized that pretty much everyone has a Diane in their family. Maybe it's an uncle, maybe it's a cousin or brother, maybe it's you. We chose Chicago because it's special to us and it has this comedic spirit – Chicagoans like to make fun of each other and they like to be made fun of, and that spirit is embodied in Diane. But I think anyone from anywhere will relate to the themes and the characters.”

“I think it translates incredibly easily,” seconds Craig. “I'm from southwestern Ohio, but we also had the joke about who's the party animal in our family. We were defining who that person was. If you're from Chicago, I think the show will resonate on a deeper level, but if you're not from Chicago, it will resonate on that shared experience level that we all have.” Apart from ensuring that the show would appeal to those who weren’t lucky enough to have spent time in Chicago, the creators also had to think about exactly who they were trying to reach – and what level of raunchiness to go for – especially in an increasingly crowded adult animation market.

Craig, who started in children’s animation, suggested that what defined adult animation, and what they were striving for, went beyond issues of language or sexuality.

“Truthfully, I don't think there's that much of a difference between how we're trying to reach people now than when I worked in children's animation,” he observes. “I don't necessarily mean that I'd want my kids to watch this. But there is something to be said about the idea that the stories themselves, and whom we're trying to connect with, are similar. It's based a lot on family, on how you connect with one another. And so it's just allowing us to explore those themes and those ideas on a deeper level.”

Like most shows brought to fruition during the past eighteen month, the production of Chicago Party Aunt was complicated by COVID, with the creators having to do much of their brainstorming and communicating via Zoom. Yet both Craig and Barinholtz are emphatic that the difficulties they encountered were made much more manageable by having animation studio Titmouse as their production partner. “They're an outstanding company with really good creative people who are passionate and supportive,” says Craig. “And so all the slings and arrows that we were suffering through together, we found a way to laugh about it. Looking back from where we are now, it blows my mind that we did this in COVID. But the fact that we managed to pull it off had a lot to do with the camaraderie amongst the crew and the great communication with Titmouse and Netflix.”

Adds Barinholtz, “Titmouse and Mike Mayfield, who was our animation director, would always just blow us away. They would pitch us a little extra, like, ‘Hey, this is the way it’s written, but we think if you also do this, it'll be much smoother and seamless and funnier.’ And we're like, ‘Copy that.’ So it was a really great working relationship.”

Interestingly, the most challenging part of the project for Barinholtz had nothing to do with COVID. “Coming from live-action, I had to get used to the reality that you need to have a lot of patience in animation,” he explains. “I’m more, like, I can't wait till we shoot this thing next week. That will be edited the week after that. And we'll be out three weeks after that. So learning patience was a big challenge for me.”

Having more experience with animation, Craig was used to a process where you “have to wait four months to make slight joke changes.” For him, the most daunting thing about Chicago Party Aunt was how much potential it had and not wanting to blow it. “This was the biggest opportunity of my career coming in,” he shares. “I came from the same background that all of these people came from, but I'd gotten involved in animation and had been fortunate to accelerate in it relatively quickly. So for me in particular, this was the show that I really wanted to do. And so the hardest part for me was just maintaining a certain level of integrity.”

He continues, “And so I think we were all maybe squeezing a little harder than we probably needed to be right at the beginning, which was probably complicating how it was going to get done. Because as I'm sure you know, with animation, the more you can give it space to breathe, the more it becomes what it wants to be.”