Cheer and Loathing in animation: Episode XVIII - Quicker it Hits You

Every Friday Chris Robinson unleashes improvised and hastily scribbled cheer or loathing on the animation community to be digested, swallowed or... expelled. This week: part two of a very precious interview with 2017 Oscar nominee, Theodore Ushev. 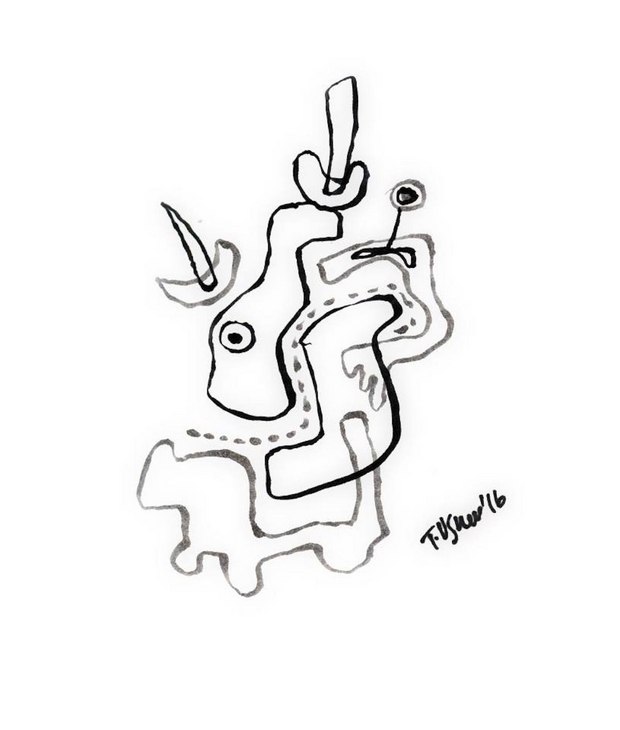 Cheer and Loathing in Animation images by Theodore Ushev

Cheer and Loathing:  As he rose off Simone de Beauvoir, an exuberantly exhausted Jean Paul Sartre lit a smoke, pounded his chest and shouted, “If you ain’t first you’re last”. As Simone struck a smile, remembered those many long sleepless evenings with Camus, closed her eyes and moaned softly. Sartre felt good. "I am a man" he thought loudly, proudly.

Then he added: A man first of all exists, encounters himself, surges up in the world – and defines himself afterwards.

So, Theo, how does it feel to be a loser?

Theodore Ushev: We won, you didn't know? Actually they've mistaken the envelopes in this category as well, but as it was only an insignificant small award, they didn't bother to change. Jokes aside, I'm happy about Pixar' win and the fellow Canadian Alan Barillo. It is like at the Olympics - if 2 Canadians take the Gold and the Silver - it's all settled down and we wave the flag together and sing that "Oh..." song.

CL: I believe it was the German restauranteur Karl Jaspers - after Gene Kelly was robbed of an Oscar for Christmas Holiday - who once likened the Oscars to an unmarked white van that drives through innocent, unassuming neighbourhood streets luring in the young with promises of gold and adoration only to then drive off, devour and rape their souls, leaving them broken and numb on the side off the road. Was this also your experience?

TU: I was well prepared about that white van. In my case, it was a black limousine. As many bad things happened there... My best friend was fighting for his life. He lost his fight, but the night before I had only one prayer: please, don't give me any golden man tomorrow, take it away, but save my friend, give him strength and calm his soul. I believed God heard me. My friend came back and rested in peace. With a smile... (well, this interview is not funny, I’m afraid). But he was playing with his automatic bed, laughing and joking with the nurses till the very end.

As the little things that happened: my luggage broke, a fancy restaurant raped my credit card, Air Canada charged me 3 times the seat and baggage, those little uncomfortable loses were just small details from the landscape of the Dark Side of the Moon. Smile, my friend, smile, it is the City of Stars! Everyone is happy there!

Everything I was thinking about was my friend. My daughter (she was so happy on the red carpet; it was a once in a lifetime experience for her!). If only this, being with her, turned the whole adventure into a positive and nice experience. And, honestly - the AMPAS Academy members and governors are such a nice, kind and gentle people, they really made their best to make us feel great and important and make the experience unforgettable.

CL: That’s all quite tragic and joyous and all that shit…but come on… please stay focused… is the carpet actually red? It looks pink.  Was that really Mel Gibson or a robotic racist? I heard that Bulgaria doesn't even talk to you anymore since the loss.

TU: The red carpet is rather reddish than pinkish. I don’t know about Mel, I only met this actor Andrew Garfield and his father. Actually, my daughter approached them. She said to him that she is a wanna-be-film-director.  Andrew said – of course she is! Now - God saves her father and his retirement savings…  As for Bulgaria – well, they’ll find someone else cheer for…the tennis tournaments are still going on, hope the soccer team gets better soon. If not, the famous Women Hockey team are still on the ice…

CL: Last question, I’ve heard rumours of a Blind Vaysha sequel? Can you confirm or deny? Will it be set in the present or is it historical or maybe a futuristic fantasy thriller? I know that our loyal Cheer and Loathing readers are dripping perspiring beads of excited anticipation.

TU: Sure, they will be a sequel… It will be called the Deaf Vaysha’ Daughter. With her left ear she will hear only the past – with her right one – only the future. So basically, the only thing that she can hear, will be the Robert Pollard and GBV songs. Isn’t it great? At the end, she will ask in her now famous voice: ‘Are we all Guided by Voices of DVD? (DeafVayshaDaughter)’