Cheer and Loathing in Animation: Episode XII - Learning to Hunt

Every Friday Chris Robinson unleashes improvised and hastily scribbled cheer or loathing on the animation community to be mused, countered, or disregarded. 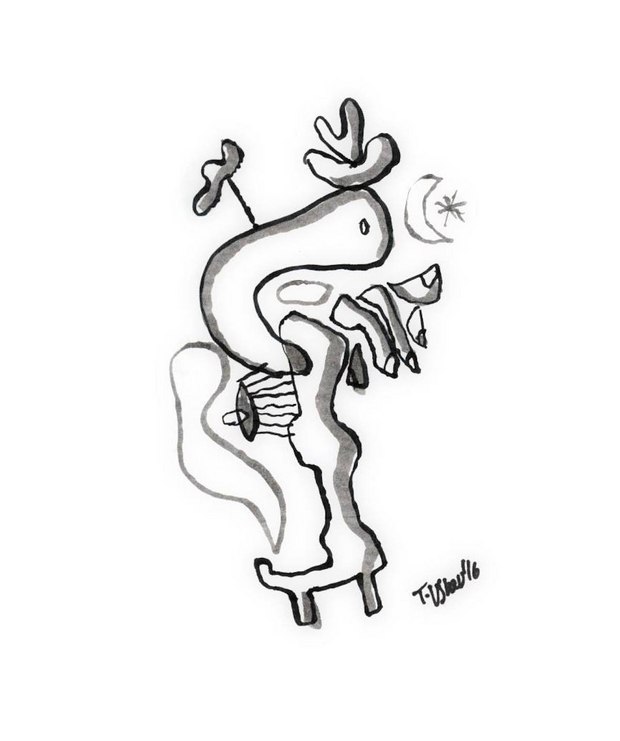 Cheer and Loathing in Animation illustrations by Theodore Ushev

Mark Twain apparently once said that he never let school get in the way of a good education.

But forget him for the moment, I’m more interested in Kierkegaard (yes, him again) and his thinking on reflection. He uses the word a lot in his book The Present Age: On The Death of Rebellion. He says that we reflect too much and it’s a death knell to because it leads to abstraction that conforms to a certain type of person. In a sense I think he’s talking about imitation or how we tend to maybe look outside ourselves for answers about an idea rather than directly negotiating with that idea and forming our own meanings. We are seeing this reflection obsession all over the place. We’ve become a society that hesitates, that wants to see what everyone else thinks first. We fear a misstep and are willing to sacrifice our own gut feeling or instincts to comfortably scoot in with the crowd. I see this in animation in terms of education, festival curating and basic opinions of individual films.  I don't want this to be one of those ‘in my day’ musings cause every era, every person and situation is different. I guess it’s just that with the rise of so many animation festivals and the increase in animation films, well, I also see a lot of folks who seem afraid of themselves. Hey, if you’re going to take on a festival (or make an animation film), it might be good if you had some knowledge of that community.  Now you’d think that would be obvious but you can’t imagine how many people reach out from festivals asking for your films, contacts, favourites. They essentially want you to do work that they will then sign their name below. Fuck that.  When I took over the Ottawa International Animation Festival (OIAF), I had minimal animation experience and knowledge. The one big plus I had of course was the history and rep and archives of the OIAF….  But I busted my ass in those years to go festivals, to reach out to animators for copies of their works. When I did try to get some information, I found that there really wasn't much written about indie animators, so I said fuck it and I interviewed them and wrote about them and learned about them. I certainly got great advice and guidance from some festival colleagues (notably Otto Alder and Gerben Schermer, among others), but for the most part I educated myself and then just took chances and learned (and continue to learn-ish) from a slew of mistakes along the way. When you think that people coming to animation and festivals today have so many films and articles at their instant disposal via the internet, it’s stupefying to me that these kids need to go running to others for so much input (as a side note, despite the mass increase in animation schools, films are no better or worse than they were in the pre-animation school days. Formal schooling can have its pluses if you know what you’re looking to take from it, but for the most part people travelling the indie route could probably do just fine without animation degrees).

There has to be some balance. Advice is fine to a degree, but eventually you have to just walk alone in those woods and figure out a path (as festival organizers for GLAS and New Chitose have done quite well) for yourself.