Cheer and Loathing in Animation: Episode VI - Fine To See You 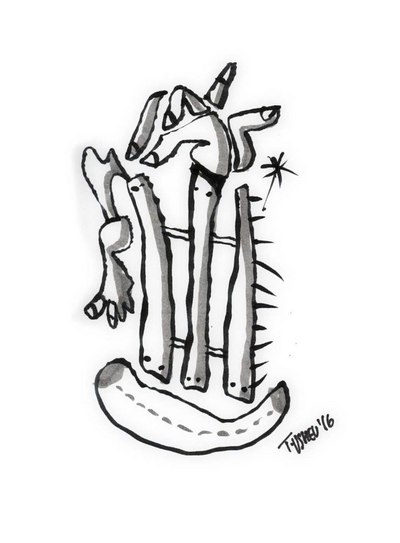 Last week we covered the Cheer and Loathing Top 5 Indie animated shorts (a.k.a. singles or Eps) for 2016. This week, incredibly, we take a gander at the best indie animation features of 2016. I say, “incredibly” because most years it’s a struggle to even find a couple of memorable or at least non-harm inducing animation LPs (a.k.a. long players), but that wasn’t the case in 2016. In fact, it’s a relief to finally see indie animation features maturing. For many years, it felt like animators were just making features – not because they had anything relevant to say – but as a frantic way to get attention and approval from so-called ‘real’ (or live action) film festivals. As such, most of the films stunk. Not this year though.

Here then, kids, are the Cheer and Loathing Top 5 Indie Animation Features of 2016

Not sure why this film - about a Belgian wrestling champion who enlists in the first World War to avenge the raping of his daughter by German soldiers - didn’t get more love (aside from winning best feature animation at the 2016 Holland Animation Film Festival). Perhaps, the motion capture animation scared people off. I’m not much of a motion capture fan myself, but this is a case where the technique complements the story:  in this case a romantic old-school man whose world view is slowly and painfully shattered by events and behaviors on and off the battlefield.

As Nick Tosches wrote once upon a time: “Life is a racket. Writing is a racket. Sincerity is a racket. Everything's a racket.” That’s pretty much at the crux of this mixed media (tall-ish) tale of a guy who, among other things, convinced suckers that goat testicle implants would make them fertile. I’d like to say that this is apt time in history for a musing on the cons and the conned, but let’s be honest here (someone might as well be), the whole of human history is littered in every corner, alley, home and office with hucksters and shadow figures. The big question is why do we keep falling for it?

This poignant feature tells the story of Rosie Ming, a naïve young woman of mixed descent who travels abroad for the first time, to a poetry festival in Iran. Through this initially awkward experience, Rosie discovers the world, her family and herself. Window Horses is a touching and timely tale that traces the pain, confusion and wonder of multiculturalism, immigration, cultural stereotypes and identity.

Ladies and Gentlemen, we have a tie for top spot. These two films are both unforgettable and significant and distinct yet so completely different in tone, temperament and philosophy that it’s really an injustice to try to elevate one about the other.

Jean-Francois Laguionie’s daring (I mean, come on, how many animation films do you see that have an elderly woman as the main/sole protagonist?) and poetic portrait of a forgotten woman shifting through the past as she meanders through an empty vacation town is, in part, an allegory about the alienating aches and pains of aging, yet it’s also about clearing away the noise, debris and distraction around us every minute of every day so that we can discover, understand, and embrace solitude and self. This might be the tale of an old woman, but it’s really about all of us, because, let’s face it, we’re all going out the exit door the way we arrived, alone. The sooner we ‘know thyself’ as some now real real real old person (who might have been young when they wrote it), the more satisfying (well, ideally) this ride is likely to be.

Despite its cuddly looking anthropomorphic characters, this striking, complex and terrifying dystopian fable about an island unhinged by addiction, paranoia, ego, environmental ruin and violence is not for the kiddies (though maybe today’s screen saturated me-me-me runts might benefit from a good scare). A prescient and uncomfortable vision of a place not all that far from here. A Raptor for All Seasons: The Creation of ‘Peacemaker’s Eagly
SCAD Alumni Talk Animation Skills, Careers, and Opportunities
Digital Domain Pushes the Limits of Monstrous VFX in ‘Morbius’
An Interview with Priit Pärn
‘Baymax!’ Provides an Rx for Humor and Compassion
How Digital Domain Brought Photoreal Characters to Life in ‘The Quarry’
Mission Critical: ‘Lightyear’s Journey to Infinity and Beyond
‘The Freak Brothers’: This is Your Humor on Drugs
END_OF_DOCUMENT_TOKEN_TO_BE_REPLACED