Cheer and Loathing in Animation: Episode II - The Power of Pärn

Every Friday AWN’s Chris Robinson unleashes some freewheeling cheer or loathing on the animation community to be mused, countered, or disregarded. It’s your call. 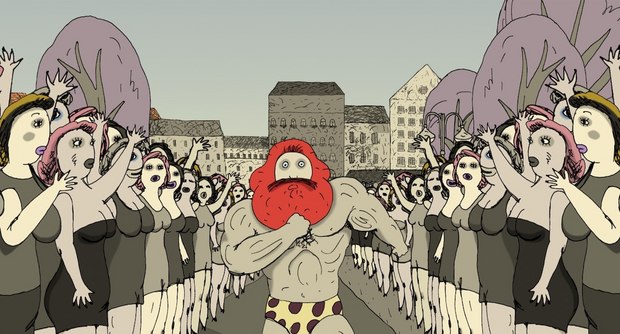 “Why are you obsessed?”

“Fake surrealism.” *(is that even possible?)

Yet, aside from say Pixar and Miyazaki, has there been a bigger influence on contemporary animation than Pärn? From Igor Kovalyov to Superjail!, Pärn’s impact has been vast.

Igor Kovaylov was one of the earliest admirers of Pärn. Oh if I could get ahold of Kovalyov’s pre-Pärn art, you’d see just how strong the early influence was. And like the more successful of Pärn’s paraders (if that’s not a word it should be), Kovalyov took pinches of Pärn but only to complement and develop his own voice. That voice ended up in the U.S.A. in the 1990s and you can see the whispers of Pärn in TV shows that Kovalyov worked on, most obviously The Rugrats and Aaahh! Real Monsters. ‘Bird in The Window’ by Igor Kovalyov.

In the late 1990s/early 2000s, a trio of young Estonians (Ulo Pikkov, Priit Tender, Kaspar Jancis) carried on the Pärn influence. Jancis and Pikkov studied with Pärn at the Turku Arts Academy while Tender learned on the job over at Tallinn’s Joonisfilm studio. Again, while their early films are drenched with Pärn’s influence, all three grew and developed their own unique and strong voices.

Around the same time, a young RISD student had seen some Estonian work at the Ottawa International Animation Festival and what he saw influenced his own witty graduate film, Mr. Smile (1999). You can even see hints of the influence in Krause’s acclaimed comic collection, Deep Dark Fears.

Krause wasn’t the only RISD student to feel the power of Pärn. Jesse Schmal’s graduate film, Sub (2000) and Christy Karacas’s Spacewar (1997). And of course, Karacas carried that influence (one he’s acknowledged) with him when he went onto create the cult TV show, Superjail! (the first season of the show was produced by another Estonian admirer, Aaron Augenblick). Japanese animation legend, Koji Yamamura has never hidden his admiration of Pärn. You can see tinges of Estonia in his film, Your Choice (1999), Mt. Head (2002) and Country Doctor (2007). Yamamura has carried that influenced into the Toyko Arts Academy and even younger Japanese animators like Atsushi Wada and Kei Oyama -- among others -- have some Estonian vibe.

Most recently, works by Marta Pajek (Impossible Figures and Other Stories II), 2016 and Sarina Nihei (Small People with Hats, 2015) have carried the Pärn torch.

What is it about Pärn’s work (which itself is influenced by an assortment of stuff ranging from Pop Art, Monty Python, Surrealism and George Grosz, to The Master and Margarita, Yellow Submarine and animation shorts like Satiemania, 1978) that continues to appeal to animators? I think there’s probably a bit of that Punk/DIY influence. Pärn’s deceptively crude drawings and his non-linear storytelling are universes from the polished and precise works of, say, Disney and the NFB. There is something liberating about Pärn’s work that’s maybe akin to how people felt when they first heard The Ramones, The Jam or The Clash whose short potent riffs and rebellious demeanor vibrated a sense of hope and purpose for a generation of lost adolescents. That might seem like a strange comparison, but remember Pärn’s the guy who created two potent anti-establishment films Breakfast in The Grass (1988) and Hotel E (1992) during Soviet Union times. Those films alone were far more meaningful and bad ass than Never Mind the Bullocks or Rocket to Russia. And when you think of Pärn in that context, it’s not a stretch to see why so many animators continued to be impacted by his work.

Plus, he made one of the greatest commercials ever: