The Charming, Tiny Hero’s Journey of ‘The Snail and the Whale’

Max Lang and Daniel Snaddon are back with an enchanting stop-motion / CG tale about a most unlikely pair taking a sea-going trip of a lifetime. 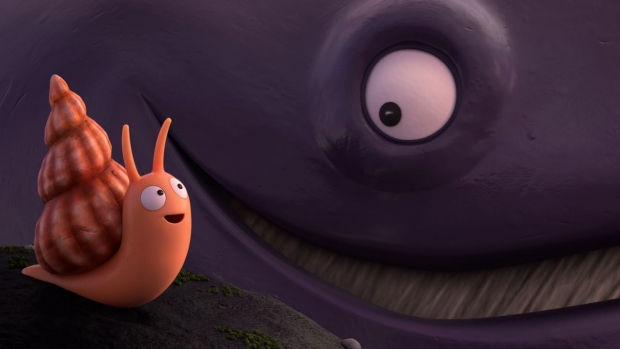 With travel being so limited these days, one of the greatest gifts animation offers viewers is a window into worlds unreachable, such as the tours of “shimmering ice caps, coral caves, and enormous waves” rhythmically described in Julia Donaldson’s 2003 children’s book, The Snail and the Whale.

Two-time Oscar-nominated director Max Lang had wanted to develop Donaldson’s aesthetically charged pages and adventure-driven plot in animation since adapting the author’s 1999 book The Gruffalo in 2009 with Magic Light Pictures; that project, a CG TV special, went on to earn Oscar and BAFTA nominations. But now 10 years later, Lang, co-directing again with Daniel Snaddon, has once again created an animated masterpiece with a Donaldson story; their new 25-minute, award-winning, stop-motion / CG short, The Snail and the Whale, should contend for an Oscar as well.

“I've always loved The Snail and the Whale,” says Lang, who with Magic Light Pictures chose Triggerfish Animation Studios in Cape Town, South Africa to produce the film’s claymation, CG, and VFX. “I love films that you can only do in animation, and to bring these two particular characters to life, you have to use animation. There's no way around it.”

Check out the trailer and a special behind-the-scenes featurette:

“The Snail and the Whale was the first book that I read to my son when he was still inside my wife, so it has a special place in my heart,” adds Snaddon, who joined Triggerfish Animation in Cape Town as lead animator on their 2013 film Khumba, and co-directed Magic Light’s 2015 film Stick Man. “I'm always really excited whenever there's an unusual relationship at the height of a story. It creates immediate opportunities for contrast, for comedy, for characters trying to figure each other out. And you can't get much more contrast than a snail and a whale.”

The film’s remarkably realistic and vibrant animation begins with a tiny peach-colored snail who longs to journey outside the confines of her seaport-adjacent rock home and see the depths of the sea and vastness of the wide world. Writing a note on her rock in glistening snail slime that she’s looking to hitch a ride around the world, the snail is visited by a large humpback whale who offers her a ride on his tail for the adventure of a lifetime. As the snail and the whale encounter warm beachside sunsets, brisk mountain ranges, rainbow reefs as well as dangerous storms and sinister sharks, the snail has an existential awakening about her place in the world and wonders what her purpose could be as a small creature on such a large planet.

“Compared to other Julia Donaldson books that we've adapted, we always had to add a lot to make them work for the animation medium,” explains Lang, who previously co-directed with Snaddon on the International Kids Emmy-winning film Zog in 2018. “But The Snail and the Whale was already really well rounded for animation and has this built in little hero's journey. So, we could really focus on the characters and just bring them to life as opposed to sorting through lots of plot questions.” But despite the story’s natural fit into a film adaptation and the characters being more than fit for an animation debut, adapting The Snail and the Whale was still a hard sell.

“There were so many challenges to consider, especially all the extensive water effects,” explains Lang. “Even when we had written a script, there was this moment where I was not sure if we could actually make this film. Everything was against us; too many water effects, too many sets, too many characters.”

In fact, it was actually another film Triggerfish had in the works that gave The Snail and the Whale the appeal boost it needed. “Triggerfish was gearing up for an hour and a half feature film that takes place in Cape Town, but in the ocean,” remembers Snaddon. “We sold them the idea that The Snail and the Whale could be a sort of preview for that film. It became the in-house joke that our short was the ‘Here’s what’s coming your way’ project for the feature. We then had to figure out a new pipeline that would serve both projects.”

Even with the pipeline challenges, The Snail and the Whale developed a charm all its own during production’s first big hurdles.

“The biggest question, and one of the reasons it took so long to jump into making this film, was if we would be able to form a relationship between a snail and a whale, two characters where the size difference is so big that they hardly fit into the same frame,” says Lang, who directed remotely from Los Angeles with Snaddon overseeing production locally in Cape Town. “They're not anthropomorphic, so they can’t do a lot of pantomime. They don't talk a lot to each other, because we wanted to stay true to the original rhyme of the book and the poetry.”

Snaddon adds, “The very first sequence we animated was the ending of the film. And there's a moment where the snail goes up to the whale, just before he turns around and looks like he's going to leave, where she sort of rubs herself up against the whale’s cheek. It’s a scene where there's basically a giant eye being rubbed by a little snail and snails, in real life, are considered traditionally gross. But when we showed it to the team in a meeting, and everyone went, ‘Aw’ instead of ‘Ew,’ we said, ‘Great, this will work.’” Still, the adaptation - with 3D animation so detailed it would be difficult to distinguish the water and metallic ship close-ups from live-action - proved continuously challenging.

“From a technical point of view, there was a lot I was not prepared for,” explains Lang. “For example, working on color continuity under the water and figuring out how the light hits the water and changes it. Even from a set design point of view, taking into account not just what a beach would look like but what it would look like in the fall, there are all these factors you have to consider. And ultimately, we ended up doing a shot for shot approach. There's hardly any shot that is done exactly the same way.”

“Even the little things, like breaches in the sea foam, turned out to be super challenging,” he continues. “There was always something around the corner that we didn't know and had to find the most effective way to do it.”

Stop-motion characters exploring a sizable CG world, according to Snaddon, required not only technical precision from their animators and VFX artists, but also a “painter’s eye.” Working off video references from nature documentaries and diver videos posted on Instagram, the team worked hard to amplify the aesthetic moments also aimed at spotlighting the mental state of the story’s puny protagonist.

“We did talk about doing stop-motion style for the ocean, but the reason we stuck with a more realistic look is that it's a story about scale,” Snaddon shares. “The whole idea is that the snail goes on this journey to see a giant world with this giant friend, and gets overwhelmed by how small she feels, and how big the world feels. We thought that if we played around too much with the effects, it might actually work against that story point. So, we wanted the water to sell this idea that the world is big by making the ocean its own different, unique character. And even though we were worried because it’s a notoriously difficult task and most of our VFX team had never worked in Houdini, they really put their backs into it and learned as they went.” Lang believes one of animation’s greatest strengths is its ability to visualize character emotions and open the door to tell stories with characters that are “so iconic, and yet universal.” “Everyone can relate with a snail, a whale, a mouse or even a stick because it takes away the things that will make us different or pull us apart and focuses on all the stuff that we have in common,” says Lang. “It’s often these fantasy characters or animal characters who drive that home and what unites us all in our human experience.”

Having grown up in the more industrial regions of Germany, Lang himself says he personally relates to the snail in the story. “There wasn’t a lot of nature where I grew up, so I was always fascinated with that world out there and thinking about it and all these wild animals that you would only get to see in the zoo,” he recalls. “For me, it sparked that longing and curiosity about that world by not having access to it right away. Lots of people can relate to that feeling, especially now.”

In total, The Snail and the Whale took 18 months to wrap and was released in the UK December of 2019. More than a year later, the short has won over half a dozen awards including the New York International Children’s Film Festival Audience Award, Banff Rockie Award for Best Children’s Animation, and second prize at the Chicago International Children’s Film Festival. Snaddon’s son Frank, who is now two years old, has also taken a liking to The Snail and the Whale and other Magic Light productions. “During this COVID lockdown period in South Africa, we've introduced Frank to most of the Magic Light films and, funnily enough, the books he's reading are the same ones that have my notes from production,” says Snaddon. “He really loves them and it's very heartwarming.”

Lang and Snaddon both hope that The Snail and the Whale offers a world of wonder not only to imaginative, wide-eyed children, but to anyone who has ever felt small and helpless. “Especially right now, we are all inundated with so many negative messages about what's happening in our world,” Snaddon concludes. “It's easy to feel overwhelmed, to feel like there’s nothing we can do. But it's not true. That feeling is just a feeling. And to put a story out there that encourages people to still try, no matter how they're feeling, I think it's a real privilege for us to have the opportunity to do that.”