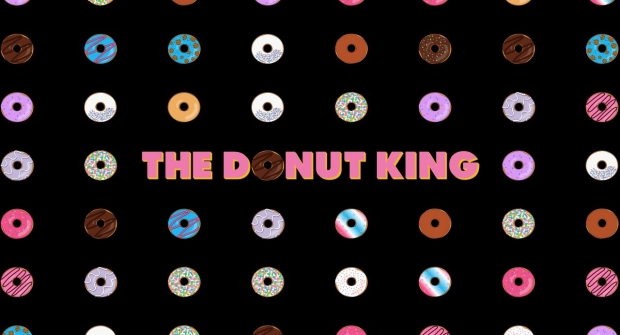 What says California more than donuts? Well, maybe avocado toast. But, when it comes to sweet treats, donuts corner the market. Tastier than the treats themselves is the story of one man’s rise to the top as The Donut King. Written and directed by Alice Gu, the film tells a story of fate, love, survival, hard knocks, and redemption. It's the rags to riches tale of refugee Ted Ngoy escaping Cambodia, arriving in America in 1975, and building an unlikely multi-million-dollar empire frying up one of America’s favorite confectionary delights. The film had its world premiere at SXSW 2020, and was awarded Special Jury Recognition for Achievement in Documentary Storytelling and Special Jury Recognition Poster Design.

Chapeau Studios, a multi-disciplinary creative studio, designed and animated the film’s main titles, crafted in-film motion graphics, end credits, and provided visual effects and final finish. The film’s opening title sequence features skateboarder Daewon Song on an evocative tour in and around some of Los Angeles’ most iconic donut locations. Animated pink boxes and donuts become targets he collects along the way in a “gamified” version of a rad travelogue introducing the documentary film. Californians immediately recognize the pink box as the signature hue of donut conveyance, and this color was the cornerstone for Chapeau’s animation and design palette on the film. The overarching aesthetic, delicious and low-fi, was intended to span retro and current - and incite a deeper appreciation for our sugary cravings.

“Like many of the people who worked on the film, I take pride in being an Angelino and really embraced the opportunity to help represent the way the history of donuts in the city shaped LA culture,” notes Chapeau Creative Director Lauren Mayer-Beug. “We took to heart our connectedness to our city and channeled our admittedly obsessive craze for donuts, continually asking what it is about them that we (and everyone else) love so much.”

The film’s content is not all sweet; Ngoy faces many struggles, both his own challenges and those confronting other immigrants as well. Yet, his vibrancy and good humor are ever-present, providing sunny inspiration to the animation in the film, which was created in Illustrator and After Effects.

One of the film’s key design elements, also created by Chapeau, is a series of maps chronicling the donut wars in Southern California. Like vintage travel maps, these charmingly designed geographic and infographic segments are designed in the style of their respective timeframes - the 70s, 80s, 90s and present day. Set to Macklemore & Ryan Lewis’ “Let's Eat feat. XP Lyrics,” the end credits play off the cheeky humor that many shop owners apply to their donut making that keeps customers coming back for more. Who doesn't want to see a dozen donuts falling from the sky (poop emoji, cronuts and all)?

“Working with Chapeau was a director’s dream,” Gu comments. “I had an extensive wish list which they embraced wholeheartedly with instinct and creative approaches that were perfectly matched with where I hoped to take audiences. The playful opening credits and animation served as a juxtaposition to the darker, serious aspects of the film’s narrative and the maps immediately transport us to the eras and geography the documentary covers. I am proud of the film and can’t wait to share it.”

The Donut King Producer José Nuñez, a longtime collaborator with Gu, is the through-line between the film and Chapeau Studios, where he leads film/video production. “Trust and our shared experience made it possible to dream big and quickly build consensus on everything from bombastic design to invisible visual effects,” Nunez shares.

Gu began her career as a director of photography, working with renowned directors Werner Herzog, Stacy Peralta, and Rory Kennedy. The film is executive produced by Ridley Scott and Frieda Lee Mock.

‘Madagascar: A Little Wild’: A Fun and Emotional Mix of Old and New
Designing the Colorful and Wacky Worlds of ‘Archibald’s Next Big Thing’
Surreal and Psychedelic: The Foo Fighters ‘Chasing Birds’ Music Video
FuseFX Goes Otherworldly on NBC’s ‘Debris’
The Sharp, Edgy Designs of ‘Kipo and the Age of Wonderbeasts’
Behind the Music and Animation of ‘Doug Unplugs’
Mike Rianda Talks ‘The Mitchells vs. The Machines’
Scanline VFX Tackles the Cosmic Rewind in ‘Zack Snyder’s Justice League’
END_OF_DOCUMENT_TOKEN_TO_BE_REPLACED