The former ‘Pinky Malinky’ supervising director’s new series, about a war horse magically transported to a strange land of silly, singing centaurs of all species, shapes, and sizes, premieres July 30 on Netflix. 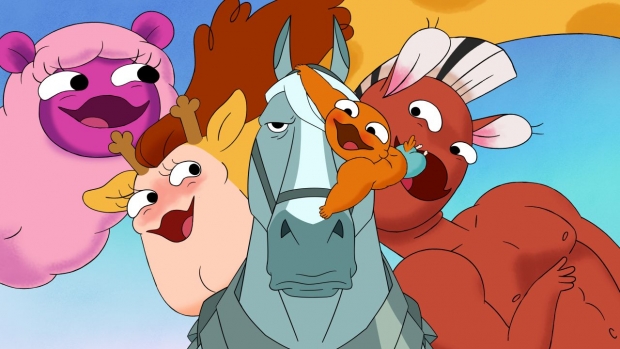 The 2D animated musical comedy begins with a young warrior named Rider (Jessie Mueller) and her valiant steed, aptly named, Horse (Kimiko Glenn), in the heat of a pitched battle. When Rider and Horse are cornered by enemy forces, Horse falls off a cliff and suddenly finds herself trapped in a magical, extremely colorful, strange new world filled with centaurs of every size, shape, saturation, and species.

Initially frightened and extremely put-off by the group of centaur friends she encounters, Horse adamantly states her mission to get out of this bizarrely cheerful world and back to Rider. But as the hardened war horse travels with this new pack of eclectic companions, she learns the value of self-expression and what it means to choose one’s own family.

Produced by Netflix Animation and animated by The Lion Guard’s Mercury Filmworks and Heaven Official’s Blessing’s Red Dog Culture House, Centaurworld reflects not only Dong’s love of both animation and musical theatre, but also her own journey of self-discovery. We sat down to talk with Dong about her own life experiences and childhood passions that inspired Centaurworld as well as the challenges and emotional moments that came with production. Victoria Davis: You’ve stated that this show is a “bit of a monster” to explain, but at its core it’s about finding your people as an outsider and choosing your family. This show actually parallels your story of stumbling into the arts - can you talk about that experience?

Megan Nicole Dong: I was always creative, but there was so much pressure among my peers and family to perform academically and take the “correct” path. So, when I went into high school, I had AP classes lined up and I had this plan to get into a good college. And ending up in show choir was a fluke. It was a scheduling issue. But then I ended up falling in love with it over the course of that year. These were my people and it solidified in my mind that I don't have to go on this preset path. I ended up in animation, but I kept writing music.

VD: This series appears to showcase the best of the worlds you love: animation and music. You wrote the songs with your co-EP Dominic Bisignano. When did the idea for Centaurworld first come for you? How long has it been in development?

MD: I first had the idea five or six years ago, but I was working on other things at the time, and I didn't really feel ready, because it's such an ambitious project. I started developing it in early 2018 at Netflix when they started building an animation studio to do originals. And then we went into production in 2019.

VD: Animated musical series have become increasingly popular in the last couple years. What made you decide to tell so much of this story in song?

MD: I always found animated musicals to be really compelling. And I wanted this show to be something that was really visually fun and out there. To pair that with music, where each episode is almost like its own mini album, which was really fun to play with. I mean, the whole process of incorporating the music was unique to the project, because we knew we wanted a lot of songs. VD: Working on the story, at what point did you see similarities between your personal life journey and the journey of Horse?

MD: I knew from the beginning that I wanted it to incorporate a lot of things about my own story, but I also wanted to incorporate all these things that I love, such as Muppet-like characters. And I like adventure and scary stories as well. And I knew this had to be a musical. I actually started by writing the theme song and then began writing music for the first episode.

VD: The two really stand-out features of this show are the music and, of course, the character designs. I have to ask, why centaurs?

MD: When I was really young, I wanted to be a marine biologist. I was just in love with animals. And I've always loved drawing animals, too. So, I created the most fun world I could conceive out of the thing that I would love drawing the most. And I knew that I wanted the main character to be a horse who belonged to a human because that connection between humans and animals was important to the story.

VD: You’ve worked on other kids' animations in the past, from Pinky Malinky to Captain Underpants - stories that have these heartfelt elements but are wrapped in a bizarre package. Is that a niche you gravitate toward?

MD: I think that's an accurate way to describe my sensibilities. I like things that are unexpected. I like things that bend genres a little bit. But I also like humor in things that are sincere. Sincerity is something I prefer. And what appeals to me about that is I feel like you can push things a lot more. You can have disparate elements if the characters are emotionally genuine. It's a really good glue to combine all these different elements together. VD: Centaurworld also has a similar look to Pinky Malinky with all the 2D animation and bright colors. How did you first decide on the design for the series?

MD: These were characters that I had been drawing a lot. In addition to working in animation, I was doing comics for social media and the web. So, when I was initially designing some of these characters in this world, it was much more scribbly, looser and more exaggerated stuff in a sketchbook. And when we designed the characters for the series, we went towards that pen on paper, marker style. We wanted it to feed hand-drawn like it had a paper texture to it.

VD: There’s so much contrast visually and personality-wise between the main character Horse - who’s very monotone in color and down to earth - and the centaur characters who are all extremely vibrant with bold personalities. Was that contrast an intentional choice to create more space for a bigger dynamic between those characters?

MD: Definitely. I wanted to make Horse a muted, bluish gray, and all the centaurs very bright. And, in particular, the character Wammawink, to build a tense dynamic between her and Horse. This way, there are more places for those characters to go. I wanted there to be room for Horse to really change, inside and out, as she gets more immersed in this world.

VD: There are so many different kinds of characters within the centaur world - not just different colors or kinds of horses, but other creatures such as half-human apples and bees. What inspired you for such diversity?

MD: I love biology and I wanted to create a world that felt really inclusive. I wanted characters of all shapes, all sizes and different body types. Anything can really be a centaur, even some of the trees. And, if you look in the background, sometimes a mountain or a sun has a face on it and some legs. It’s been a really fun space for us to play with as animators.

Honestly, one of the toughest things was just drawing an anatomically correct Horse, because horses are notoriously difficult to draw. They're shockingly hard. We were really lucky that James Baxter, who animated Spirit, is at Netflix. He kind of did a class for us. VD: With horses being so hard to draw and animate, did the music add another level of difficulty, trying to get everything anatomically correct while moving fluidly to the music?

MD: For almost everyone, from our design team to our storyboard artists and animators, the musical element was a new thing. So, we referenced a lot of stage lighting and theatrical moments from Broadway shows. But, in the series, as the centaurs and Horse travel around the world, different areas they visit have different musical styles. One area had more stadium rock, so we would look at Queen concerts. It was a big challenge to figure out the best way to visually represent these songs, but we had a lot of fun.

VD: This has been an incredibly fun and personal journey for you - were there moments where that felt reflective and personally insightful than others? Did you feel like you learned something about yourself while working on this series?

MD: When it came to writing the music, we were really getting to know these characters. So sometimes, in the process of writing a song, it would be really emotional because I’d get to the point where I’d know exactly what that character would sing about. And a lot of times, my co-EP and I, we'd sing these songs to each other, just rough demos, or we presented them to the writers’ room, and that was an emotional experience, too. It was unlike anything I've ever done before. VD: There are a lot of golden nuggets in this wild, wonderful show, but if you could narrow down one thing that you really hope viewers take away, what would it be?

MD: I hope that people experience joy and emotion when hearing the songs and watching these characters. But the other thing I hope comes through is that we didn't shy away from dark themes. The characters have flaws and a lot of those come from implied trauma that they have gone through. So, I hope that people notice themes of healing and community and relate to that, too.