Showing us the road to the future of stop-motion, LAIKA celebrates the 10th anniversary of ‘Coraline.’ 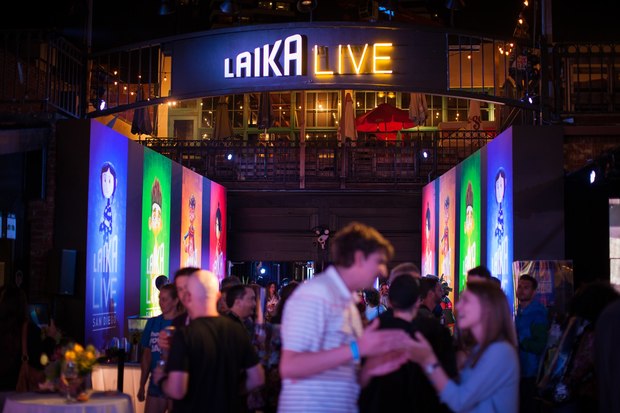 Going strong since its founding in 2005, LAIKA Studios out of Portland, OR has already shared with us many of the best stories animated with a mixture of digital and analog. The LAIKA LIVE! 10th Anniversary Celebration of Coraline at San Diego Comic-Con told us the story of the future of the studio, the films, and stop-motion animation. Animation enthusiasts lined up early for access to the exhibition that was situated right on the main street of the Gaslamp quarter.

The exhibit was set up in San Diego’s Gaslamp district a block away from the San Diego Convention Center and was swarmed by excited fans and animation enthusiasts at every moment. The entire space radiated a creative energy that held its own against the Comic-Con throngs and only enhanced when one stepped inside.

LAIKA had brought down from the studio a fully immersive experience that featured fully-realized sets, the “puppet hospital,” and many props and favorite animation pieces from Coraline, The Boxtrolls, ParaNorman and Kubo and the Two Strings. Along the loop of the showcase were actual LAIKA animators and background artists (in their natural habitats) giving live demonstrations of the animation process and puppet construction. Each and every LAIKA team member had their niche and relished the opportunity to help people understand just what goes into creating a stop-motion feature.

The Coraline House welcomed viewers to the incredible miniature world of LAIKA at the entrance to the exhibit. Animation demos were being conducted using one of the Kubo and the Two Strings sets and various characters and armatures from ParaNorman were on display disassembled into their most basic elements. Kubo was the first of the LAIKA films to utilize 3D printing in their animation from start to finish. Coraline had approximately 2,200 faces created in greyscale and sent for painting. That means that somewhere out there are over 2,000 individually painted Coraline heads. With the advancement of the 3D printer, Kubo’s heads and faces could be 3D printed in color.

“You’d think with 3D printing our work would become easier,” said Sam Wilson, with the smile of someone resigned to loving what they do forever, “but instead we just did more.” Kubo ended up with 77 thousand heads in comparison to Coraline’s 2,200. The new system of interchangeable faces printed meticulously in color meant that animators could focus on accomplishing more. Instead of creating faces based on general emotions, faces were printed on a scene-by-scene basis, allowing for every shot to have its own individual look and feel to suit the moment and circumstance. There were 60 million facial combinations in Kubo, and LAIKA was just getting started. Coraline’s face was split up into two halves that were interchangeable for better range of visual emotion, but the seam between pieces had to be edited out in post-production in every single shot.

The stories that drive LAIKA have advanced alongside the technology, and the next film in LAIKA’s roster is Missing Link, starring Zach Galifianakis as a yeti with a secret trying to find his place in the world. All LAIKA films up until now have had a darker theme. The first four films deal heavily with death and fate, starting with Coraline learning to value what she has before it’s gone, through misunderstandings with ParaNorman, to dealing with loss in The Boxtrolls, and, finally, making a brighter future with Kubo and the Two Strings.

“Missing Link is about life,” explains Martin Pelham, a LAIKA veteran of six years. “He knows something you don’t know yet!” Martin says Mr. Link has unseated Neil from ParaNorman as his favorite LAIKA character. “Link’s the best, most lovable character. I know you’ll love him.”

Breathing may come naturally to most of us moving our own armatures day-to-day, but animating breathing is something to be marveled at, let alone a realistically jiggling belly. Every animator we stopped to talk to about Missing Link mentioned the belly jiggling, the breathing, or both. We have never been so excited to see a belly jiggle on the big screen.

Special guest Teri Hatcher (Coraline’s Other Mother) and LAIKA head Travis Knight, as well as Neil Gaiman (aka The Best Author Ever), and Coraline director/screenwriter Henry Selick put on a true celebration of stop-motion animation and LAIKA’s first film. With Missing Link heralding a shift in the studio’s themes, and the consistent quality of the animated features and design, the entire San Diego Comic-Con LAIKA LIVE experience invited everyone to embrace LAIKA’s personal story and look forward toward April 19, 2019 when Missing Link shares his secrets with the public.

‘Missing Link’s main character Mr. Link (voiced by Zach Galifianakis) peeks out from one of the actual sets brought down to San Diego Comic-Con for LAIKA LIVE!