The Catharsis of Voicing Donald Trump in ‘Our Cartoon President’ 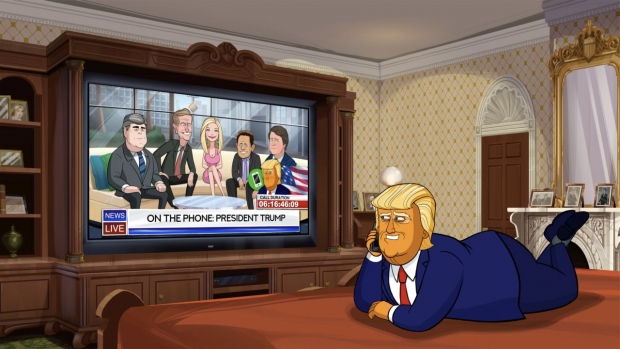 For over 30 years, children’s cartoons have been voice actor Jeff Bergman’s bread and butter. Lending his versatile vocals to iconic Warner Bros. characters like Bugs Bunny and Daffy Duck, as well as Hanna-Barbera favorites like Fred Flintstone and Yogi Bear, has given Bergman a chance, as he puts it, to “prolong my childhood.”

But, amidst voicing characters for the recently rebooted Looney Tunes Cartoons, Yabba-Dabba Dinosaurs! and his first animated feature film Space Jam: A New Legacy, Bergman has also taken the dive into adult animation by taking on Donald Trump in Stephen Colbert’s workplace animated comedy, Our Cartoon President. Co-created by R.J. Fried, the series premiered on Showtime back in 2018 and is based on real-time interviews which began in 2016 between Colbert and an Adobe Character Animator-animated Donald Trump, voiced by Brian Stack, on The Late Show with Stephen Colbert.

Our Cartoon President pulls back the workplace curtain on White House goings-on during Trump’s presidency, and takes a comedic approach not only to political events, but to humorous illustrations of the relationships between the Cartoon President and his family as well as members of congress. Even the media and political commentators aren’t safe from the animated mockery. The show is groundbreaking in both its fast-paced animation production and how brings to life the political caricature and cartoon satire so many have grown up reading in newspapers.

The show is now nine episodes into Season 3, with Episode 10, “The Nominees” premiering Sunday, September 13. Bergman, who voices for both Democratic nominee Joe Biden and President Trump in the latest season, says working on Our Cartoon President has been a “cathartic experience” and a fantastically funny time. We recently spoke with the voice actor about becoming the cartoon Trump, how the character’s personality parallels Fred Flintstone’s, and the beneficial union of animation and political banter. Victoria Davis: You’re most well-known for the voice work that you’ve done on Warner Bros. and with Hanna-Barbera characters, but have you ever done anything like Our Cartoon President before? Something that’s so edgy and has such politically charged humor?

Jeff Bergman: No, this is the first time I’ve ever done anything that’s so seriously ridiculously political.

VD: Ridiculous is right! Since it is so different, what was it that attracted you to this show? How did you land the part of Donald Trump?

JB: Oh my god, it’s everything from cathartic to non-stop laughter. The writers on the show are so funny and they’ve written such amazing scripts for us. And, of course, we have a plethora of materials to work from. It’s just unending and it’s been incredibly fun.

When it came to getting the part, I was doing some work for Funny or Die Donald Trump and Hillary Clinton were campaigning. Funny or Die went to Ohio where they set up a conference room with Trump supporters to show them a phony ad campaign where I was the voice of Donald Trump for this outrageous ad, talking about electrocuting border defense fences and such. And when auditions came around for Our Cartoon President, our showrunner R.J. Fried was the first to campaign for me to voice Trump.

VD: You’ve voiced for so many popular and beloved cartoon characters, and it does seem fitting that you would voice for a little less beloved, but just as memorable character like cartoon President Donald Trump.

JB: I definitely agree. I have to read the scripts sometimes two or three times, so I don’t break out laughing while I’m recording.

VD: I’ve read in other interviews that you’ve said nothing has been more fun than voicing for Looney Tunes, but it sounds like your experience on this show has also been extremely fun and uniquely funny and, as you mentioned before, cathartic.

JB: Very. We are all experiencing 24/7 political news and monitoring how much of that we take in. But, for me, when I watch the news, I’m watching it because I’m preparing for a script or an episode from Our Cartoon President that I’ll have to do. So, any sort of frustration and anxiety I have from the news, I get to let it all out when I’m recording. I honestly really wish everybody could have that. Laughter really helps to neutralize stress. VD: With it being such a cathartic experience in those recordings, how did you go about finding the right voice for and getting into character to be Donald Trump?

JB: I approached doing the voice of Donald Trump very similarly to what I did for voicing Bugs Bunny or Daffy Duck or Fred Flintstone. People have an idea in their mind about what a character sounds like, especially the longer the character has been around. We all knew Donald Trump prior to the election as The Apprentice and “You’re fired!” So, I went back and studied interviews with him, even from when he was in his 30s, to make that character as realistic as possible.

He has definitely gotten a lot more amped up and animated since his presidency, which really works for the animators. And, in the show, the writers have tried to make him realistic but also a little more likable and enjoyable.  People often tell me they prefer the cartoon president to the real president. We gave him empathy and silliness. Lots of silliness.

VD: There does seem to be a little bit of Fred Flintstone in Trump’s character on the show. And this whole series is about amping up these characters’ personalities to an animated level. Do you ever accidentally slip into one of your old cartoon characters during recordings?

JB: All the time. Fred was sort of a blustery character, very braggy and precocious, and Trump is also brash. After doing Fred for so many years, I’m not surprised I’m affected by that. The more voices you do, the more you have to catalog in your head and distinguish different voices. I also voice for Joe Biden in the show now. He’s a very different character from Trump, so he has his own catalog. And it’s true, we do heighten the characters, we push the envelope with their personalities, exaggerating things to a tremendous degree to make it funny and more fun to watch.

VD: You’ve worked a lot with 2D animation, but this show has a very different style from Warner Bros. and is almost like Archer in the way the characters move and deliver lines pose-to-pose like puppets. Did that have any effect on the way you approached the voices?

JB: Typically, we record the voices first and then the animation gets made, so I think it’s more that the animators are getting inspired by our reads and the vocal track. VD: In that case, is it amazing, after you voice for Our Cartoon President, to see the scenes all put together where the animation amplifies that character even more?

JB: Oh my god, it is a weird thing and it never gets old. The surprise is always there. You do the recordings and you have no idea what they’re going to use or how they’re going to bring it to life. But then you look on the screen when it’s finished and you’re like, “Oh my god, that’s me.” I mean, it’s me, but it’s also really not.

JB: Yes, I do. Especially for millennials or people who might be even younger, this is a softer way, a kinder way, to help them become cognizant of what’s happening in politics and the media. I don’t think this is much different than looking at The Daily Show with Jon Stewart or John Oliver. This is like an animated version of John Oliver on The Daily Show. It’s ridiculous in the best way.

VD: Animation also allows Our Cartoon President to be humorous on multiple levels, not just with the political jokes, but also the joke of your being the lead voice actor for both Joe Biden and Trump and, essentially, campaigning against yourself. What’s that been like in the new season?

JB: It’s crazy! I don’t want to give anything away, but there are a few scenes where Trump and Biden are having an exchange and we record those separately so I can stay totally in one character or the other. Getting in the headspace of these two politicians is wild because they’re so different, but it’s really no different from when I was doing Bugs Bunny and Daffy Duck. Those two hate each other too; they’re rivals. And, honestly, I think there’s a funny, weird correlation between those two pairings: Trump and Biden and Daffy and Bugs. VD: With Season 3 focusing on the campaign, there’s even more edgy humor involved, and I can only imagine what Episode 10 on the nominees will be like. Do you have any favorite scenes or episodes from this new season so far?

JB: Of course, nothing tops the feeling I had during Season 1 of going into the show and knowing I got to say things like, “Fake news!” I mean, when I saw myself as an animated Trump with his belly hanging out, flipping through the news and my voice coming out of his mouth saying that line, it was insane. And in Season 2, we really broadened the political landscape and brought in new characters like Bernie Sanders. But with Season 3, there are even more characters and we’re doing music, there’s actually musical scenes. The creators are really pulling out all the stops here.

VD: Having spent so much time on shows geared toward kids and now diving into adult animation with Our Cartoon President, how has working on this show amplified your love, or appreciation, for the medium?

JB: One of the things that really impressed me about Our Cartoon President was the realism with the animation of the characters. When I was in New York, all the animators and the writers had offices in The Late Show building, and I got to go up there and see how each animator was working on a certain character. It was so personalized. When I saw the animation for Bernie Sanders and Elizabeth Warren, I couldn’t believe how much they look like the real people.

These animators also really capture the essence of people so perfectly for this show. I mean they nailed it, which just shows you the scope and the power of animation to capture the personality of people being portrayed. It’s not just their looks we’re amplifying.

VD: There hasn’t been a confirmation for a Season 4 for Our Cartoon President but, if the show is renewed, do you think the outcome of the election could shift the tone of the show?

JB: I think it’s going to be perfect. Whatever happens, whoever wins, whether it’s Biden or Trump, I think there’s still so much to draw from and still so many jokes to be had.