A Cat, a Badger and an Incredibly Cute Bat Walk into an Adventure… 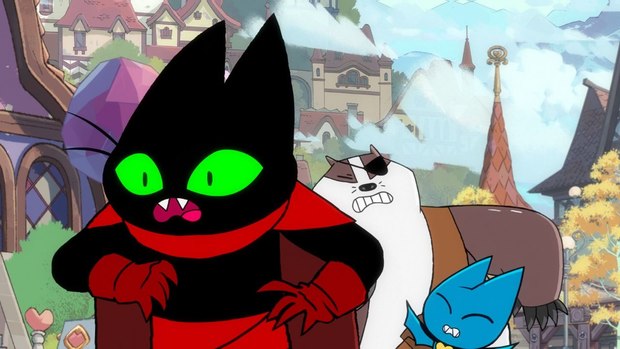 Once upon a time, there was an animation studio called Titmouse that had a special event each year where their animators were given a paid day to create anything they wanted, the only stipulation being that the work had to be five seconds long. Appropriately, this event was known as 5 Second Day. One year, 2014 to be exact, one of the animators produced a piece featuring an excitable feline crime-fighter, a laid-back bear cyborg, and the world’s cutest bat. The rest, as they say, is history.

“I had been asked to pitch a show and I had been putting an idea together, but I wasn't sure if it had any legs,” says Parker Simmons, the creator of the unlikely crime-fighting trio. “Fortunately for me, 5 Second Day was a full license to experiment and I thought, ‘Well, maybe I can put something together super-quick and see if these characters play?’ So I grabbed my pals Grif [Kimmins] and Lika [Leong] to help do voices, enlisted Doug Vito (our now series animatic editor) to help edit it down, and animated a brief skit with help from (now series board revisionist) Brian Pak. It got a lot of laughs and some big ‘awwws.’ People reacting so positively to these characters they knew nothing about just a minute-and-a-half before was all the proof I needed that this idea was worth pursuing.”

“It got a great response from the audience and the characters were crystal clear,” Titmouse president and founder Chris Prynoski adds. He recognized that Mao Mao was special as soon as he saw it. “The main cast were people who worked at Titmouse and the characters are loosely (some not so loosely) based on them. They feel real because they are real!”

Simmons pitched Prynoski on a long-form short featuring the characters and Prynoski found the budget and schedule to make it happen. That seven-minute short was in turn used as a pitch to Cartoon Network and, a few years later, on July 1, 2019, Mao Mao: Heroes of Pure Heart debuted as a full-fledged series. The show has been nominated for an Annie Award in the category of Best Production Design – TV/Media, joining five other Titmouse productions in this year’s nominations. Set in the bucolic town of Pure Heart Valley, Mao Mao: Heroes of Pure Heart follows the adventures of Sheriff Mao Mao, his sidekick Badgerclops (transformed from a polar bear into a badger for the series), and the aptly named Adorabat as they strive to protect the citizens of Pure Heart Valley from the multifarious forces of evil. The immense cast of characters includes a colorful (literally and figuratively) crew of canines, rodents, reptiles, amphibians, and others, many of them voiced by Simmons, Kimmins, and Leong.

It takes about 40 weeks for a unit to produce an episode, according to executive producer and Titmouse COO Ben Kalina, with four to five months devoted to pre-production and two to post. With several units working simultaneously, the total schedule for the project was 95 weeks. At the peak, Titmouse had around 55 people working on Mao Mao, supported by the animation team at Malaysia’s Inspidea.

“Our biggest challenge is always the schedule,” Simmons shared. “We strive at every level to push the quality of production design and animation to the highest possible standard, but working in TV means you've got to get the product out the door on time. That means picking and choosing the battles that are most worth fighting. So we carefully decide which shots need more love, which backgrounds get cut, etc., all in service of making the show look great. There's always a little heartbreak in cutting a particular design, or letting a retake go, but it's all worth it in the end.” On the other hand, Simmons pointed out, the fact that the animation is being done in Adobe Animate means that he can personally open up any scene and revise it himself. “It offers me and the retake artists a greater degree of control over the final product,” he explained. “I personally did 50+ animation retakes on a single episode before.”

Asked for final thoughts on the show’s development and what makes it special to him, Simmons said that in a significant way it was a journey of discovery. “My biggest inspirations were my personal experiences with family and friends, as well as video games and shows I loved as a child. But what allowed Mao Mao to become a fully realized character happened subconsciously – it wasn't until years into development that I realized he was 90% me. Once I leaned into that, everything fell into place.”

“On the surface you could say that it's an action show about friendship starring lovable animal characters, but the truth is that the show is about identity,” he continued. “Mao Mao is projecting an identity he thinks will bring him the love of his family. Badgerclops, his best friend, is resisting any identity that his friends or family would push on him. Call him a hero? He'll act like a villain. Say he's a bad guy? He'll save the day in an instant. And their little sidekick Adorabat is just starting her journey of self-discovery, and has latched onto the first identity that seems preferable to the humdrummery of her boring life. But she's still very young and will have to learn that there are millions of ways to be yourself without just emulating someone you idolize. It's this theme of identity, along with the nuances of family, trauma and reconciliation that make this show such a rich source of creativity and fulfillment.” Apropos of which, Prynoski emphasized that the studio would love to see more internally generated successes like Mao Mao. And, for a peek at what these might look like, he encourages people to attend one of this year’s 5 Second Night public screenings in Los Angeles, New York, or Vancouver. “It’s 100% uncensored and I don’t watch the films ahead of time,” he said. “I’m just as surprised as anyone else when I see what ends up on the screen!”

See below for more information on Titmouse’s 5 Second Night screenings, which are open to the public.

Los Angeles 2/28 (Chris Prynoski will do the on-stage intro)
http://americancinemathequecalendar.com/content/titmouse-5-second-animation-night-2 Z is for Zagreb: The Animafest Zagreb Exhbition 1972-2022
Dude! - ‘Rise of the Teenage Mutant Ninja Turtles: The Movie’ Arrives
‘Super Giant Robot Brothers’: A Milestone in Virtual Animation Production
‘Luck’ Aims to Bring Hope to Kids In and Out of Foster Care
Pre, Tech, and Post: The Many ‘Vizings’ of ‘Chip ‘n Dale: Rescue Rangers’
Hammering Out the VFX in ‘Thor: Love and Thunder’
‘DC League of Super-Pets’: A Family Film Produced by a Family
‘Light & Magic’: ILM’s Story of Family, Fun, and Pioneering Visual Effects
END_OF_DOCUMENT_TOKEN_TO_BE_REPLACED