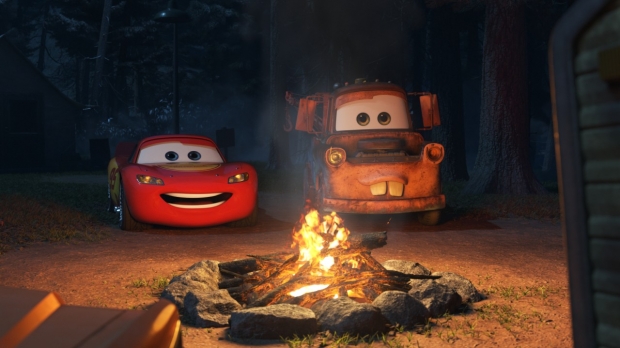 From getting their kicks on Route 66 to racing in Japan and Europe, Pixar’s Cars characters have had their fair share of adventures in a 16-year-old franchise that includes three films, four short films, and now two animated series with the arrival of the all-new Cars on the Road. In this addition to the Cars universe, fan favorite hot-wheeled characters hit the pavement once again, but this time for a good, old fashioned road trip… with just the tiniest little taste of danger.

Debuting on Disney+ today, September 8, Cars on the Road follows Lightning McQueen (Owen Wilson) and his best friend Mater (Larry the Cable Guy) as they head east from Radiator Springs on a cross-country road trip to meet up with Mater’s sister for her wedding. Along the way, every stop is its own adventure, with outrageous roadside attractions and colorful new characters, from roaring dino trucks and ghost cars to coupe clowns and Mad Max type racing monster trucks.

“Once we had the framework of knowing where we were going, it was about how we make it as entertaining and as unexpected as we can imagine,” says Steve Purcell, writer for Cars on the Road who is also directing the series with Brian Fee and Bobby Podesta. “It's like trying to crack ourselves up in a way, looking at the fun places that are an exaggeration of real roadside attractions you might encounter on a real road trip.” All three directors have been with the Cars characters since the beginning, serving as storyboard artists for the first film, and some of the new series features ideas they’ve had stashed away since the journey began in 2006.

“The Salt Fever episode has some specialty kinds of racecars that you'd see at the Bonneville Salt Flats,” says Fee. “That was an idea that was always in our back pockets from back working on the films that never made its way into the movies. So that was fun to be able to finally bring those characters to life.”

The team was also eager to dive into new territory with McQueen and Mater’s friendship, a core tenet of the fabled franchise.

“McQueen and Mater haven’t spent this much time together continuously in any of our stories,” explains Purcell. “And, some of the time, they don’t always get along. We have them arguing sometimes and I think we get to see new aspects of their personalities because of that. We get to see McQueen being a know-it-all, but then getting brought low in the haunted house by forcing them to have to stay in that place that Mater didn’t want to stay in. So we get to try some different things and see aspects of them that we didn’t get to see before.”

The dynamics between characters and their personalities is also what dictated where the team had Mater and McQueen stop in their ever-increasingly epic journey.

Purcell adds, “These stops are meant to be situations where we get to put the personalities of our beloved characters through the ringer, because McQueen and Mater are very different characters,” says Purcell. “So, we get to see how they react in all these different situations.” But the creators also instilled their own road trip fantasies into the film, working with composer Jake Monaco to turn something as mundane as a truck stop episode into a full-fledged music video.

“We took these different places and infused a lot of different parts of ourselves into them in different aspects,” says Podesta. “If we visited a truck stop and it busted out in song, this is the type of song I'd want it to burst out with. That was a lot of fun to do. Like any good artist, you peel off pieces of yourself you put it on a canvas and you use it.”

He adds, “Music has been part of the Cars world going back to the first film.  It's kind of an integral part of it. And we wanted music to be part of this as well. For Trucks, it all started with Steve writing a musical episode about Mater at this fever dream truck stop and what would happen there.”

Purcell also used his memory of moving across country, from Ohio to San Francisco, with his family when he was younger to brainstorm the bizarre roadside attractions depicted in the new series.

“There’s always ‘The World’s Largest…’ this or ‘The Biggest Ball of Twine,’ or all these kinds of things that promise some spectacle that you're going to see,” says Purcell. “When I was a kid, I was always begging my dad to stop at these places. And he rarely would. Out of the blue, once in a while, he'd stop at one. But it's the potential of something extraordinary that attracts you. And so, in our show, we get to make them as nutty and as extraordinary as we want to.” Next to the thrill of giving life to their wildest road trip imaginings, the Cars on the Road crew says the next greatest thing was getting to brainstorm looks for new characters, building from the bones of traditional car models to invent vehicles as charismatic in personality as they are in their looks.

“I've always enjoyed and loved cars,” says Marc Sondheimer, who serves as producer on the series, known for producing Pixar shorts from Piper and Dante’s Lunch to Auntie Edna and Lamp Life. “I was a valet parker for a lot of years. And when you valet cars, you get to know every single make and model. You can tell from how the door shuts what kind of car that is. I’m definitely a car fan and it was fun to think of characters like Mater's sister and what she was actually going to look like and what her personality would be.”

Podesta adds, “I know bupkis about cars and how they work and how they do things. What I've always loved from the get-go is the idea of them as characters. We all have our car and it kind of reflects you. It's almost like it has personality. And I love that idea of all these characters having as many personalities as there are personalities in the world, and how they can reflect the world back. I just love the premise of that.” For Purcell, it all harkens back to McQueen and Mater’s friendship and that, despite all the hazards and bumps along the way, they’d still ride (or race) side by side on the highway of life.

“We’re trying to reinforce the friendship between these characters,” says Purcell. “That's what we love about working with them and telling stories about them. We’ve loved Mater and McQueen's relationship since the first movie and we wanted to send them on a trip that reinforced that and, even though the trip is challenging and maybe overwhelming at times, ultimately it was all worth doing.”