Carl and Dug Return: ‘Up’s Beloved Canine Gets His Own Miniseries 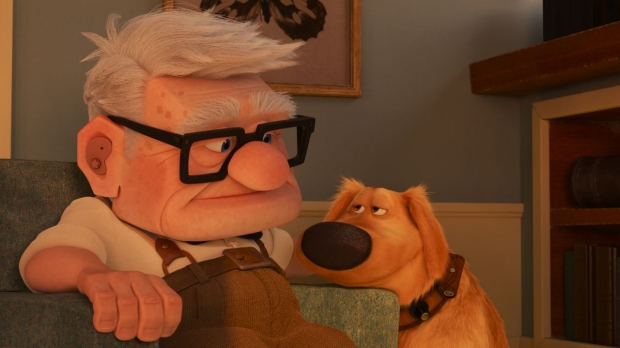 Disproving the conventional wisdom that you can’t teach an old dog new tricks, Pixar Animation Studios’ Dug Days presents the beloved canine character from its Oscar-winning 2009 feature Up in a new series of comedic misadventures. Produced by Kim Collins and written and directed by Bob Peterson (the voice of Dug then and now), the program of five shorts, which premiered September 1 on Disney+, also features the late Ed Asner in one of his last performances, reprising his role as the curmudgeonly Carl Fredricksen.

The action in Dug Days kicks off shortly after the conclusion of the feature. Carl and Dug have just returned from their big adventure and are living in a new house in the suburbs – which, for Dug, who grew up in the natural wonderland of Paradise Falls, is an exotic paradise. Whether it’s coming face-to-face with an actual squirrel, babysitting a litter of puppies, or encountering a brand new smell, Dug’s days are filled with the excitement of discovery (even if things can get a little out of hand sometimes).

For Peterson and Collins, the experience of making Dug Days didn’t have quite the frisson of facing off against a squirrel for the first time, but, like many adventures in animation, it had its share of challenges. However, for Peterson, who was a screenwriter and co-director on Up, the initial decision to do the series was an easy one.

“Up was my favorite project and I just was missing these characters,” he says. “I fell in love with them, and performing with Ed Asner as Carl was just such a great experience. Then, when Disney+ came online, we realized we could do a series of shorts instead of just one short or one feature. And so I pitched the idea of doing a series of shorts with Dug as the main character, a little mini-sequel, which doesn't impinge on the ability to do a bigger sequel later.

I thought it would put a smile on people's faces to have Dug back.” Not that he necessarily imagined it would be simple. As far as the writing went, Peterson’s key objective was for the shorts to be fun (hence the squirrels and puppies), although, as he wrote the episodes, he began to realize that each of them had a theme, such as territoriality, nurturing, and fear.

“If you do it right,” Peterson observes, “you start with something that you’d just like to see. This is true with our features, too. Then, as you bend it in different ways, other elements come forward. So while I didn’t start with facets of dog behavior, it landed there in the end.”

Peterson adds that, being a dog guy, it wasn’t like he had to do a lot of research to come up with recognizable aspects of dog behavior. “I love to be with my dogs,” he says. “Like a caveman and his wolf. Really, I just thought about my own puppies.”

More problematic was the fact that since 2009, when Up was released, technology had changed a lot. Whereas it was easy to slide from 2019’s Toy Story 4 to Forky Asks a Question, a series of shorts featuring a character from the film made the same year, making the jump to Dug Days required some heavy lifting. Collins adds, “There's the expectation that these characters will look like they did in Up, but, with current technology, we were a little worried that they would end up looking too good. We needed to find that balance where they would work with the systems of today and look the best that they can, but also still be what you remember from Up.”

“A lot of the acting, a lot of the performance, also had to be recreated,” Collins explains. “The animation leadership team spent a lot of time doing tests and making sure that we weren’t, say, changing how Carl walks. And especially with Dug, there are certain expectations of how he runs, how he does everything. And so you don't want to have to build it from scratch, but, at the same time, it's kind of all you can do because of the different technology.”

The most important thing, Peterson emphasizes, was to maintain the “sweet, caring relationship” between Carl and Dug. On the other hand, though, as Up’s director Pete Docter kept reminding them, they couldn’t make Carl too nice.

“He told us, he's still gotta be cranky,” Peterson laughs. “You know, he's been through this adventure, but he's still going to be him. And I think that's one thing you really love about Carl – he has this crusty exterior, but he loves his dog. And so we wanted to make sure that their relationship came through, to see where it went and where it ended up being again.” Asked in conclusion if his association with Dug – especially now that Dug was poised to become a major celebrity again – had led to things like his being recognized in public places, Peterson said that it rarely happened. However, he recalled, there was one time when something like the opposite occurred.

“I was at Disneyland with my kids a while ago,” he related, “and there was a guy wearing a Dug T-shirt. And my kids said, tell the guy you're the voice. And I was, like, no. And they said, come on, really, tell him. So finally I told the guy and he looked at me, like, who is this guy, and started pushing his kid so they could get away from me. And then he got on his phone and was checking – he must have looked up voice of Dug – and he finally figured it out. So at that point I said to him, you probably don’t even know who Dug is. It's like UCLA shirts in Japan – they have no idea that it's a school. I think his kids had bought it for him.”

‘The Legend of Vox Machina’: A Dream Project Made by Loyal Fans and Long-Time Friends
A One-Eyed Weasel and a Couple of Possums Walk into a Dino Den…
Method Studios Walks Us Through History for ‘Eternals’ End Credits
‘Dune’: The Inner Workings of Ornithopters, Sand Worms, and Creative Moviemaking
Re-VIEW: ‘Encanto’ - Seeking Beauty in Truth
WetaFX Delivers a Monstrous 3rd Act for ‘Shang-Chi and the Legend of the Ten Rings’
‘The Spine of Night’: Redefining Fantasy and Animated Filmmaking
Plague Diversions: Gazing at the Shortlist for the Best Animated Short Oscar
END_OF_DOCUMENT_TOKEN_TO_BE_REPLACED