The Buzz on the Big Ideas in Pixar’s ‘Lightyear’ 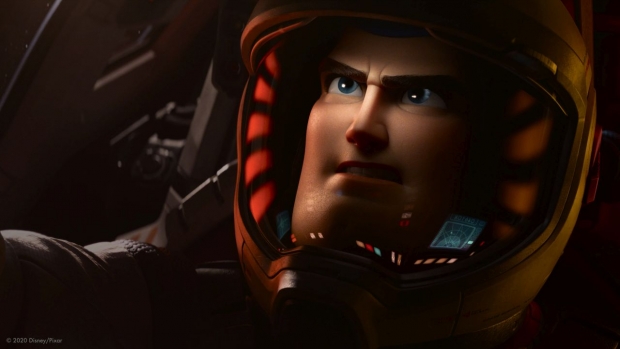 Before there was Buzz Lightyear the toy, there was, it stands to reason, Buzz Lightyear the adventure hero, who served as the inspirational model for the Toy Story action figure. And, as you might have heard by now, on June 17, Walt Disney Pictures and Pixar Animation Studios will release Lightyear, the definitive origin story of the legendary Space Ranger of Toy Story fame.

Featuring Chris Evans as the redoubtable title character, Lightyear follows Buzz on an intergalactic adventure to infinity and beyond, alongside a group of ambitious recruits (voiced by Keke Palmer, Dale Soules, and Taika Waititi), and his robot companion Sox (voiced by Pete Sohn). The film is directed by veteran Pixar animator Angus MacLane, who co-directed Finding Dory, and produced by veteran Pixar producer Galyn Susman, whose credits include Toy Story 4.

As one example of just how highly anticipated the movie is among the franchise’s considerable fan base (as well as how ready people always are to seize on misinformation), when it was revealed back in October that Chris Evans would be “replacing” Tim Allen as the voice of Buzz Lightyear, social media went kind of nuts. Accusations flew that Allen, who’s known for his conservative politics and contrarian positions, was being cancelled. And although MacLane was quick to explain that (1) the movie was about the “real” Buzz Lightyear, as opposed to the toy version, so it was really a different character, and (2) Evans had always been his first choice for the role, it took a while for the brouhaha to die down.

Looking back on it now, MacLane is philosophical.

“The pressure that I was putting on myself to just produce this movie and make it what I wanted it to be was already so great that the other stuff – the fan reaction – was hard to parse,” he recalls. “I also don't think I really understood the nostalgia aspect of it, which is probably a good thing. Galyn and I were both coming at it from having worked in the Toy Story universe, and working with the character we were familiar with, and porting it to a separate adventure. And thinking about the enormity of what the impact could be narratively, there were plenty of other things to worry about.”

“It also made clear that everybody's going to have their own idea of what this movie should be,” adds Susman. “And we can't make a film trying to listen to everybody else's idea. We can only do our best to make what we think is an interesting and compelling film, so that everybody, even if it doesn't exactly conform to their idea of what the movie should be, will enjoy it and be happy they've seen it.”

As for just how Lightyear came to be, MacLane says that there were two movies that changed his life – Star Wars and Toy Story.

“After I saw Star Wars in the theater, all I wanted to do was play Star Wars,” he relates. “All I wanted to draw was Star Wars. Star Wars was my religion. And that lasted quite a while. Then, in 1995, I saw Toy Story. Of course, in Toy Story, Andy had a birthday party, and his favorite gift was a character that he loved, Buzz Lightyear, the Space Ranger. And I always wondered, what was the movie that Buzz was from? And why couldn't we just make that movie? So, that's what we did.”

Not that it was that simple, of course. In addition to having to create a compelling narrative and nail down the themes of the story, MacLane discovered that, despite having worked with Buzz Lightyear for the better part of two decades, he still wasn’t sure exactly who the character was.

“It wasn't until the development of this project that I was able to finally isolate what the unifying character trait was for everyone's favorite Space Ranger,” he shares. “Buzz Lightyear, as I discovered, is a character at odds with his surroundings. Or to put it another way, Buzz always has a disagreement over the nature of reality. In Toy Story, Buzz thinks he's a Space Ranger. Woody disagrees. In Toy Story 2, Buzz thinks he's the Buzz Lightyear. The other Buzz Lightyear disagrees. In the shorts, he had some other problems.”

Having defined what he felt was Buzz's core trait, MacLane still needed to find a “universal truth” in which to ground the story. Appropriately enough, although he couldn’t have foreseen the temporal dislocation of the pandemic that would come to characterize the past couple of years, he chose the concept of time – which, not entirely coincidentally, is also a key factor in the production of animated features.

“Our films are very time-consuming to produce,” MacLane elaborates. “Lightyear took five and a half years. And when you finish one of these movies and you come up for air, the world outside is a little different than you remember. For example, over the years, I would return to my hometown of Portland, Oregon, and I saw it change from a city with a small-town feel and a vibrant artistic community into an overcrowded tourist destination fueled by the tech industry boom.”

He continues, “They say you can't live in the past, but what if you could? We all wonder what it would be like to go back in time, but instead, we're jumping forward in time. So that's the truth I wanted to build for Lightyear. Nostalgia for the past, while traveling rapidly through time. Lightyear is a fish-out-of-water story – a Rip Van Winkle trapped in a future he doesn't recognize, trying desperately to get back to the past, to correct a mistake of his youth. A hero out of his own time.”

Which, interestingly, brings us back to Chris Evans. Now that they knew who Buzz was, it was essential to find the right person to play him.

“He needed to have a nice, rich sound, able to be both dramatic and comedic, and, most importantly, he needed to be heroic without coming off as arrogant or dense,” says Susman. “That's a tall order, and we immediately knew we had to ask Chris. What we didn't know is that he is a huge animation fan, and that he would bring passion to the project, as well as his myriad acting talents.”

“Chris was really the first choice,” affirms MacLane, “because he just seemed so right for it. It didn't take very long, just listening to his voice, to imagine that this is what Buzz sounds like. And he absolutely influenced the development of the character. We brought Chris on early – well over a year before any of the other cast members – so that we could really work out who Buzz was, what his arc needed to be, how he was going to grow.”

Overall, MacLane and Susman estimate that it took three or four years to nail down Lightyear’s story, with its complex interplay between past and future. It was, MacLane says, an extended process, marked by trial and error, in which the pieces of the narrative slowly came together to form a coherent whole. In this effort, they were aided immeasurably by a series of screenings, as well as by Pixar’s singular creative community.

“The great thing about test screening something at Pixar,” Susman emphasizes, “is they're not shy about letting you know if it doesn't work.”