Director Eiichiro Hasumi discusses producing his first animated project, and how a career spent outside animation helped him bring realism and drama to Capcom and Netflix’s new animated series, which premieres today. 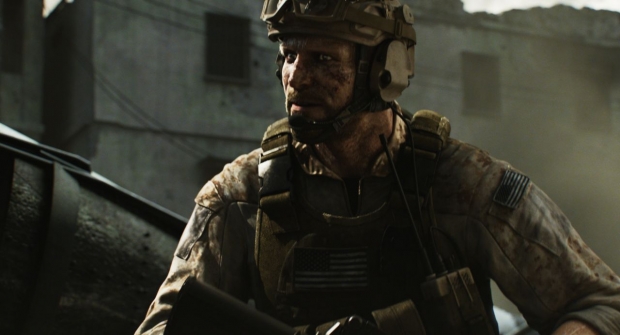 The video game series, developed by Capcom and created by Shinji Mikami and Tokuro Fujiwara, is regarded as the gold standard of survival horror games, with over 110 million units shipped worldwide across 140 different titles on consoles, phone apps, and other platforms. Resident Evil, not surprisingly, spawned successful expansions into a live-action film series, animated films, television, comic books, novels, audio dramas, and more. To this day, Resident Evil is considered the highest-grossing franchise in the horror and zombie genres.

And this latest franchise effort provides audiences with yet another fast-paced and harrowing adventure.

The story begins in the year 2000, as a helicopter falls from the sky in Penamstan during the country’s civil war. U.S. Army “Mad Dogs” ignore orders to stand their ground, instead moving to rescue the special forces survivors. Forced to escape in order to survive after seeing their comrades were already annihilated, the Mad Dogs - led by a man named Jason - claim they saw something unimaginably horrific, where men moved in mysterious ways.

Fast forward to 2006, when a hacking incident occurs on a top-secret White House file, and four agents - including well-known character Leon S. Kennedy and the “Hero of Penamstan,” Jason - are tasked to investigate. However, when the lights suddenly go out at the White House, the team is forced to take down a horde of mysterious zombies. Kennedy later crosses paths with acquaintance Claire Redfield, previously in Penamstan providing support for refugees; the two begin to worry about another outbreak, and that the recent events at the White House and the stories from Penamstan’s civil war could be connected. When a new project idea comes along for the next chapter in the already extremely successful Resident Evil franchise, crafting it into something that makes fans drool is bound to be challenging. But RESIDENT EVIL: Infinite Darkness director Eiichiro Hasumi says he felt more joy than pressure being part of such a historically important series and fanbase.

We recently spoke with the critically-acclaimed live-action filmmaker about the project, which marked his first experience working in animation, and how he used live-action techniques to elevate the drama and make these characters - and horrors - even more real.

Victoria Davis: Had you been a big fan of the Resident Evil games prior to getting involved with this project?

Eiichiro Hasumi: Actually, I don't play games that much. But obviously it's a major title and we're celebrating its 25th anniversary this year so it has a long history. When it came out, I remember all my friends were really excited to play it.

VD: Was that long, infamous history a big part of your decision to take on this project and get involved with developing the series adaptation?

EH: The Resident Evil franchise has spawned many live-action films and a couple animation films as well. So, I didn't think that they would approach me to direct RESIDENT EVIL: Infinite Darkness, but that's what happened. VD: There have been many attempts in the last few years to translate other games into feature films and television series, with mostly mixed reviews and not much success. But Resident Evil seems to really thrive both as live-action and animated films. What do sets the story up for success as a CG animated series?

EH: Having been involved with a full CG project for the first time, I have to say one of the big components is Hiroyuki Kobayashi. He’s from Capcom, he's worked on the original games, and, above all, he puts importance on making sure that the fans are happy, and a part of that is keeping the characters right for the fans. So, he has these ideas of how Leon should present himself and because he sticks to that, whatever genre it is, the fans can recognize Leon from the game as Leon in an animated series like this one.

VD: In addition to the amazing work producer Kobayashi has done, do you think the characters, like Leon, are really where the heart of the story's success comes from?

EH: Well, of course, the characters come first. But also, a big component is the timeline. Everything is so canon and there is a complete timeline that they stick to. Like in this case, when we tried to figure out when to base the story, we came up with 2006 because that was the year within the Resident Evil timeline where nothing yet had been made as a story. But when I was deciding whether to specifically put this story in the spring or fall, I was asked not to specify that, because in future games, they might want to use one of those seasons. That's how much they stick to the cannon and the timeline. VD: That kind of attention to detail leads me into my next question. The animation is so detailed and fluid, and specific to Resident Evil, where it’s really gritty and bloody but draws you in as a viewer. That said though, how did you go about making sure that the CG scenes, just like the game, didn't look like a bunch of cutscenes strung together, and stood on their own as a unique series?

EH: Even though it was my first CG animation attempt, I really approached it as I do with all my live-action feature films. And I have to say characters like Leon really help the scenes feel alive. So, I would sort of create the human drama around that character and the action came naturally. I wasn't that conscious of this being based on the game. That might also have helped.

VD: So not focusing too much on the game’s style helped in not limiting the way you approached the animation?

EH: Yes, I would say so. And I must commend everyone on the animation staff because they were incredible. Other than those working on the action sections, it was the first time I’d worked with many of them. VD: This animation is heavily based in realism with a ton of detail. What were some of the biggest challenges you faced on this production, and, especially coming from a live-action background, how did this series help you grow as a filmmaker and storyteller?

EH: It might be a small detail, but I had some challenges when I was editing the mocap direction. It is pretty close to directing live-action in regard to communicating with the actors, but when it came to editing with animation, you have to start with rough animation. Sometimes you don't have facial expressions at all. And that never happens in live-action. With animation, they start with deciding on how long each cut shot is going to be and then make sure the performance works within those timeframes, which is not the way you edit it in live-action. With live-action you look at the performance, you look at the pause between those performances, and that becomes where you edit.

So, I had asked the crew to have a drawing or a still capture of the facial expressions alongside the actual animation that didn’t have those faces yet to help me imagine what the expressions would look like. I brought a lot of the way I work in live-action into making this series, and because of all the wonderful people I've met who I think could also work on live-action films, I hope to work together with them to create something a little more hybrid in the future. VD: Like you said, this is the first CG animation you’ve worked on and it's also the 25th anniversary celebration of Resident Evil, so there are a lot of reasons to be excited for the release. What are you most looking forward to with the premiere and what are you looking forward to people, especially long-time fans, taking away from this series?

EH: The Resident Evil franchise really has always thought about the fans. And of course, it has a lot of fans who are really looking forward to anything that comes out from their franchise. So, I hope it meets their expectations and that they enjoy it. It's a long series that's been going on for over two decades, but it's always cultivated new fans along the way as well. So, I hope this series will also serve that purpose, especially as it's going to be released in many countries at the same time through Netflix, which is probably a first for any Resident Evil property.

I just hope that, for those who discover their love for Resident Evil through this series and those existing fans, they all enjoy it alike.