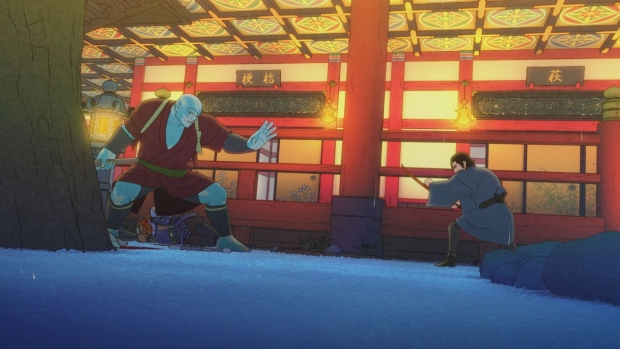 While Bright’s Daryl Ward (Will Smith) is a rough-edged cop in a modern-day world where humans live alongside orcs, fairies, elves, and other magical creatures, Bright: Samurai Soul’s Izou is a one-eyed, emotionally hardened samurai who has lost both his master and will to live, and now works as a bodyguard at a Kyoto brothel. Also living among many fantastical beings, the ronin is shaken from his melancholy existence when he suddenly finds himself the protector of a fiery elf child named Sonya, who is brought to the brothel and secretly entrusted with a wand that harbors immense power.

“To be honest, I hadn't seen the original film before I got this assignment,” explains Ishiguro, who was approached to helm the reimagined film by Netflix. “But when I saw it, I became a fan. I have great respect for the original and the message that the ‘bright’ ability is a very special one.” Though the plots of both films center around the power of the “brights,” unique individuals with the ability to wield a wand that can create miraculous life or generate horrific death and destruction, the beating heart of these films is the exploration of self and the power that resides within us all.

The original film’s conceptual approach employed a dive into racism, forcing Smith and Joel Edgerton’s human and orc characters on a journey of learning to trust those who have been deemed untrustworthy by society. In Bright: Samurai Soul, the stains of segregation are still present as Izou journeys with Sonya and a former thug orc Raiden, searching for redemption from a life of thievery, to protect the wand from elitist elves who aim to revive the Dark Lord. But the anime’s themes are much more rooted in loyalty and unpacking what it means to betray a master for the sake of being true and loyal to oneself.

“I had a lot of creative freedom and my own creative ability and power in this spinoff version,” notes Ishiguro. “The theme of loyalty and loyalty for the master is a unique aspect of the Samurai or Feudal culture in Japan. But in this film, it’s not only about loyalty to the master, but also a character’s loyalty to himself or herself. Because this character, as well as other characters, is betrayed throughout the story. And how they behave when something like that happens is very important to the bigger message of what it means to be a ‘bright.’”

And it was Ishiguro’s belief in Japanese culture’s ability to further enhance the original film’s message that led the director to his chosen animation style: fusing Japanese woodblock print art with 3DCG technology.

“I’ve been more and more inspired recently by Japanese culture and this woodblock print art,” says the director, also known for helming the water-colored, story-book-styled anime Children of the Whales. “I don't want to depict a West versus East dichotomy. But with this being broadcast on Netflix, I wanted the chance to depict the unique Japanese culture to an international audience.” From the film’s red-light districts to green and orange-leafed forests, Bright: Samurai Soul’s art features incredible details and textures, with a pop-up book atmosphere that makes characters feel like they’re jumping right out of a manga’s pages. The effect is driven home by 360-video cinematography that takes viewers on a full tour of a room during action sequences. Despite intensely dark themes and bloody gore, the film still captures the samurai’s fighting artistry amidst the violence.

“All the action in the original was very attractive,” says Ishiguro. “And I kept this concept from the original in the animation version.” Trading gunfights for swordplay, the soul of the samurai, even in the animation design, remains unchanged; movement in action scenes highlights the artistic flow of a samurai’s slick and stylized combat.

Along with showcasing Bright’s message relevance within Japanese culture and Meiji-period settings, Ishiguro also hopes Bright: Samurai Soul pays homage to the original live-action film by both the Easter eggs he’s planted throughout and by the human, orc, and elf trio that he says was one of the successful concepts he really didn’t want to change.

And each one has the chance to discover their inner samurai soul. “I had the chance to interact a lot with Netflix staff members who were involved in the production of the original version, and they gave me the endorsement and told me that I can use my free imagination in coming up with the animation version,” he explains. “But the trio pattern is a winning pattern for these stories. One is a very macho and strong guy, another is a guy who is a little more sensitive and has a certain past, and then there is Sonia, who is very vulnerable and the person to be protected. But she’s also the one who has the strongest ability. There’s a lot of diversity between the three of them and that creates a successful story.”

While a live-action Bright sequel is currently in the works at Netflix, nothing has been confirmed regarding a sequel to Ishiguro’s reimagined animated version. Though the director says he’d be game to create even more Bright stories based in Japan’s history, right now he’s just focused on highlighting the best of the original Bright film with this anime.

“Ultimately,” he says, “I hope that the original version and spin-off version can lift each other up.”

The Massive Creative Fellowship Behind ‘The Lord of the Rings: The Rings of Power’
‘The Dragon Prince’ Director Villads Spangsberg Talks Toonlines and Tough Challenges
Laurence Fishburne and Steve Loter Talk ‘Marvel’s Moon Girl and Devil Dinosaur’
Taking an Old-School VFX Approach in ‘All Quiet on the Western Front’
‘Natural Habitat Shorts’: Like ‘Ranger Rick,’ But for Adults
Framestore Sets Sail on ‘1899’ with New Virtual Production Tools
VFX is the ‘Thing’ for Tom Turnbull on Tim Burton’s ‘Wednesday’
We Need to Chat
END_OF_DOCUMENT_TOKEN_TO_BE_REPLACED