‘Breaking the Glass Frame’: Women in the Spotlight at USC Symposium 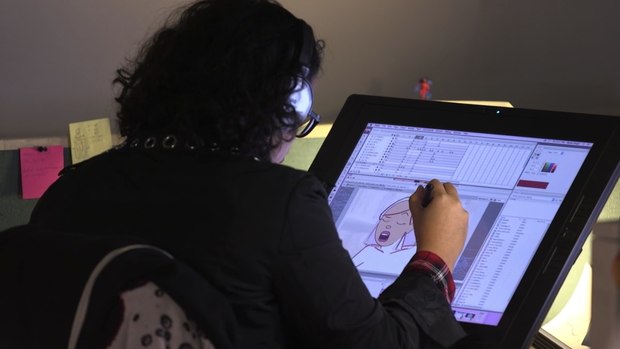 Sakari Singh, a storyboard artist with Titmouse Animation, shares her experience from college to career in the short documentary film ‘The Women of Titmouse Animation: The Inbetweens of Education, Employment & Everyday Life.’

This weekend’s Breaking the Glass Frame: Women and Animation, Past, Present, Future symposium, set to take place at USC’s School of Cinematic Arts October 5-7, promises a full program of talks, panels and presentations designed to spotlight female contributions to the field of animation and explore solutions to sexual harassment, bias, and lack of diversity that challenge working women within the industry and academia.

The three-day symposium, presented by the University of Southern California in partnership with UCLA, CalArts & Women in Animation, comes amid turmoil -- within the industry and elsewhere -- exemplified by the burgeoning #MeToo movement that has seen the not just the downfall of Hollywood mogul Harvey Weinstein but also the dismissal of Pixar chief creative officer and animation legend John Lasseter. “Breaking the Glass Frame is shaping up to be a formidable event which promises to not only bring to light the obstacles women and the LGBTQ+ community face, but also to serve as a catalyst for change and provide an environment for women and the LGBTQ population to network and develop strategies to diversify and transform the animation industry,” Sheila M. Sofian, Professor at the John C. Hench Division of Animation and Digital Art at the USC School of Cinematic Arts, and one of the event organizers, comments.

“The topic and timing of Breaking the Glass Frame resonated with me,” Sofian continues. “The topic of women in the animation industry has historically been neglected. Our female students have often faced barriers and unexpected difficulties once they left academia and began working in the industry. This is a topic ripe for investigation, in terms of the representation of women and the LGBTQ community both on and off screen in animation and the obstacles confronted by women and LGBTQ people in the workplace.”

Gathering a diverse and energetic mix of professionals from all areas of the industry, Breaking the Glass Frame kicks off Friday night with a special screening of animated shorts from USC, UCLA and CalArts alumni curated by Sofian alongside Maija Burnett, Director of the CalArts Character Animation Program; Maureen Furniss, Director of the CalArts Experimental Animation Program; Lisa Mann, Associate Professor of Practice of Cinematic Arts at USC; and Celia Mercer, Chair of the UCLA Animation Workshop.

“This is the first collaborative event between three of the world’s most prestigious animation programs: USC’s John C. Hench Division of Animation & Digital Arts, the UCLA School of Theater Film and Television’s Animation Workshop, and CalArts’ Character and Experimental Animation Programs,” Mann, also one of the organizers of the event, notes. “We hope this gathering of incredible women will inspire the next generation to break through the glass frame.”

Adds Furniss: “With all the media coverage of women’s issues right now, it’s easy to presume that change is on the way. It will take a total shift in the culture, after sustained effort, to see any lasting effects. This event brings focus to important issues and provides a sense of solidarity among women at all levels: executives, established artists, and students eager to join the animation world.” “Animation, much like all of the entertainment industry (and the world for that matter) is experiencing a momentous shift in equality and unity -- not just for women, but for all marginalized groups,” says McCann. “We need to continue to speak up about transgressions against these groups so we can break the pattern. Learning from our past, while celebrating the strides we’ve made in regards to diversity, is ultimately how we can change for the better. There is still a great deal of work to be done, but we’ve already taken some first steps to get there.”

The “Pushing for Diversity and Inclusion in Animation: Race, Gender Identity, Sexual Orientation, Disability, and Age” panel aims to address this very topic, examining bias and discrimination taking place in the animation industry, along with strategies for change. Moderated by Women in Animation vice president and Warner Animation Group producer Jinko Gotoh (LEGO Movie 2), the panel will draw on personal experience to discuss issues such as the lack of diversity in the workplace as well as harassment related to race, gender, sexual orientation and age.

“There’s never been a better time for women to break through and take their rightful place at the forefront of animation,” Gotoh observes. “Numbers show that women make up over 65 percent of the students studying animation today. We need to make sure nothing stands in the way of bringing their unique and diverse voices to our characters and storytelling. We need to cultivate, to pave the way, to smash all the barriers so they become our next creative leaders.”

“We are so pleased to partner with these amazing academic institutions in such a meaningful way and continue the conversation about diversity and inclusion that we launched at the Women in Animation World Summit in Annecy last June,” adds WIA President and Breaking the Glass Frame collaborative partner Marge Dean. “We believe strongly in the next generation of artists and filmmakers and are honored to join in presenting this inspiring slate of speakers.”