The studio’s exceptional talent is recognized in 14 different categories, 20 noms in all, for nine different shows, including their latest franchise efforts with the ‘The Croods,’ ‘Trolls,’ ‘She-Ra,’ Guillermo Del Toro’s ‘Tales of Arcadia,’ and the dinosaurs of ‘Jurassic World.’ 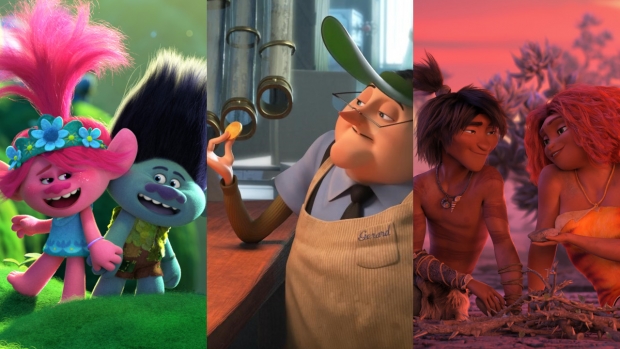 Voting for the 48th Annie Awards ends April 9 at midnight, and out of 31 award categories, DreamWorks Animation has been nominated in 14, with 20 nominations in total. On the feature side, their recent CG animated comedies, The Croods: A New Age and Trolls World Tour, are in consideration, as well as Taylor Meacham’s heartwarming CG animated short, To: Gerard.

Links to AWN’s recent coverage of five of these shows is provided below, plus an image and short summary for the sixth: the Dragons Rescue Riders special. But we’ve also provided a more extensive breakdown of the The Croods: A New Age, Trolls World Tour, and To: Gerard, spotlighting key areas of the studio’s great work. A hearty congratulations to all the nominations – and don’t miss the Annie Awards when they stream live on April 16. She-Ra and the Princesses of Power: Nominated for two Annie Awards - Best TV/Media Children and Noelle Stevenson for Best Writing TV/Media - DreamWorks Animation’s hit series may have ended its five-season Netflix run, but it’s unflinching support for lifestyle diversity, and message that love and friendship will conquer the fear of failure, will continue to positively impact audiences well into the future. Read the full article here. Dragons Rescue Riders: Hunt for the Golden Dragon: Jeff Bennett was nominated for Best Voice Acting TV/Media for his role as Erik the Wretched in this 46-minute special. In the show, Dak, Leyla and the Rescue Riders crew brace for their newest adventure when greedy pirates get their hands on a map leading to a precious Golden Dragon’s nest. The young Rescue Riders must embark on a hunt to outrun the pirates and save the dragon’s egg!

The Croods: A New Age

Seven years after The Croods was first released in theaters and the initial sequel pitch was first greenlit, The Croods: A New Age finally made its way to the big screen in 2020. Enduring three reschedules, a production halt, a production restart, and a pandemic to top it all off, director Joel Crawford and his team of effects creators, character designers, storyboard artists and Oscar-winning voice actors are getting their dues with five Annie Awards nominations.

As Eep and Guy, in their new romance, have trouble settling into the old family dynamic with Grug, Ugga, Guy, Thunk, and Gran Crood, the paleolithic pack also faces the challenge of new neighbors. The Bettermans, a family from Guy’s past, have clean clothes, showers, an abundance of food and, best of all, windows. But the newfound paradise isn’t as nice as it appears.

In The Croods: A New Age, there are even more fantastical visual effects, from giant fruit splatters and volcanic rock-n-roll battles, to exploring winged forests and spider wolf ice caves. Character animation has also lent a softer, more vibrant, and detailed look to the Croods family as they adventure in a bigger, brighter world like they’ve never seen before.

“When I approached this movie, I wanted it to feel like a celebration that the Croods are back,” said Crawford. “I wanted there to be a joy. And right now, with where the world is, having a big comedy about families who are different on their surface, but come together and realize their future is brighter together, that's what I want people to come away with. That there's a positivity in this movie. Not only that, but I also want people to laugh. Laugh with their friends, laugh with their family…that to me would be great, just to have people laugh and have fun when they watch the film.”

As one of DreamWorks Animation’s most successful franchises, the glittery and glamorous Trolls includes two feature films - Trolls and Trolls World Tour - and two TV series - Trolls: The Beat Goes On! with eight seasons and TrollsTopia with two. Plus, a television special, Trolls Holiday.

In the sequel to the 2016 musical adventure, Trolls World Tour revisits preppy pink troll Poppy and her right-hand-man Branch, who have discovered their forest is only one of six musically inspired and fiber-based Troll worlds. Each tribe is devoted to a different musical genre: funk, country, techno, classical, pop, and rock. From the underwater universe of the Troll-maidens to the quilted deserts of the western country Trolls, Poppy and Branch must tour each Trolls world to stop the Rock Trolls’ Queen Barb from demolishing all other forms of music by stealing musical strings from each of the other tribes.

Matching the first film’s Annie Awards nominations, included Outstanding Achievements in voice acting, character design, storyboarding, and production design, Trolls World Tour ups the ante with nominations for Best Feature and Best FX for Feature, which comes as no surprise considering the exciting new landscapes explored in the film as well as the story’s focus on celebrating diversity.

“We look at this as it's the collective that told this story,” says producer Gina Shay. “We listened to so many people's voices on this film. People would come and talk to us and say, ‘You know what? There's something about this character design that makes me feel a little uncomfortable,’ and then we would change it. And so, it felt right. Everybody felt like we were all holding hands together and going forward with telling the story in the most responsible way.”

The 7-minute CG short, nominated for Best Production Design and Best Editorial, tells the story of a post-office worker named Gerard who longs to fulfill his childhood dream of becoming a famous magician. Practicing with a treasured coin from The Great Vivonti, Gerard spends each day working to expand his dexterity and improve his sleight-of-hand. One day, a young girl named Jules wanders into the post office and happens upon one of Gerard’s practice sessions. As Gerard entertains the child with tricks and talents, he sets off a chain reaction, intertwining two artists separated by decades.

To: Gerard is not only a story of magic, but a love letter to director Taylor Meacham’s father, combining his love for animation and the art of illusion.

“The film also evokes my love for my father, who's been a huge inspiration in my life,” he says. “And as we have both gotten older, I’ve seen that he couldn’t really afford to follow his own dreams, despite being someone who's constantly been an advocate for me. So that's where these two ideas come together. Out came a script and that's what you get to see.”

In developing the short’s look, production designer Raymond Zibach expanded on Meacham’s desire to incorporate art deco into the location design, from the conveyer belt arrangements and metal inlays in Gerard’s postal floor to the design of the tubes that carry mail throughout the room.

“I had a bunch of random design ideas, one of which was art deco, because I wanted there to be this antique feeling to the post office,” Meacham explains. “That set the initial foundation for the set piece of the post office, but really, the design of the world.”

The deadline to cast or change Annie Awards ballots is 11:59 p.m. on Friday, April 9.

How ‘Luck’ Applies a ‘Less is More’ Approach to Comedy
Z is for Zagreb: The Animafest Zagreb Exhbition 1972-2022
Dude! - ‘Rise of the Teenage Mutant Ninja Turtles: The Movie’ Arrives
‘Super Giant Robot Brothers’: A Milestone in Virtual Animation Production
‘Luck’ Aims to Bring Hope to Kids In and Out of Foster Care
Pre, Tech, and Post: The Many ‘Vizings’ of ‘Chip ‘n Dale: Rescue Rangers’
Hammering Out the VFX in ‘Thor: Love and Thunder’
END_OF_DOCUMENT_TOKEN_TO_BE_REPLACED