Break Out the Popcorn: Features to Watch at Annecy 2022 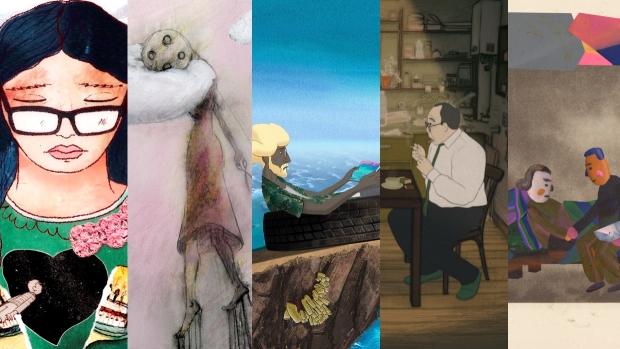 Ah, features, features... for those many animators unsatisfied with the beauty and richness and challenge of the short form, who instead crave the attention and acceptance bestowed on the “real” filmmakers. That age-old animator's insecurity mingled with a deep-seated need to be loved and admired by as many people as possible, no matter how facile the platitudes.

Okay, that’s a bit mean... Sorry about that... probably because I had almond milk in my coffee this morning. It just ain’t the same. And I don’t buy that it’s any healthier.

A racket, all of it, said a fine writer once upon a time.

It’s all starting to make sense.

Outside of barely a handful of films each year, most animated features are either crass commercial junk food unfit for narcoleptics and drooling toddlers, or faux animation films made by folks who know squat about animation. Yes, in some cases, it’s necessary (as evidenced in one of the films mentioned below). Films like Flee and The Swallows of Kabul, for instance, simply couldn’t have told their stories in live-action for assorted political, cultural, and existential reasons. Still, there are others that are really just live-action and documentary films using animation because it’s cheap.

The result is often that animation and design are an afterthought, so you sometimes get trite narratives, using common framing and editing patterns lifted from Hallmark Christmas films, and then prettying it all up with what these non-animation folks imagine is really stunning and wickedly original design and bold animation (yeah, I’m looking at you Loving Vincent. Nice try.)

This year’s feature competitors at the Annecy International Animation Festival are really not all that different. There’s a bit of sludge here and there, but there are also a handful of features that carve out stunning, original worlds and visions while clearly respecting animation as a potent art form that can take you wherever the hell it wants to, whenever it wants to. Physics, be damned!

With those cheery musings out of the system, here's a highly subjective look at some of the features worth your hungover attention. (Note: I had intended to push Alberto Vázquez’s feature, Unicorn Wars, but couldn’t get an English sub-titled version in time. It looks cool, so go see it). Here’s a rare case of someone who is really making an admirable career out of creating innovative and diverse animated features. Anca Damian, whose previous works, The Magic Mountain (2015) and Marona’s Fantastic Tale (2019) couldn’t be more different, returns with The Island (2022), which might be her best work yet.

Oh-so-loosely based on Daniel Defoe’s famous novel, “Robinson Crusoe” (1719), Damian takes the basic story of a man (with the glorious name, Robinson) adrift on an island and from there creates a magic realist lo-fi musical that fuses Luis Bunuel and Masaaki Yuasa with mermaids, refugees, and broken families.

The result is what has to be the most upbeat, wild work about pretty dour situations. Don’t ask me how Damian pulled it off. Maybe it’s the collage, the bold, beautiful colors, a work drenched in warm sea blues.

We’re never quite sure if this is all (like Crusoe) in Robinson’s head as he sits adrift on a rock drowning in sorrow and madness, recounting characters from his past as a doctor, father, son, lover...

Like Mait Laas’s Lisa Limone and Maroc Orange: A Rapid Love Story (2014), The Island is a light musical that lures us into a deeper and darker story that aptly reflects the maddening chaos of globalisation and just downright awful human behaviour. Based on an assortment of short stories by the Japanese writer, Haruki Murakami, Blind Willow, Sleeping Woman is your typical story about a giant talking frog, a lost cat, a mentally messed up accountant, and a feckless bank employee whose frustrated and constantly sleeping wife has left him. Together they seek to save Tokyo from an earthquake while trying to sort out their empty lives.

That was sarcasm, kids.

If ever there was a writer ripe for animated interpretation, it would be Murukami (who, appropriately enough given the musings above, prefers writing short stories to novels). Like an empty box to a cat, Murukami’s magic realist-tinged stories with endlessly odd characters and narrative detours are a perfect fit for animation.

One mild sticking point is the English voicing. Admittedly, only native English speakers might be put off by it, but it felt oddly disengaging to watch Japanese characters in a Japanese world when they’re voiced by Canadian actors. Yet, somehow, it also adds to the pleasant instability of the film’s world and characters. It kinda adds a whole new layer of dysfunction and discombobulation to the experience. This self-described "animentary" is comprised of three stories, each narrated by young people whose lives and families have been shattered because of harsh, illogical, and downright racist U.S. immigration policies. Each story is linked by a master of ceremonies, Lalo "El Deportee,” a spoken word poet who was deported from his home state of Utah to Mexico.

The visuals and animation won’t alter your life. In truth, the visuals offer so little that this could have just been a good podcast. That said, the structure and stories are quite potent and important. Not enough animation deals with the urgent social and political situations of today. Home is Somewhere Else is a welcome firsthand exploration of racism, intolerance, and exile, but also hope. Since about the time of Recycled and Hand Coloured # 2 (made with Thomas Sauvin), the direction and tone of Lei Lei’s work have taken a more personal direction. While his earlier films fused magic realism, sci-fi, comic books, and video games into visually stunning, hand-painted worlds, his later work has taken on a more personal focus.

Both Recycled and Hand Coloured # 2 use abandoned and discarded photographs from assorted Chinese flea markets and bring them back to life, giving new life and purpose to many unsung, probably long-dead, individuals. Later, in Books on Books (2016), Lei Lei used patterns from one of his father’s books to breathe new life into these forgotten designs and create a space where father and son come together as unexpected, impossible collaborators.

Lei Lei’s latest feature, Silver Bird and Rainbow Fish, feels like a culmination of this intimate recycling. Using a mix of collage, drawings, clay, and archival photos, Lei Lei puts on his Dr. Frankenstein suit and brings his family’s rather tumultuous past back to life in order to make some sense of where he is now.

Using interviews (that are really more like easy going conversations) with his father and grandfather (who died before the film was made), we follow the story of 4-year-old Jiaqi (Lei Lei’s father), whose mother has just died and whose father has been forced to find work in the countryside. Jiaqi and his sister are eventually put in an orphanage.  From there, Lei Lei traces his family’s history alongside the turmoil of Chinese politics. In the end, it's a story that’s not just for Lei Lei and his family, it’s a story of Chinese people. It’s also a story, despite the dominating male voices, about strong women, notably Lei Lei’s step-grandmother and mother. They are the pillars of strength and comfort in difficult moments.

True to his style, Lei Lei maintains a light, comic touch. Visually, the film is a collage of photos, drawings, and designs. It’s like a collection of misfit images given new purpose. Lei Lei has never been afraid to keep things honest. He’s never been the precious sort. One of the funniest moments is when Lei Lei has to take a break during an interview. Most artists would have just cut all this out, but Lei Lei keeps the recording going and the image freezes until he returns.

Whether it’s strangers or family, Lei Lei lovingly and playfully celebrates the marginalized, misunderstood and forgotten, resuscitating them with a new air of hope, purpose, and humanity. I can’t even begin to describe this short feature by animation master Koji Yamamura.  It will certainly be divisive, especially for those Annecy audiences who have never been keen on non-linear or abstract stuff.

With echoes of Yamamura’s short masterpiece, The Country Doctor, Dozens of Norths is a mysterious, befuddling, and hypnotic abstract work that defies categorization (though I’ve just attempted that very thing). The synopsis offers minimal guidance: "Here is all North. This is a record of the people I met in the North. However, my memory is fragmented and does not get the point at all."

First off, the imagery and animation is just beautiful. You can just sit back and savour the imagery. You can also approach Dozens of Norths like a picture book linked by an assortment of vignettes. In a sense, Yamamura’s film brings to mind Fernando Pessoa’s incredible book, The Book of Disquiet, which reads like a collection of memories from someone’s diary. Yamamura’s approach seems to be the same, a loosely connected set of moments and memories. Imagine if you went on a trip, say to Annecy for a week to attend the festival. Then you get home, get settled and rested, and finally start writing out your impressions of the experience. Memory is suspect, always. The result, if we’re honest, will be a series of cloudy fragments that, like all memories, never quite capture the experience accurately.