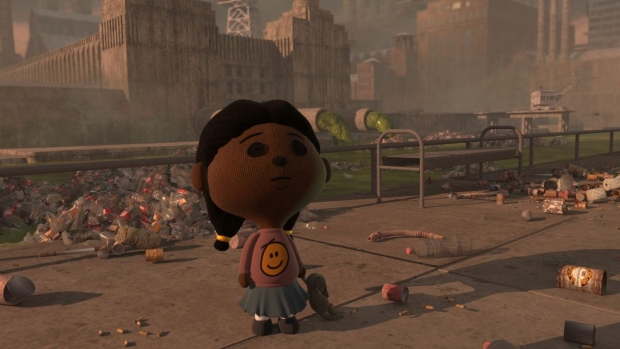 In Astronaut Spacemen, Patrick Gehlen’s charming, thought-provoking new CG animated music video, a brave band of scientists and a determined little girl try to bring a spark of life back to a badly damaged planet Earth. For Gehlen, a Los Angeles-based, Emmy Award-winning artist on shows like Game of Thrones and The Mandalorian, his film is an attempt to “address the threat of climate change that is already unfolding before us in extreme and possibly unstoppable ways.” His hope with the film is that is motivates viewers  to “fight for a sustainable, eco-conscious future for everyone, vote for politicians and lawmakers who share similar goals, and remember that however bleak things seem, we must never give up hope as we work toward a better future.”

The project began with a song by the musical team of Jared W. Kotler (the film’s producer) and George Vitray. “My friend, Jared Kotler, whom I’ve known since college, created this song,” Gehlen shares. “He sent it to me, saying how he thought it would make a great animated music video.  So, I listened to it many, many times and my interpretation of it grew into a story about saving the planet.”

He continues, “My wife and I have five nieces between us, and I want them to have a healthy world to grow up in. The rate at which the climate crisis has accelerated is truly frightening, so I wanted to do whatever was in my power to try to help spread a message about the importance of dealing with this threat before all hope is lost.” Produced from May – August this year, the short used an asset team of five as well as layout artist Kelly Nakasone and Danny Clark, who animated the run and walk cycles for all the main characters. Grammy Award-winning engineer Michael H. Brauer provided the sound mix; Gehlen wore most every other hat on the film.

Regarding design, he explains, “A faux, stop-motion feel with cute characters felt right to me. I suppose it's a bit of the ‘spoonful of sugar’ mindset when dealing with some pretty dire subject matter.  I also wanted to create something that parents could share with their kids to spark a conversation without scaring them.”

“I have a sawdust stuffed Winnie-the-Pooh doll on my desk that I've had since I was tiny, so I based the look of the characters on that type of doll, since he's been such a steady presence in my life,” he adds with a smile. “And because he's a tightly stuffed doll, it also eliminated the need for cloth sims.” According to Gehlen, the biggest challenge was coming up with a cool, and memorable look that could be accomplished on a very tight timeframe and equally tight budget. “Once I had the animatic done, I took the model of our little girl and put her in front of some future slums that I got from Kitbash3d,” he reveals. “I then did some render tests in Arnold, and the results were pretty great, right away. That's what gave me the confidence that this thing could actually get done with the look I wanted.”

The director has been thrilled with the film’s reception since its release. “My favorite reaction so far was from a schoolteacher who saw my link in an environmental group on Facebook,” he says. “She loved it and said that she was going to show it to all her students the next day, grade 4-8.”

Reflecting on the film and message he hopes audiences come away with, he notes, “It can be easy to lose sight of the irreversible environmental dangers unfolding around us when this year has brought us a seemingly endless range of hardships. I am an artist and an animator, and while I have written postcards to voters and phone banked to get out the vote, I felt the best thing I could do is create something that would help remind and inspire people to fight for a brighter future.”

He concludes, “Having worked for twenty years in the film industry helping directors, writers and studios bring their visions to life, I merged my talents with the musical gifts of my friend to create something to remind others to keep their chin up and keep persevering during this crucial time in history.” Dude! - ‘Rise of the Teenage Mutant Ninja Turtles: The Movie’ Arrives
‘Super Giant Robot Brothers’: A Milestone in Virtual Animation Production
‘Luck’ Aims to Bring Hope to Kids In and Out of Foster Care
Pre, Tech, and Post: The Many ‘Vizings’ of ‘Chip ‘n Dale: Rescue Rangers’
Hammering Out the VFX in ‘Thor: Love and Thunder’
‘DC League of Super-Pets’: A Family Film Produced by a Family
‘Light & Magic’: ILM’s Story of Family, Fun, and Pioneering Visual Effects
Eric Goldberg and Mark Henn Talk the Magic of Hand-Drawn Animation
END_OF_DOCUMENT_TOKEN_TO_BE_REPLACED