Brad Neely Channels his Arkansas Childhood in ‘The Harper House’

The ‘China, IL’ creator’s new 2D animated adult comedy, about a fun, wacky mom who loses her job, forcing a family move from riches to rags, fondly reflects his own upbringing in the razorback state; show premieres today on Paramount+. 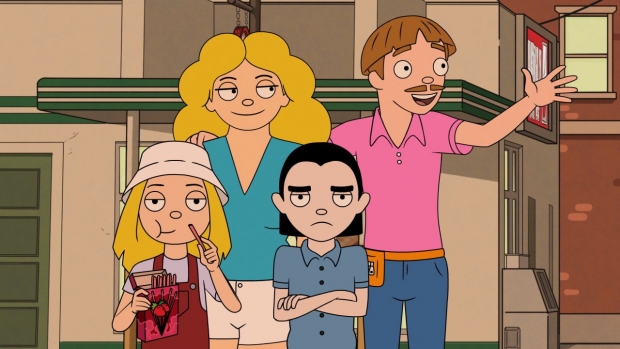 For over a decade, it’s been Brad Neely’s dream to create a show with his own version, as he puts it, of a “female Homer.” The China, IL creator and South Park producer’s new adult animated comedy, The Harper House premieres today on Paramount+, showcasing a confident, fun, wacky, mom who perfectly fits the bill as a The Simpsons family head counterpart.

But the series - centered on an Arkansas family of four forced to leave behind their rich and fabulous lifestyle when they move to the poor side of town after mom Debbie Harper loses her job - has a much more personal foundation than just a main character inspired by Matt Groening’s famous animated series.

The Harper House is based on Neely’s own personal experiences growing up in Arkansas. “When I was young, I had a similar move that the Harpers have,” remembers Neely, also known for his TV comedy series, Brad Neely’s Harg Nallin' Sclopio Peepio. “I went from the rich side of town to the more neglected side of town. And it was one of the best things to ever happen to me. I wanted to show that same experience through the Harper family.” “I have only a few ways that I draw, and this is one of them,” explains Neely of his button-nosed characters. “I’m glad you think the animation is sweet. I think so too. We really put the time in to get the characters and the backgrounds to feel good to the eye so that viewers will want to stay in the world for many, many seasons.”

It also helps that the series’ animation is produced by the Emmy Award-winning studio, Titmouse, a growing titan in the industry best known for their work on shows like Big Mouth. “Everyone has been very supportive in helping me achieve the show I initially envisioned, which was a big, dirty, family show with heart,” says Neely. “I’ve used Titmouse for well over a decade now for all my television projects. I feel that they understand me over there, they know how I like to work and what I’ll need. Chris, Shannon, Antonio, and Ben are incredible. Titmouse attracts great talent and I know I’ll have the best.”

Despite animation increasingly becoming a 3DCG world, it seems that 2D will always have a safe haven in the realm of adult animation. “2D just looks better to me,” says Neely. “I think CG looks like children’s animation and I think we all might associate that round, bouncy look with safe kid’s stuff.”

And a kid’s aesthetic definitely wouldn’t be the right fit for a series where corpses are found in closets wearing leather sex suits and where burritos are summoned out of cleavage. That’s where Neely’s 2D turns on the charm, inviting viewers into a bizarre, domestic world where a family realizes their move to the other side of the tracks wasn’t such a bad thing after all.

“I don’t want to give anything away, but it seems that episodes 5, 6, 8 and 10 are favorites for varying reasons,” says Neely. “For me, those episodes, while not exactly episodic, really work together as one big story. We start with the house, and we end with the house.” After working through a pandemic and subsequent lock downs, where Neely’s home office was his laundry room, the creator says he’s ready to offer audiences a story that’s, as he says, for “laughs, primarily.”

“But on top of that, I hope that they enjoy the wonderful talents of this cast,” notes Neely.
Actors Rhea Seehorn, Jason Lee, Tatiana Maslany, and Ryan Flynn deliver home run after home run. And then the supporting cast is incredible. I really lucked out with these people, and I am excited for the world to see just how good they all are.”

Brad Neely’s ‘The Harper House’ is now streaming on Paramount+.

Dude! - ‘Rise of the Teenage Mutant Ninja Turtles: The Movie’ Arrives
‘Super Giant Robot Brothers’: A Milestone in Virtual Animation Production
‘Luck’ Aims to Bring Hope to Kids In and Out of Foster Care
Pre, Tech, and Post: The Many ‘Vizings’ of ‘Chip ‘n Dale: Rescue Rangers’
Hammering Out the VFX in ‘Thor: Love and Thunder’
‘DC League of Super-Pets’: A Family Film Produced by a Family
‘Light & Magic’: ILM’s Story of Family, Fun, and Pioneering Visual Effects
Eric Goldberg and Mark Henn Talk the Magic of Hand-Drawn Animation
END_OF_DOCUMENT_TOKEN_TO_BE_REPLACED