Fred Patten talks about the definitive reference book on the history of Chinese animation. 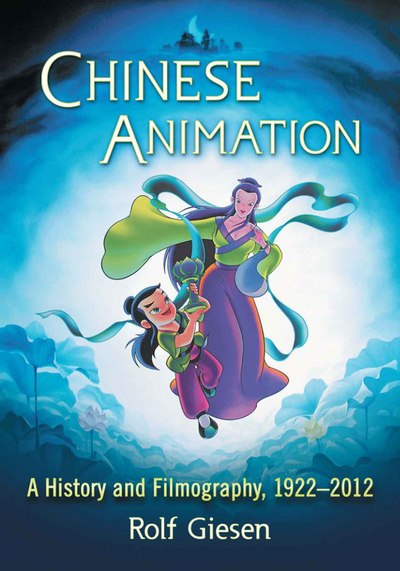 Chinese Animation; A History and Filmography, 1922-2012, by Rolf Giesen.  Illustrated.

Yet according to Chinese Animation; A History and Filmography, 1922-2012, “With an output of more than 250,000 minutes annually, and with roughly 5,000 producers and production units, the Chinese are leading the field of animated films,” (back-cover blurb). The American animation industry is certainly aware of Chinese animation, and of the Chinese market for animation.  “DreamWorks Animation and [Chinese President and General Secretary] Xi Jinping have announced a joint venture to build a major animation center in Shanghai,” (p. 3), a news article is quoted.  In 2012, the Walt Disney Company announced its own plans to help develop the Chinese animation industry, as part of expanding its own market in China.  The Chinese animation industry, long considered a creative backwater, has begun working to improve itself in the 21st century.

This is all from the Introduction.  The main part of Chinese Animation; A History and Filmography, 1922-2012 is its history, decade by decade, film by film.  Both drawn/CGI animation and stop-motion puppet animation are included.  Each entry lists the year, title, running time, director and other credits, synopsis, comments, and awards (if any).  The synopsis and commentary are very readable; even non-scholars who are interested in animation in general but not particularly Chinese animation will find this fascinating to browse through.  The book is profusely illustrated with posters, stills, and photographs of directors and production crews, in black-&-white, and there are 8 color plates with 16 illustrations.  The illustrations are large and sharp; some pages are mostly illustrations.  There is an Afterword, chapter notes, a bibliography, and an index.

The book is as complete as possible, including lost films. Giesen notes, “For some films, the only information about them is the title.  Even without further information, it was decided that their inclusion in this book would be valuable to readers,” (p. 9).

The decade-by-decade chapters start out very short, and grow as Chinese animation has grown.  An overview is followed by the films of that decade.  There are only five films listed for the 1920s.  Chapter 9, “2000 and On: Relaunching Animation in China” covering the government’s encouragement of the Chinese animation industry, is over a hundred pages.  Its sections include “Education in Animation,” and there is a selected list of noteworthy student films.  The coverage includes theatrical features and shorts, TV series, and animated advertising commercials.

If Chinese Animation; A History and Filmography, 1922-2012 is not the final word on Chinese animation, it will more than suffice until a more extensive book is written – which, considering the completeness of this one, seems unlikely.  Buy wherever there is any interest in international animation in general, and in Chinese animation in particular.

You can find more information on this book by visiting McFarland or calling their order line at (800-253-2187).

An Interview with Priit Pärn
‘Baymax!’ Provides an Rx for Humor and Compassion
How Digital Domain Brought Photoreal Characters to Life in ‘The Quarry’
SCAD GamingFest: Building Shared Story Experiences with Diverse Character Design
Mission Critical: ‘Lightyear’s Journey to Infinity and Beyond
Putting the Fun in Dysfunction: The Non-Humanistic Therapy of ‘HouseBroken’
‘The Freak Brothers’: This is Your Humor on Drugs
END_OF_DOCUMENT_TOKEN_TO_BE_REPLACED