Season 5’s standout sixth episode is yet another example of how Netflix’s Emmy Award-nominated hit animated comedy series continues to improve with age. 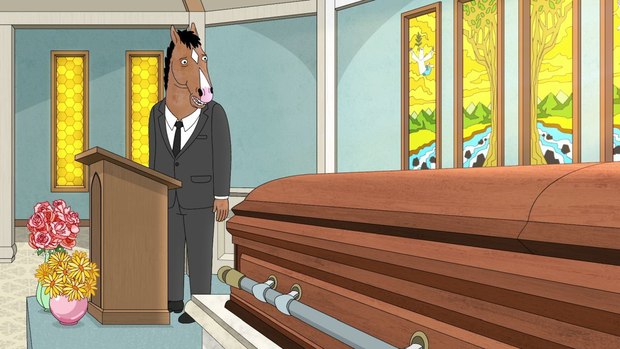 As demonstrated by a Primetime Emmy Award nomination for the Season 5 episode, “Free Churro,” Netflix’s hit animated comedy, BoJack Horseman, continues to prove its one of the smartest, funniest and most original animated shows being made today. Produced by Tornante Television and ShadowMachine, the Annie Award-winning show centers around an aging, self-loathing and washed up 90s TV star, BoJack Horseman, voice by Will Arnett, who lives in squalid Hollywood splendor finding newer and more audacious ways to treat everyone in his life, including friends, lovers and total strangers, with incredible disdain, contempt and utter disregard. But in a really funny, sometimes ironically poignant way.

For creator and executive producer Raphael Bob-Waksberg, the shows growing popularity and critical acceptance is an organic process fueled by an appreciative audience happy to share their support for the show with others. “I think the show has really benefited from word-of-mouth, people digging it and telling their friends to check it out,” he says. “I'm thrilled we've gotten the opportunity to grow over time. It feels like every season, more and more people are talking about it.”

That continued fan appreciation is fueled in no part by episodes like “Free Churro,” a tour de force devoted almost exclusively to BoJack delivering an impassioned, blissfully self-centered and inappropriately hilarious eulogy for his mother… at the wrong funeral. Consisting, for the most part, of our hero standing either behind or beside a memorial chapel podium, the episode is never-the-less spellbinding in its tone and acting. With never a dull moment. Not an easy task for what essentially is a 26 minute animated monologue. “Every season, we try to come up with new challenges for ourselves,” Bob-Waksberg continues. “We've gotten so much mileage out of the wonderfully detailed backgrounds on this show and blink-and-you'll-miss-them animal gags and rat-a-tat dialogue, it felt like a fun challenge to try to do an episode without any of those things! I don't think we would have tried something like this in earlier seasons, but by now I had tremendous confidence in Will as a performer to carry the episode himself, and in Amy as a director to create a much subtler animated experience.

The Amy in question is Amy Winfrey, who’s been a director on the series since the first season and was just nominated for the previously mentioned Outstanding Animated Program Primetime Emmy Award, along with a number of crewmembers, for “Free Churro.’ To her, it’s BoJack’s character that drives the show’s success, particularly this episode. “It's great to see that Raphael has this character that he can just let loose for half an hour… and it's compelling,” she states. “I really enjoy that about this episode. And, I love that there's a cheap animal joke at the end. That’s another hallmark of what I love about BoJack, that it combines these dark, heavy themes with goofball ideas.”

For Winfrey, her work on the episode started with the initial table read, which is when she first realized the significance of the material being rehearsed. “Raphael had written the script, and I got to watch Will Arnett run through it with everybody at the table read,” she shares. “And that was when I realized this was an episode where the writing really stood all by itself. I kind of wondered if I could pull this off. Everybody was a little bit worried about, ‘Is this going to be boring? Are we going to need to show the organist? Are we going to miss not seeing the audience the whole time?’ But, I felt that Will’s performance was so strong, that if I could just match that with pictures, given his acting at the podium, this would really work as an episode.”

Like with most episodes, on “Free Churro,” while Waksburg focused on the writing and voice recording, Winfrey focused on all things animation production. “Around the same time as Raphael was doing the voice record, I was going through the script,” she notes. “I'm pulling reference images, in this case, funeral homes, just looking through material to see what I want to pitch to Raphael about the look of the show and how I'm planning on staging the animation. In the case of this one, I looked at a bunch of funeral podiums and funeral homes, to figure out a nice look for the background that we're going to watch for almost an entire episode. I also showed him these camera angles I wanted to do, these three angle choices that reflected the stories within this episode, where BoJack switches between talking about his mother, riffing on things, and telling funny stories. The angle changes showed the change in these mini-stories that are within the episode.”

“I tried to pay attention to making the angle changes happen, not just at times that seemed interesting, but at a time in the script that seemed like BoJack was shifting tone,” she adds. “So, I had to make a lot of choices that were a little bit more deliberate than when I'm also trying to make Mr. Peanut Butter compete in a ski race for the governorship of California.”

In the script, the writers referenced the hit 70s show, Maude, where in one episode, Maude talked to a psychologist the entire time, who you only saw from behind. “Watching that episode was very helpful,” Winfrey says. “Even though she [Maude] could walk around the space a little bit more than BoJack could, it helped me to see how our episode could work.” Working from the voice recordings, Winfrey moved on to storyboarding. For this episode, she divided the storyboard work between several artists, which provided her different visual perspectives on how angles and cuts would support both the seriousness and absurdist comedy of the scenes. “Once we have the radio play, after the voices have been recorded, I start dividing up and talking through various areas of the episode with different board artists,” she explains. “In the case of other episodes, we would also pitch a lot of animal gags and talk through fun visual things. In the case of this episode, we just talked about how many interesting ways BoJack could gesture and how he should hold the podium, things like that. It was a good excuse to show off my board artists’ really fine skills at doing subtle acting.”

She continued, “It was always interesting to see the boards come together in the edit and say, ‘Where does my attention flag? Is this a moment when I should change the angle, or I should have him take a few steps?’ There were times when we’d add just a few steps to get him away from the podium for just a moment when I felt like things were maybe getting a little too regular. It did help a lot.”

On a BoJack production, the “thumbnail” pass, where rough boards are first developed, lasts about two weeks. On “Free Churro,” Winfrey then had between four and five weeks to clean up BoJack, clarify his timing, expressions, hands and acting and then create the final edited animatic before shipping it overseas for animation. “We do video conferences with the overseas studio, where we talk through the episode, but for the most part, everything needs to be in the boards,” she reveals. “We don't have a separate notes pass. It's just... they work from the animatic, which is split between quite a few animators. So, everything has to work well before we send it.”

After an episode is animated and returns to Winfrey’s team, work continues refining the performance. “Once the animation comes back, we get a chance to fix things up, which was important in this episode,” Winfrey notes. “We wanted to really fine-tune BoJack's expressions and everything, so we did a pass with animators here as well to get everything the way we wanted it.”

Like with all the episodes Winfrey has directed, “Free Churro” had its share of challenges. For her though, the biggest challenge is always her own leadership dynamic and how she gets the best performance from everyone on the team, including herself. “It's always a challenge to realize that you can't do everything, that you need to communicate effectively with people to get them to share your vision,” she admits. “And you also need to listen to people and realize that TV animation is collaborative, and everybody has the potential to come up with good ideas. We always sit and go through the scripts, trying to think of the funniest things possible. It doesn't matter who that's coming from. It’s all about working together to make it stronger and more interesting. That's the special thing about BoJack… we really try to bring out the best in the episode without stepping on any, ‘Oh, this is my vision.’ It's always, ‘Hey, how can we make this the best episode possible?’”

And for Winfrey, that selfless team effort lies at the heart of what she enjoys most about her work on the show. “That collaborative effort has been a delightful experience. Sharing an office with all the other directors… everybody on the show is a big fan. We enjoy what we do, and I think it shows. I'm finishing up today some directing on Season 6, and I think it's one of the strongest seasons yet. It all just keeps coming together.”