‘Birdboy: The Forgotten Children’ Takes Us to the Dark Side and Back 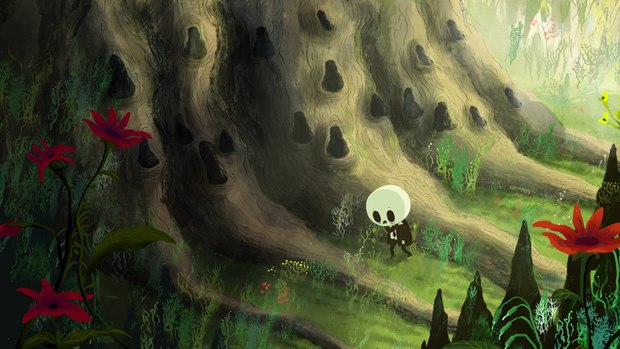 Set on a small island in a post-apocalyptic society, Birdboy: The Forgotten Children tells the story of Dinky and her friends who run away from home to try to save Birdboy and escape from the brutal reality of life on the island. Birdboy is a young bird, persecuted by the local police, who takes drugs in an effort to control his inner demons.

Directed by Alberto Vázquez and Pedro Rivero, the film is based on the comic book/graphic novel “Psiconautas” by Vázquez. The Spanish film with English subtitles won the 2016 Goya award for best animated film. It also recently qualified for consideration for the 2018 best animated feature Oscar. It was released earlier this month in the U.S. by GKIDS for its Academy Award-qualifying run.

Rivero explained that it took almost seven years to make this “modern fairytale.” And while the animation process itself was less than two years, the first five years were spent trying to line up financing and developing the story arc and the characters. “We never had the experience of doing a film before, but I knew there would be friction getting financing for a film like this,” he says.

He explained that they decided to start by doing a short film, simply called Birdboy, that they could shop around and test the appeal of the characters and the story, as “a sample of what the long-form could be. And then, even if we couldn’t get the financing, we would at least have the short film.” In addition, the short film gave them a sense of accomplishment during the long stretches when the project didn’t seem to be moving forward. “It takes so much time and you only have sketches and drawings, and over time it looks like you didn’t do anything, you didn’t accomplish anything.”

He added that “we were fortunate that the short film was very well received” and that the process gave them time “to reflect on how the story was going to be told and adapted into a feature movie.”

The directors worked with a small team of 15 artists to animate the film. Rivero explained that having the original comic in hand was no replacement for actual storyboarding, because “storyboarding is also look development.”

“The most fundamental primary difference is that in the comic you’re by yourself,” he says. “You stay in your head and on paper and you’re so free. It’s [inherent to] the medium, it’s cheap and it’s full of freedom. It’s cheap to edit comics.”

“Animation has a lot of complications,” he adds. “You need the team. You need producers, and there’s certainly the commercial interest. It’s very complex because you have to generate everything -- the winds, the music sounds, how they move, it has been a learning process. And it’s been wonderful.”

The film is animated in a unique style inspired by German expressionism, with a stark color palette used to draw out emotions.

“One of the most important things in the movie is the use of color, in the graphic sense,” says Rivero adding that the colors are symbolic and help express the mood. In the film, Birdboy finds sanctuary in a secret garden under an old tree, introducing the film’s only use of green. The rest of the island is a barren, wasteland of brown and grey. But the garden introduces a totally different color palette -- the vibrant greens of nature -- a symbol of life returning to the desolate island after a cataclysmic industrial accident of some sort.

Birdboy himself is a Jekyll-and-Hyde character, who takes drugs to suppress an untamed monster within. His nightmares and visions and the demons he wrestles with are depicted in a red and black palette.

“The color has to serve to push forward the feelings and emotions,” says Rivero.

However, Rivero revealed that he is, in fact, quite colorblind. “Fortunately, this film was very collaborative and I did not have to make those choices, for the good of the film and for the good of everyone involved.”

Rivero said that what he loves about working with animals is that they can appeal to audiences all over the world. “They’re universal. They don’t have a specific time or place. They belong to everybody,” he says. Co-director Vázquez says that he has no plans to make a sequel or revisit Birdboy’s dystopian island. “I think, with the size of this fable, it’s finished,” he says. “But we are working on other projects of course, and I love the contemporary fairy tales and you know, I’m still going to keep on working.”

He explained that the whole story is a metaphor about life, portraying the end of childhood as these kids have to face a new world.

“The characters have to face a new world and they don’t like the world. They have to rebuild it again -- that’s why the characters think about running away,” Vázquez explains. “In life you can’t run away that easily. And we have to come back to our island and fix it up a little bit.”

Vázquez says that he wants audiences “to experience all the emotions” in the film. “There is an intensity in the movie,” he adds, “but they should also take away some hope. Even though the movie is dark there’s still light at the end.”

In spite of the film’s very dark themes, Rivero says, “I see life as just a mix -- sometimes we have dark; sometimes we have light. Just because you work with darkness doesn’t mean your life is dark. It’s because these are themes that are interesting. It touches everybody. But it is not good to take it into your personal life.” SCAD Alumni Talk Animation Skills, Careers, and Opportunities
Digital Domain Pushes the Limits of Monstrous VFX in ‘Morbius’
An Interview with Priit Pärn
‘Baymax!’ Provides an Rx for Humor and Compassion
How Digital Domain Brought Photoreal Characters to Life in ‘The Quarry’
Mission Critical: ‘Lightyear’s Journey to Infinity and Beyond
‘The Freak Brothers’: This is Your Humor on Drugs
END_OF_DOCUMENT_TOKEN_TO_BE_REPLACED