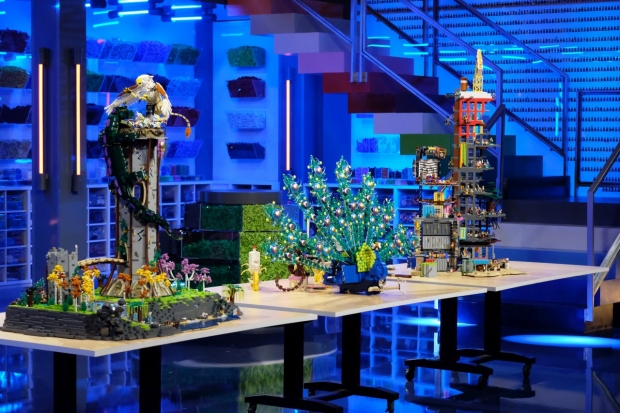 Has the quarantine got you down? Think you’ve already binge-watched every trashy reality show ever created? Think again! We bring to you LEGO Masters, FOX’s wholesome reality competition show, where each week, teams of contestants compete head-to-head in an ambitious, themed LEGO brick-building challenge. Who said reality TV had to be shallow and fueled with tired, scripted drama? Hosted by none other than LEGO Batman himself, Will Arnett, LEGO Masters has brought heart, fun, and whimsy to the rather tired unscripted TV genre. For decades, LEGO has spoken to those with a tinkerer’s heart and an engineer’s brain. Enthusiasts young and old delight in the simplicity of the bricks paired with the infinite possibilities of what can be created. And now, we can watch other people do the hard work while being rewarded with beautiful builds and animated companion pieces that inspire the little LEGO Master in all of us.

LEGO Masters executive producer and showrunner Anthony Dominici, a two-time Emmy Award winner for his work on The Amazing Race, has been an executive producer in unscripted television for more than 15 years. However, this is his first time working with animation.

For Dominici, stop-motion animation was always part of the show’s design. “Animation has been baked into the DNA of the show from the time that the folks at [series producers] Endemol Shine were pitching it,” he notes. As showrunner, Dominici is ultimately responsible for putting together and delivering each episode; in addition to his more conventional duties, he’s been particularly involved in the show’s animation and visual effects creation, working closely with Burbank-based Stoopid Buddy Stoodios, Culver City-based Charlie Co, and Sydney-based Mister on various pieces of the production. While Stoopid Buddy crafted the stop-motion animation, Charlie Co handled the virtual backgrounds, and Mister created the title and transition animations, like where the LEGO logo smashes into a pit of bricks. Mister’s intro graphics were already used in the Australian version of the show; those, along with transitions that hadn’t made it off the cutting room floor in Australia, were available for the new version. “They were great, so why go through the whole process of starting from scratch again when we love these graphics and we want to use them,” Dominici says. “We're a lot more, I would say, graphics heavy, than the Australian version, so we liked a lot of their work that hadn’t been used. All of our transitions and lots of little moments that have these little animated bits, they were handled by Mister.”

A fan of stop-motion since watching Nightmare Before Christmas, Dominici especially enjoyed working with Stoopid Buddy, the famed studio behind Robot Chicken. “From the get-go, from my very first conversations with them, they really got the tone,” he says. “We would consult with Stoopid Buddy, asking, ‘What would be the coolest story for you guys to animate?’ They were just wonderful at bringing the LEGO builds to life.”

While puzzling through how to present contestant build ideas through animation, Dominici decided, “We'll have the contestants themselves, the builders themselves, talk us through their story. [The LEGO build] It'll come to life as if you were playing with it because they're telling us a story; we're hearing it from their point of view, and it's really like you're seeing what’s in their mind come to life. The animators did an incredible job of capturing that dynamic. The contestants’ voice performances were basically interviews. They weren't acting. There was no script. It was, ‘Okay, talk us through these points,’ and then we did a radio edit of that material. Then from there, Stoopid Buddy would put together an animatic and it's like, ‘Whoa, this is going to be so incredible.’”

For the show’s virtual backgrounds, Charlie Co generated the 3D environments that brough the world of the animated builds to life. “In a few of the episodes, such as ‘The Theme Park 101’ and then ‘Mega City 105,’ all the contestants assembled their builds together into a super-build, like Voltron,” Dominici describes. “Now one building becomes 10 buildings, which is really cool. We shot plates for our beauty shots of the super-build, and then Charlie Co would go in and rotoscope all the background stuff, taking out everything that wasn't the build, which is pretty intricate. Then they put that into a virtual environment, customized to map to those final builds, giving them a great 3D background.”

Integrating different elements and styles of animation with various components of a live-action reality competition show posed quite challenging for the showrunner, who admitted, “The biggest challenge was managing the timeline. We had a really fast turnaround with our edit schedule. Getting everything needed into an episode, in time, and finding a way to seamlessly transition into a scene, was probably the hardest part. We knew we wanted to use animation, but it's like, ‘Okay, how do we integrate animation into a reality show without making viewers think, ‘What the heck is going on around here? What am I looking at?' It was difficult finding ways to make it feel like a natural part of the show.” “The other hard part was logistics,” Dominici adds. “Looking at material and quickly finding spots within an edit and saying, ‘Oh, it can go here, it can go there. When do we do it? When do we cut to this animation?’ We ultimately decided that usually it's best when, as the builders are telling their story, the build would just physically come to life in front of our eyes. It was a challenge finding a way to make it feel like a natural part of the show, rather than cutting away to tell a visual story as a little movie inside a TV show.”

The show builds upon LEGO’s appeal to people of all ages, lending itself to co-viewing that is extremely important in times like these, when families are forced together and choosing a show for everyone to enjoy is nearly impossible. “While LEGO building could be a very tedious and boring process to watch, we found a way to make it so that you can actually see the builder’s imagination come to life as you're watching the show,” Dominici concludes. “We're really proud about that.” Watch LEGO Masters on FOX or binge the whole series now on FOX.com to see up close some of Dominici’s brick-building programming largesse.