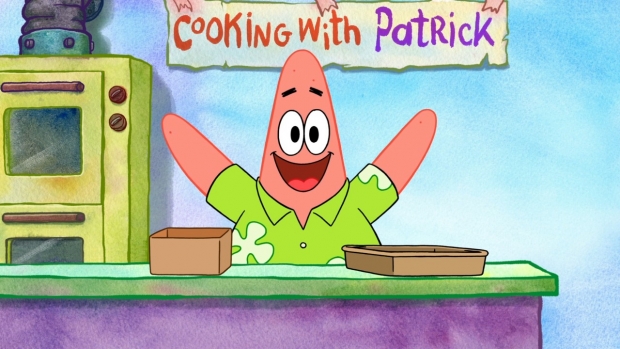 With 276 episodes across 13 seasons, 6 Annie Awards, 8 Golden Reel Awards, 4 Emmy Awards, 19 Kids' Choice Awards, and 2 BAFTA Children's Awards, Nickelodeon’s SpongeBob SquarePants is arguably one of the most successful series in animated television history. But when series creator Stephen Hillenburg passed away in 2018, the future of the Bikini Bottom universe and all its inhabitants seemed bleak.

Enter Marc Ceccarelli and Vincent Waller who, three years later, developed and co-executive produced the slap-stick comedy SpongeBob spin-off series, The Patrick Star Show, centered around Patrick Star and his family hosting a variety show from Patrick’s television-turned-bedroom. This past March, after wrapping the first season’s 18 episodes, the series was renewed for a second season; the complete Volume 1 is available today, June 21, on DVD from Paramount Home Entertainment and Nickelodeon Home Entertainment. “Vinnie and Marc created this wonderful idea very much connected to the SpongeBob universe and the nature of SpongeBob and to the nature of Stephen Hillenburg, too,” says actor Bill Fagerbakke, the famous voice of Patrick Star who reprises his role in the new series. “I'm honored to be a part of it.”

When The Patrick Star Show was first pitched, Fagerbakke – also known in animation circles for his roles as Big Bear in Young Justice, Alan Parrish in the Jumanji TV series, Bulkhead in Transformers: Animated and more – says he was uncertain about Patrick’s ability to stand on his own from SpongeBob, or if an entire series about the SpongeBob universe would be able to survive without the guidance of Hillenburg.

“To me, Patrick was only successful because he was with SpongeBob and, up until The Patrick Star Show, almost everything Patrick does is with SpongeBob,” says Fagerbakke. “And all those years, I was working with one of the most talented voiceover performers in history – Tom Kenny, a great stand-up comedian, a brilliant, instinctive performer. And then someone comes and says, ‘Ok, forget all that. Now it’s just Patrick.’ I was very anxious.”

Though getting to explore the character on his own has been “nerve-racking,” according to Fagerbakke, the actor also says the experience voicing in the spin-off has been “an incredible thing to be a part of,” with the writers bending the rules of the original SpongeBob universe to allow for more creative freedom while still paying due homage to its roots.

“Everyone that writes and draws for the show has great regard for what Steve created,” notes Fagerbakke. “They don't write with condescension or contempt because they wish it was their own thing. They're really working within that context to lift it up.”

From cooking specials and telethons for "Snails Who Can't Dance," to stop-motion Halloween specials and game-like parody battles with an evil Dust Demon, The Patrick Star Show has all the nostalgia Bikini Bottom fans remember, but with the Star family shenanigans that know no bounds.

“Every time the narrative jumps into a different world, it fills my heart with joy,” says Fagerbakke. “When I was a kid, I loved that kind of playfulness so much. And as a young adult, I loved it when I would watch Monty Python’s Flying Circus. So, I am so thrilled that The Patrick Star Show has a format that allows that to happen, because I think, frankly, that writers love to do that as well and you can tell that the beats are inspired.”

The new show’s popularity reminds Fagerbakke of how it felt to watch SpongeBob SquarePants gain traction after its first season run. While it may seem surprising to long-time fans of the series who spent most of their childhood watching SpongeBob and his friends’ adventures serving guests at the chaotic Krusty Krab, foiling Plankton’s dastardly schemes, netting jellyfish, discovering Davy Jones’ locker, or using their imaginations to make the most of a cardboard box, SpongeBob’s success came as a welcomed but unexpected surprise.

“One never assumes anything is going to have success,” says Fagerbakke. “When I first watched the pilot “Help Wanted,” where SpongeBob applies for a job with the Krusty Krab, I thought, ‘What an incredible cartoon. God, I hope it gets a chance.’ My kids were five and seven when we started on the air. And I remember, during Season 2, I would roll into the elementary school in the minivan to pick up the girls and there'd be 15-20 kids just running towards the van going, ‘Patrick!’ and I thought, ‘Oh my. Something is a-foot.’” And indeed, it was. Little did Fagerbakke, or anyone else on the production, know that SpongeBob SquarePants would go on to reign as the number-one animated series on TV for nearly two decades.

“Frankly, the show could have ended after three years,” says Fagerbakke. “It very possibly could have. But one of the great things about how Nickelodeon handled the show was they really let it develop organically. And I can't overstate the value of that. Because a lot of times in the production of children's entertainment, it's almost like a merchandising frenzy kicks in, where they say, ‘Okay, we need 50 episodes by April.’ And Nickelodeon never did that to Steve. He just wanted to concentrate on the cartoon and make it right. And so that provided the foundation of what everything else was built on.”

Fagerbakke describes the last 20+ years of being part of the SpongeBob universe as an “incredible, beautiful experience, and discovery,” and hopes that, as The Patrick Star Show goes into its second season, that it will continue to entertain not only kids, but the teens and adults Hillenburg had always intended these characters to speak to.

“There's something about the characters and the dynamics and how they interrelate that people just find that appealing and amusing,” says Fagerbakke. “I just hope [The Patrick Star Show] continues to work in conjunction with what we lovingly call ‘The Mothership.’ I have very little anxiety now because I see how locked in the writers are and how much they care and how much they share that value too. So, I don't worry about it. I'm just enjoying everything that happens.”

The Massive Creative Fellowship Behind ‘The Lord of the Rings: The Rings of Power’
‘The Dragon Prince’ Director Villads Spangsberg Talks Toonlines and Tough Challenges
Laurence Fishburne and Steve Loter Talk ‘Marvel’s Moon Girl and Devil Dinosaur’
Taking an Old-School VFX Approach in ‘All Quiet on the Western Front’
‘Natural Habitat Shorts’: Like ‘Ranger Rick,’ But for Adults
Framestore Sets Sail on ‘1899’ with New Virtual Production Tools
VFX is the ‘Thing’ for Tom Turnbull on Tim Burton’s ‘Wednesday’
We Need to Chat
END_OF_DOCUMENT_TOKEN_TO_BE_REPLACED