Bigger Can be Better: The Titanic Conclusion to Guillermo del Toro’s ‘Trollhunters' Franchise

Chad Hammes, Linda Chen, and Alfonso Blaas talk about scaling heights and finding balance in the production of DreamWorks Animation and Netflix’s 'Trollhunters: Rise of the Titans.' 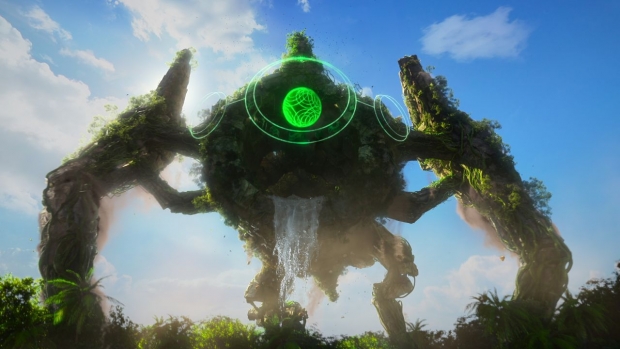 Nearly five years after the premiere of Trollhunters: Tales of Arcadia – the first installment of Guillermo del Toro's Emmy Award-winning, science-fantasy animated franchise – the final chapter has arrived. Trollhunters: Rise of the Titans, now streaming on Netflix, is a feature-length film that wraps up the story of Trollhunter Jim Lake Jr. and his friends, who inhabit a world populated by magic-wielding wizards, alien geniuses, battle-ready trolls, brave humans, fire-breathing dragons, and many others.

“I believe there were about 17 characters in the movie that had significant participation in the narrative story,” recalls executive producer Chad Hammes, a producer on the three previous Tales of Arcadia series as well, from Trollhunters and 3Below, to Wizards. “It is so rewarding when you are given a chance to finish a large narrative in a complete way. I am proud of how we went out with a bang.”

Created by Oscar-winning dark fantasy writer, director and producer del Toro, Trollhunters: Rise of the Titans is directed by Johanne Matte, Francisco Ruiz Velasco, and Andrew L. Schmidt. The film begins in the same place as the stories that came before, the town of Arcadia Oaks, which harbors a hidden world of magical creatures. In an effort to protect former Arcane Order member Nari, Jim and his friends Claire, Toby, master wizard Douxie, and other “Guardians of Arcadia” battle Order leader Bellroc. Unfortunately, the team loses Nari to Bellroc, and the Arcane Order summons three Titans of earth, snow and lava to destroy the world.

While perhaps not on the same scale as the emotional turmoil and heartbreaking sacrifices these characters are challenged with, the production team was also put through the wringer when it came to creating fantastical worlds on a bigger and more epic scale than ever before. “Each of the TV series in the Tales of Arcadia franchise raised the bar from its predecessor,” says Hammes. “When we embarked on the movie, we needed to look at everything we had done to date and understand how we would elevate it visually. It took an entirely different approach – world building, upgrading what existed from previous shows, and creating a recipe for seeing extremely complex shots in a mature state sooner than we normally would. This was necessary when considering how to execute the complex Titan shots – dealing with extreme scale issues while also being immersed in water, lava, snow, or having a living tropical forest walk across the globe. Of course, having Guillermo regularly saying, ‘all episodes must be great, not one can just be good…’ added to the challenge.”

Unlike the previous stories, Trollhunters: Rise of the Titans doesn’t take place primarily in one or two locations, but roughly half a dozen, from the familiar Arcadia Oaks to frozen wastelands, rainforests, city harbors, underground magical lairs, and more. But, according to art director Linda Chen, that wasn’t the biggest challenge the team faced. It was the scale of the battles.

“It was an incredibly daunting task to try and play with battle sequences with such huge variations in scale with the Titans,” notes Chen, who worked with Hammes on the three previous Tales of Arcadia installments. “But that was also always our focus. We knew the biggest hurdle would be the massive scale of these battles, and we wanted to explore what the fight would look like on an equal playing field, in terms of scale, with Gun Robot.”

Gun Robot is a giant, humanoid fighting machine created by the alien Akiridions to challenge the Titans. The awesome and destructive battle that ensues between Gun Robot and Bellroc’s Lava Titan in a city harbor – which takes inspiration from del Toro’s 2013 film Pacific Rim – plays with extreme variations in scale, from wide shots of two huge fighting powers controlled by human-sized hosts, to close-ups of Jim and his crew in their own battle on the sidelines. “As soon as we had the information and action maps from Guillermo and the directors, we started blocking the sets where our characters would fight,” explains production designer Alfonso Blaas, who also worked on the first Trollhunters and 3Below. “Some of them imply human scale only, others much more considerable Titan scale and, of course, combined scales [comprising] both huge city-wide angles and close-ups of human faces. Each fight had its process, but we had a pre-viz team that used our rough blocking models to help us analyze where to pay more attention to detail for the most complex battle sequences.”

In other portions of the film, characters Jim and Douxie actually climb onto the Titans to battle their hosts Nari and Bellroc, adding another level of visual diversity in which the Titans’ bodies become almost another world and setting.

“There was a lot of prior knowledge we'd gleaned from Pacific Rim in terms of how to handle weight and scale, but we tried to create our own unique battles, as our characters were fighting primarily with their own bodies,” explains Chen. “We wanted to see how our characters would handle the fight with these massive opponents and not only the thing that they're fighting, but also the stage that they're fighting on.”

But while the task was daunting, Hammes adds that it was also immense fun when it came to building and completely demolishing settings during these battle sequences.

“Building whole environments to be destroyed was something that was innately familiar, and charmingly reminiscent of being a child building structures out of wood blocks just to see how they eventually smash apart and become a pile of rubble,” says Hammes. “I did a lot of this as a young boy, and it was great to do it again decades later.” While smashing, sword-fighting, spellcasting and all the other elements that make up these intense action scenes are natural ingredients in a Tales of Arcadia feature, and help make Rise of the Titans one of the most epic Trollhunter adventures, Hammes and the rest of the team also wanted to make sure they didn’t go overboard with the action.

“Finding that balance was an editorial nightmare,” remembers Hammes. “We had much more fighting and action in the first pass of the animatic. But we laboriously kept trimming, taking shot after shot out, then putting shots back in, re-staging camera, etc. Eventually you find that sweet spot.”

And in the end that “sweet spot” is a film that focuses on the true heart of the series: its characters.

“While we needed to make sure the movie had that epic feeling at every moment, the relationships that have been built between these characters, their own personal arcs, are what holds it together, and ultimately, why we root for these characters,” says Chen. “From the beginning, Guillermo del Toro was incredibly focused on the emotional and quiet beats of the film.”

Hammes adds, “It’s so important to get the viewer invested in these personas. They must care for them and want to know more. It’s easy to get caught up in the action of a story, but action doesn’t drive a story. Character does.” Over the years, Hammes, Chen and Blaas all say they have become deeply invested in the stories and characters of Tales of Arcadia, learning from del Toro how to create a “proper story” and “a main character that the audience can connect to,” as Hammes puts it. Now that the journey has come to an end, it’s an emotional conclusion on a personal level for each of them.

“It's incredibly bittersweet for me,” says Chen. “I've spent most of my career on this franchise and it truly holds a special place in my heart and has set my career on a path that was unexpected. I will really miss all the people and the team that we built with this property, but I'll always be proud of what we accomplished. I feel like this feature, really this whole franchise, has taught me so much to be the designer I am now, especially with the leadership of Alfonso.”

Blaas adds, “My first contact with Trollhunters was nine years ago and I have felt inspired since then. I grew from a texture artist to production designer and the feeling of wrapping is deep and emotional, but full of satisfaction. I put everything I had on the table and received tons of experiences, friends, opportunities back. I am truly fortunate for my time in Tales of Arcadia.”

But to Hammes, much like the ending of the film itself, it seems that this is just the beginning.

“I feel good to move on to the next thing that Guillermo, myself, and our immensely talented team can be challenged with and force us to go to an even higher level of narrative and visual complexity,” says Hammes. “I am sure Guillermo already knows what’s coming next for us!”