‘Big Nate’: An Ode to the Envelope-Pushing ‘Nickelodeon of the 90s’

Featuring 2D and 3DCG, along with stop-motion stylings, John Cohen and Mitch Watson’s series about a spirited, rebellious, and semi-incompetent sixth grader, based on Lincoln Peirce’s comics, harken back to a more risk-taking period in the network’s history. 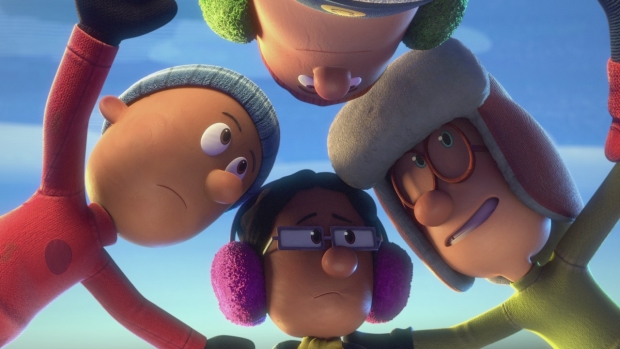 After roughly three decades in limbo, an animated series adaptation of Lincoln Peirce’s 1991 comic, “Big Nate,” has finally been produced, debuting yesterday, September 5, on Nickelodeon after hitting Paramount+ on August 19.

“Lincoln Peirce always knew that he wanted ‘Big Nate’ to be an animated series,” explains executive producer John Cohen, known for producing on Despicable Me and Hop. “But what we found in some of our early conversations was that a lot of studios could only envision it in live-action, like the original Diary of a Wimpy Kid movies, for example. But we felt strongly that these are cartoon characters – like The Simpsons or Peanuts – and they don’t age. Working with Nickelodeon and the amazing team on the show has been a dream. From day one, they saw it exactly the same way we did.”

Produced by Cohen’s company, John Cohen Productions, and Nickelodeon Animation Studios, the animated series, Big Nate, follows the adventures and misadventures of titular protagonist Nate Wright, a semi-incompetent, spirited, and rebellious sixth grader and his friends Francis, Teddy, Chad, and Dee Dee, as they face off against hated social studies teacher Mrs. Godfrey – also known as “the school's Godzilla” – along with the firm Principal Nichols and killer robots. Nate’s a self-proclaimed “idea man” and artist, whose mission is to make middle school not awful. Featuring 3DCG and 2D animation along with stop-motion and Claymation stylings, the series displays a hodgepodge of creativity, an ode to what series creator Mitch Watson calls “Nickelodeon of the ‘90s.”

“I wanted to return to the Nickelodeon I grew up with, where things were a bit more risky and envelope-pushing then,” says Watson, who also executive produces with Cohen and is known for his production work on Kung Fu Panda: The Paws of Destiny. “To me, that era is what set Nickelodeon apart from Disney. For me, Big Nate was a chance to push the medium of animation into places it hasn’t traditionally gone in TV. I have done several CGI shows, and with each one, the technology has gotten better and allowed us to take more risks. The fun part for me is trying to achieve something different that both kids and fans of animation will enjoy.”

He continues, “I wanted to play with lighting, and I also wanted to give it a stop-motion feel – with the CGI being shot on 2’s – to evoke the nostalgia I have for the old Rankin/Bass cartoons. We also had Lincoln’s wonderful 2D art in the mix, and I finally got to explore my love of cut’n’paste animation. In later episodes there is also Claymation as well as live-action elements.” Pierce has been actively involved in all facets of the show’s production, from design to animation. He has also written on every episode.

“Lincoln supported what we wanted to do right from the start, and he’s been involved every step of the way,” says Watson. “All of the characters had to be adapted to CGI, which meant they had to be reconceived to a certain degree. Lincoln was instrumental in helping us maintain the integrity of his designs. As for the stories, he reads everything and punches up every script. On top of all that, every episode ends with an original four-panel comic about the show.”

Cohen adds, “Mitch Watson, David Skelly, Jim Mortensen, and Sam Koji Hale have created an incredible style for this series that incorporates all kinds of animation into one very unique vision.  We really wanted the show to have its own distinct stylistic approach, and I believe the team has achieved that beautifully.

During the 90s, as Watson notes, Nickelodeon was also known for exploring outside the box narratively, creating programming that spoke to audiences of varying ages. It’s a feature that the Big Nate team wanted to incorporate into their animated adaptation, in which the stories are all original.

“The best way to adapt something is to maintain the emotional core of the material while still making it your own,” says Watson. “In terms of story content, the show is almost entirely original, with many of the episodes satirizing social constructs. By doing this, the shows are allowed to play on two different levels; one for the kids and one for the adults (who are very likely watching with their kids). As a parent myself, that co-viewing was very important to my vision of this show.” Watson, who was approached by Nickelodeon’s president of animation, Ramsey Naito, about working up a pitch for the show, found right from the start that he already had a connection to Pierce’s material before pulling together the first scripts.

“The reason Ramsey thought of me, and the reason I was interested, is because there is a lot of my personality in Nate, especially when I was younger and wanted people to notice me,” admits Watson. “Like Nate, I thought the best way to get attention was to cause trouble. Hint: it isn’t, but it does make for a really fun show.”

Meanwhile, Cohen had been a long-time fan of the “Big Nate” comic strip and books and had actually reached out to Peirce a while back.

“Big Nate is so genuinely funny with a level of sophistication that I don’t often see, so I was very excited to be able to help bring these characters to life in animation,” says Cohen. “Big Nate is truly made for everyone in the audience. The comedy plays just as well to me as it does to my eight-year-old and five-year-old daughters. With the dual perspective on the kids and the faculty/parents in the show, it both reminds me of experiences I had in middle school, while also brings to life situations I’ve encountered as an adult.”

He continues, “The sensibility and comedy are very much cut from a similar cloth as shows like Curb Your Enthusiasm and The Simpsons, especially in the way that comedic situations escalate and continue to twist and turn.” Cohen and Watson have continued to expand the world of Big Nate, which was renewed for a second season back in March, with a combination of characters that Pierce created as well as brand new characters that have been developed for the animated series.

“In Season 2, we introduce some brand-new characters, including Nate’s eccentric grandparents, and a bunch of stories come to fruition that have been set up throughout Season 1,” says Cohen. “There’s a lot of exciting stuff coming up that we’re not yet able to share, but I can’t wait to talk about it very soon. The show is a labor of love for our entire creative and production team, and we hope to continue telling stories with these characters for many years to come.”

Though the series did have its initial release on Paramount+ back in February, Big Nate’s Nickelodeon premiere is a chance to induct new fans into Nate’s school halls of fame and fiction. “I feel what makes the show unique is the way we approach the stories,” says Watson. “First, we try to stay away from the traditional animated show tropes – circus comes to town, my best friend just got famous and now he doesn’t want to hang out with me, etc. Most of our stories work on two levels: as character explorations and as societal satire. So, if you were a fan of Nickelodeon in the ‘90s, like crazy, artist-driven visuals, or are looking for some great co-viewing with your kids that everyone can laugh at regardless of age, give it a shot. I don’t think you’ll be disappointed.”

The first of Big Nate’s 17 episodes aired yesterday – new episodes will debut Fridays on Nickelodeon. No release date has been set for Season 2.