Executive producers Mark McCorkle, Bob Schooley and Nick Filippi talk about the new season of their Emmy Award-nominated animated series, which premieres today on Disney XD and DisneyNOW, and how the Big Hero 6 team faces off against a new villain and his team of evil mascot robots. 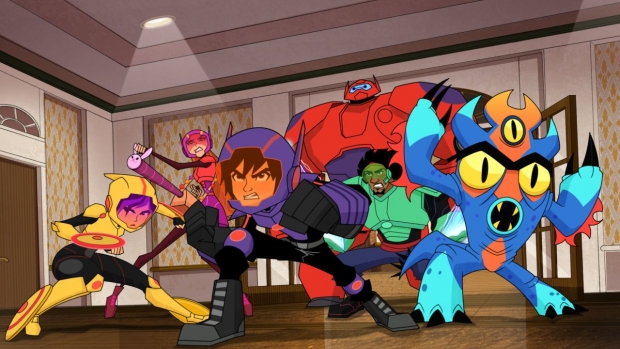 With Season 3 of Big Hero 6 The Series premiering today on Disney XD and DisneyNOW, Hiro, his cutting-edge robot Baymax, and their friends Wasabi, Honey Lemon, Go Go and Fred once again embark on a season of high-tech adventures protecting their city from an array of scientifically enhanced villains. This time, to protect San Fransokyo, they face off against Noodle Burger Boy and his team of evil mascot robots.

For the show’s executive producers, Mark McCorkle, Bob Schooley and Nick Filippi, the team behind the Emmy Award-winning hit Disney Channel series, Kim Possible, Season 3 will bring even more interesting stories as well as some different visual styles. “The new season explores the summer after graduation for Wasabi, Honey Lemon and GoGo,” Schooley shares. “So, it's taking us to some places we haven't been before and exploring the world outside of the school. We have an episode where we dig more into the Chibi world that we established in other episodes. In general, this season has a looser approach to the animation, in trying some different stylistic transitions.”

McCorkle reveals, “On the villain side, Noodle Burger Boy steps up to be the mastermind who creates this new family, to fill this void in his life. When he assembles this team, they are going to create a lot of mischief and chaos for our heroes and the city of San Fransokyo.” “Visually, in Season 1 and 2, it would not be uncommon to do a split screen,” he continues. “But this season, our team pushed the boundaries where we might do a split screen and a character actually reached across the split and interacts with the scene they are next to. We're being a little more experimental in a lot of ways this season. Story ideas, they usually come out of character. It usually has to do with a character and a situation and deciding if it will generate the laughs and surprises that we want to happen.” Comparing Season 3 production to past years, Filippi explains they were able to reuse some assets, though his team “usually adjusted or added to them.” Noting episodes take around a year to produce, he goes on to say that the show’s design, and animation, have always been difficult, if for the simple reason that “we’re taking CG animated characters from a feature and translating them into hand-drawn, which has its challenges.”

Deriving a 2D animated series from an Oscar-winning 3D/CG Disney animated feature was no small feat, from the narrative to the technical, though the trio had plenty of material to start with. “On the one hand, a great deal of time, effort, work and a team of really talented people established characters and dynamics, so a lot of the heavy lifting already happened,” McCorkle says. “But then the challenge is, you have to live up to the quality of a Walt Disney Feature Animation piece. When we first saw the movie, we thought it lent itself perfectly to a series.” In describing the show’s audience appeal, Schooley says, “I think the strength of these characters and their relationships…kids really relate to tight friendships and it's a very comforting situation that kids really respond to friends that are like family.” McCorkle concurs. ”Family,” he says, “is such a universal need. There are some situations that put you in a position where you count on your friends in a way that is above and beyond.  It touches a strong emotional reaction.”

“We have an amazing team,” Filippi concludes. “Our crew is like a family, they go above and beyond to make compelling, impactful and fun episodes.”

Big Hero 6 The Series is a production of Disney Television Animation and carries a TVY7-FV parental guideline.

Choc Chip Animation Riffs on Pop Culture in ‘The Art of Murder’
F is for Flake: The (Not So) Great Animation Robbery?
Re-VIEW: ‘Avatar: The Way of Water’ – A Miraculous Vision
‘Kung Fu Panda: The Dragon Knight’ Celebrates a Special Lunar New Year
END_OF_DOCUMENT_TOKEN_TO_BE_REPLACED